The formal experiment of "Unfriended" is intriguing. Here is a movie that takes place in real time and in which everything we see is limited to whatever is on the screen of the main character's computer. The concept is not new, of course, although this might be the first time that such a conceit is portrayed without any attempt at embellishment. Director Levan Gabriadze and screenwriter Nelson Greaves restrict the characters to the space immediately near their computers, save for a moment in which one character picks up his laptop and walks around his house.

The movie possesses two fatal miscalculations: 1.) All of these characters are self-absorbed, unsympathetic bores; 2.) It simply is not very interesting to watch video chats and text messages, particularly when the participants are of the sort described in item No. 1. The majority of the movie is spent staring at static web browser and program windows on Blaire's (Shelley Hennig) desktop. Within those windows are smaller video boxes featuring close-ups of her friends or text bubbles featuring the written exchanges between two characters in the typical, lazy shorthand of online communication. One imagines the shortcut to a dictionary program in the bottom left of the screen is an inside joke for those who prefer proper spelling and grammar in their written communiqués.

Through these exchanges, we learn that, a year ago to the day, a teenage girl named Laura (Heather Sossaman) committed suicide after a video of her in an embarrassing, drunken stupor emerged online. Blaire and her boyfriend Mitch (Moses Jacob Storm) start a sexually charged video chat that involves him wielding a knife and "jokingly" threatening her with it if she doesn't remove her shirt. He's a real stand-up guy, that Mitch.

Their conversation is interrupted by a group chat with three other friends: generic best friend Adam (Will Peltz), stuck-up brat Jess (Renee Olstead), and requisite computer whiz Ken (Jacob Wysocki). Later, the slightly-less-stuck-up Val (Courtney Halverson) joins them, but the friends' communications are also being monitored by an anonymous user who seems to have access to all of Laura's online accounts. Maybe the link to an online forum post with the title "DO NOT ANSWER MESSAGES FROM A DEAD PERSON" is a warning. The capitalized letters certainly seem to be a giveaway. The story about a woman who answered a text message from her dead husband and killed herself a week later is definitely one.

Superficially, this is a horror movie, although its distinct lack of such important elements as mounting suspense and genuine scares forces us to think otherwise. As suggested before, the movie is an attempt to accurately recreate the experience of a lengthy stay in front of a computer screen. As such, most of the movie's stabs at tension involve staring at the spinning circle of a video that's loading, the long pauses between instant messages when the person on the other end is occupied with something else, watching files download, and Blaire typing and deleting—and re-typing and again deleting—various messages to the ghost in the machine that is probably the spirit of the girl that she and her friends drove to commit suicide. By the way, almost all of the characters state in one way or another that Laura "had it coming." They're such relatable people, this lot.

The characters, of course, must die off one at a time. They do eventually and in increasingly silly, confounding ways that Gabriadze milks for cheap, blatant jump scares (The final, anticlimactic one especially feels like a rushed afterthought). A little bit of credit is due to Greaves' screenplay for creating a techno-ghost with a sense of humor. In between the obvious moments of terrorizing its victims, the phantom plays with the teens' insecurities and secrets. After a sexual betrayal is revealed, Blaire's playlist of contemporary pop music is replaced with an oldie about lying. The movie's funniest scenes are unintentional, such as a lengthy game of "Never Have I Ever" that quickly turns into a melodramatic showdown and two uses of a blender that the appliance's inventor likely never imagined.

In case it isn't clear by now, the movie has a message: Cyber-bullying is bad. "Unfriended" is, one supposes, partially an overblown attempt to scare people straight about that despicable trend, but instead, the movie might just make people associate bullying with a hollow, tedious endeavor that lacks any satisfaction. Hey, that could work, too. 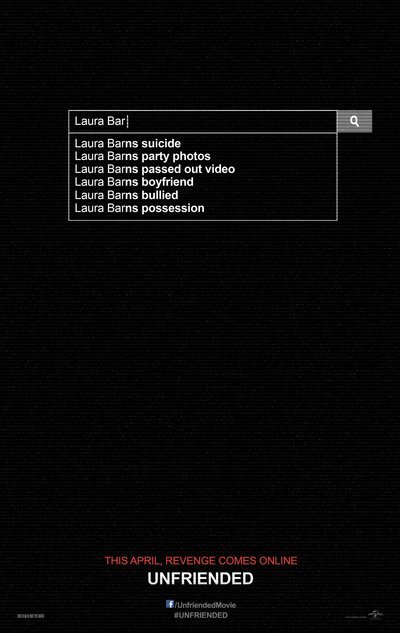 Rated R for violent content, pervasive language, some sexuality, and drug and alcohol use - all involving teens