There's a certain kind of guy who operates with disarming vulnerability, revealed only later as manipulative. People like this are often heads of companies, they give heartfelt Ted Talks, sometimes they start cults. In "Spin Me Round," Nick (Alessandro Nivola) is such a man. He is the CEO and founder of Tuscan Grove, an Olive-Garden-type franchise, where you can get a three-course meal for $13.95, and the sauce is poured onto the rigatoni from a giant squeeze bag. Nick has a dazzling smile, an easy air, and he tears up when he mentions his dead sister. It's so obvious from the outside that Nick is not on the level, but to the inexperienced Amber (Alison Brie), he's dazzling. His so-called vulnerability hypnotizes her.

"Spin Me Round," directed by Jeff Baena, and co-written by Baena and frequent collaborator Brie, is filled with such complicated yet subtle characterizations, characters so familiar you feel a shock of recognition upon meeting them: "Oh, okay, I know who this person is." You then sit back and enjoy the ride. For the most part, the ride is a fun one. "Spin Me Round" is part travelogue, part comedy, part female-self-empowerment narrative and part Henry Jamesian cautionary tale (an American woman is thrust into the corrupt European elite). This is a lot to fit together, and Baena doesn't quite manage it. The film is best when it comments on the style on display, showing us the familiar and then undercutting it. The poster for "Spin Me Round" is an imitation of the cover art for a romance novel, complete with fiery sunset and heaving bosom. Subversion is the name of the game.

Alison Brie plays Amber, who manages a Tuscan Grove in Bakersfield, California, where she grew up. She has been in the job for nine years, and doesn't seem at all happy about it. At one point, her brittle smile fades, revealing an expression like a dead-eyed silent scream expression. Amber's life is passing her by. This all changes when she is picked to attend a manager's conference at something called the Tuscan Grove Institute in Italy. The managers will learn about Italian cuisine in a gorgeous setting. Amber has never been out of America. She is beyond excited.

Immediately upon arrival, she realizes something is not right. She is forced to surrender her passport to Craig (Ben Sinclair), the bearded burly conference organizer, with a not-quite-nice gleam in his eyes. The managers were supposed to stay in an Italian villa. Instead, they are put in a cheap motel. Amber's room looks out on a row of dumpsters. Even stranger, the managers are given a curfew and not allowed to leave the grounds. The cooking demonstrations are given in the nondescript conference room in the motel.

The other managers are played by a murderer's row of talented actors. There's Deb (Molly Shannon), who latches on to Amber as her new best friend. There's Fran (Tim Heidecker), who considers himself an expert in Italian cuisine, and bores everyone to tears. Jen (Ayden Mayeri) is bubbly and clueless (she holds a cucumber up to her mouth, waggles it like a cigar, and says, "Look, I'm Karl Marx!"). Susie (Debby Ryan) has brought ecstasy and does it with Jen. Instant soulmates. And finally, there's Dana (Zach Woods), in love with the Tuscan Grove franchise, and in awe when he meets Nick the CEO.

At Nick's side is a mysterious figure named Kat (Aubrey Plaza), who seems at first to be his assistant, glumly smoking cigarettes outside, and giving the confused Amber meaningful glares. One day, Kat invites Amber to play hooky. Amber is thrilled. Kat then drives her to the seaside, where Nick's yacht is docked, and leaves her there to spend the day sailing with Nick. Amber is thrown off, but Nick glimmers with vulnerable tears and is charmingly self-deprecating. He asks her off-putting personal questions, which Amber answers. He's testing the boundaries. There are red flags everywhere, but Amber is blissed out. When they return to shore, Kat sits waiting in the car, scowling like a thundercloud.

It is impossible, at this point, to avoid the thought of Ghislaine Maxwell. Is Kat Nick's procuress? Is Amber being delivered into the hands of a predator? Is Amber unaware that, for all intents and purposes, she is being trafficked? Amber gets deeper into the inner circle: Nick invites her to a party, and Kat buys her a sexy gown. Everyone at the party is rich, and they too take a disturbing interest in Amber. Multiple people tell her she seems so "open-minded," even though Amber doesn't project that at all. Meanwhile, back at the motel, the cooking classes continue, Deb lurks outside Amber's door, and Dana slowly begins to see that Tuscan Grove is perhaps up to no good.

The mood-changes here are startling. Every scene is interesting, and the film is often quite funny, but Nick's world is so seemingly dark and twisted, it's difficult to reconcile the two halves. Baena's work often includes strange juxtapositions like this, tragedy alongside comedy, horror alongside humor, the films wriggling free of genre expectations. His first credit as a screenwriter was "I Heart Huckabees," after all. Baena's work as a director ("Joshy," "Life After Beth," "Horse Girl") is a little uneven, but when it works it works. 2017's "The Little Hours," based on a story from The Decameron, is a straight-up French farce, where horny medieval nuns spout contemporary snarky dialogue and chase around the hot male in their midst. It's hilarious. Baena attracts an impressive roster of actors, and it's not hard to see why.

There's a subversive black heart throbbing at the core of "Spin Me Round," otherwise a lightly entertaining comedy. You don't expect a subversive black heart to "go with" light entertainment. Even when things "work out," as of course they must because it is a comedy, there have been glimpses of such ugliness and darkness it's hard to shake it off. But maybe we're not meant to shake it off. Maybe the sometimes uneasy juxtaposition of different moods and styles is what it's all about. Baena is obviously having fun presenting the familiar tropes and then subverting them, but these pieces don't really fit together, nor do they lead to a satisfying conclusion. The subversive black heart needs more room to play.

Now playing in theaters, available on digital platforms, and streaming on AMC+. 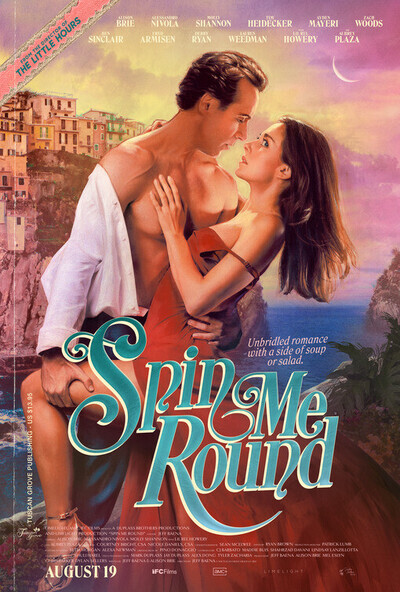