“Life After Beth” gets into the well-tread zombie-comedy territory in a clever and inspired way. Then it doesn’t get out of it nearly so skillfully.

The feature debut from writer-director Jeff Baena, who co-wrote the 2004 existential comedy “I Heart Huckabees” with David O. Russell, begins life as a surreal slow burn. Mopey, twenty-ish Zach (Dane DeHaan) is mourning the death of his girlfriend, Beth (Aubrey Plaza, Baena’s real-life girlfriend), who suffered a snakebite while hiking. Unable to let her go, he finds solace by growing closer to her parents, Maury and Geenie (John C. Reilly and Molly Shannon)—showing up at her house, snuggling in her colorful knit scarf despite the summer heat and staying up all night playing chess (and sharing a joint) with her equally bereft dad.

Baena effectively conveys the fog from which Zach cannot extricate himself, and the disconnect from society that envelops and comforts him. Zach’s own parents (Paul Reiser and Cheryl Hines, in barely-there roles) are helpless and clueless; then again, they hardly even try. And his militant security-guard brother (Matthew Gray Gubler) stridently urges him to snap out of it.

But then, on one of his many visits to Beth’s house, Zach thinks he sees fleeting glimpses of her through the windows. And he’s right—because she isn’t really dead. She might have been at one point, but now she’s something else entirely. She looks like Beth and sounds like Beth (for a while, at least) but now she listens to smooth jazz, worries about some vague test she needs to study for and spends way too much time up in the attic. These intriguing personality quirks initially form a central mystery but end up going nowhere.

Because as it turns out—and this isn’t a spoiler, folks—Beth is a straight-up zombie, but she doesn’t know she died in the first place, and her parents don’t want to upset the family’s renewed happiness by telling her. This sets up a few instances of amusing, hectic comedy, but it’s one of many ideas in the movie that don’t feel fully fleshed out, if you’ll pardon the inadvertent pun.

Baena poses a potentially mawkish question—what would you do if you had a second chance at love—in an offbeat, unsentimental way. And that’s the most interesting element of “Life After Beth”: the way it causes us to wonder what state Beth’s in, exactly, whether she’ll be discovered and how far Zach will go to rekindle their romance.

In time, “Life After Beth” morphs from a dark comedy with some glimmers of horror to a straight-up horror film with some glimmers of humor. It’s a tough transition to make. Edgar Wright’s brilliant “Shaun of the Dead,” to which “Life After Beth” surely will draw comparisons, set the standard for this sort of tonal shift. Beth’s zombiedom, however, leads to an inexplicable uprising of the undead, which ends just as quickly for whatever reason. Did she open some sort of portal? Does everyone think they’re in the Michael Jackson “Thriller” video? Similarly, Baena seems to have glossed over the interior logic when it comes to Beth herself. Sometimes she’s predatory; sometimes she’s romantic. The tension should be building, but instead it just sort of shuffles along.

Zach, meanwhile, is defined exclusively by his grief. Who is he? What does he want to be? What does he like to do? The character is entirely reactive. DeHaan can have an unsettling presence, as he’s shown recently as the villainous Harry Osborn in “The Amazing Spider-Man 2” and as the seductive Lucien Carr in “Kill Your Darlings.” Here, he just doesn’t get much of a character to play, despite being in every scene.

Plaza seems game as she navigates a huge range, both physically and emotionally—from sweet and demure to confused and excited to unhinged and ravenous. She’s in the tricky spot of having to pull off some of the film’s more complicated combinations of instincts, as she sometimes must be adorable and terrifying at the same time. Her off-kilter appeal serves her well here. If only it were in the service of better material. 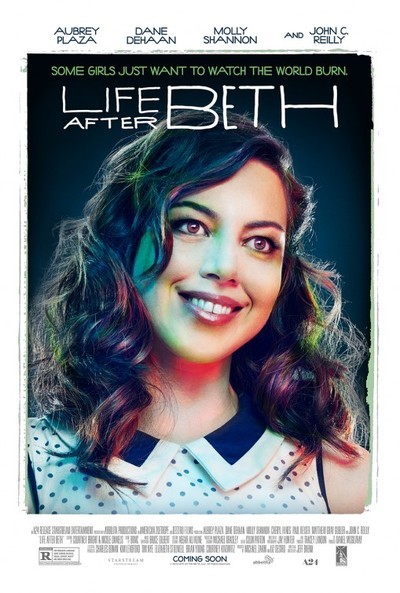