Alison Brie stars in “Horse Girl” as Sarah, a socially awkward craft store employee whose mental health is rapidly deteriorating. The history of mental illness within her family, particularly that of her grandmother, is not on the forefront of her mind as images from her dreams start to blend into reality. Written by Brie and director Jeff Baena, "Horse Girl" ambitiously tries to show such a decline from the perspective of someone who can't tell the difference.

The film is also directed by Baena, who has fashioned his own type of hangout movie. “Joshy” was hanging out with the guys after Joshy's fiancée has killed herself; “The Little Hours” was hanging out with some nuns in the Middle Ages. “Horse Girl” has a similar ambling quality, following Sarah around through her day-to-day interests. There are numerous scenes, accompanied by a dreamy synth score, of her interacting with her favorite horse Willow, or watching her favorite supernatural crime show “Purgatory,” or visiting her mother’s grave. There are also numerous instances of Sarah waking up somewhere random, or having dreams of two random people that she does not know. “Horse Girl” blends these seemingly mundane details with her growing belief she's a clone of her grandmother, and a time traveler, and it makes for a slow change of what behavior is normal for Sarah, and what is not.

The film’s study of Sarah and her mysterious psychological state lead to an entire third act of a breakdown, an extended sequence that's worth pointing out in a review because it makes "Horse Girl" worth seeing. It’s one of Baena’s most accomplished sequences in all of his films, creating a distinct trippy quality using practical elements like costume design and pacing. A full odyssey through previously established parts of Sarah’s life, its blurred lines of dream and reality help further articulate what Sarah is going through.

“Horse Girl” balances a tricky tone that wants to show Sarah’s actions as idiosyncratic, and later as detached from reality, all while presenting her as lovably naive. It even starts off with typical Sundance-approved quirkiness, the craft store job setting (and her conversations with a co-worker played by Molly Shannon) making for something that’s pleasant, and a little goofy. The same goes for a subplot in which she starts dating a guy named Darren (John Reynolds)—once he makes her feel comfortable about believing in aliens, Sarah airs out other intense fixations, and it's more awkwardly tragic than darkly funny about where she takes Darren as a surprise after dinner. It’s a complicated, ambitious tone, and you can see why Brie and Baena went after it. But it’s almost as if the movie changes what it’s trying to do from right under your feet, and it runs the danger of sometimes feeling like you’re still watching a quirky comedy, even though things have gotten especially dire for Sarah.

And yet if there’s ever a moment in which “Horse Girl” itself seems a little lost in what it’s trying to accomplish, there’s always Brie’s performance to hold onto. It’s no big stretch to call it her best one yet across film or TV, especially in how she contains so many big emotions for such a reserved character. Able to move between them in an instant, she captures the delicacy of Sarah’s brain, and also the sense that she’s progressively afraid of it—that her mental state is terrorizing her. Even without knowing that Brie wrote the script, her performance has the power of someone who urgently wants to convey every step of Sarah's descent using the language of acting, without the script offering its own strict diagnosis. The sincerity that Brie brings to her full-fledged embodiment of mental illness is major, and in turn helps “Horse Girl” overcome its tricky storytelling.

This review was filed from the 2020 Sundance Film Festival on January 31st. 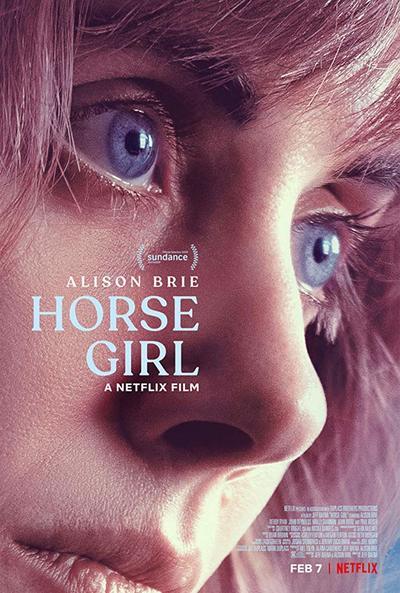 Rated R for language and some sexuality, graphic nudity and drug use.