For better and for worse, “Joshy” believably creates the sensation of a low-key weekend hang with a bunch of bros. You probably wouldn’t want to spend that much time with these people yourself, but at least they’re never boring.

With his second feature, writer/director Jeff Baena improves on his ambitious but tonally inconsistent zombie comedy “Life After Beth." He’s assembled a group of skilled improv actors with roots in TV comedy, indie film or both and worked with them to develop their own dialogue from a treatment. They lived together in a few rented houses in the pastoral (and trendy) getaway destination of Ojai, California, and shot in chronological order. Many of them were friends or had worked together before, and that familiarity gives the film a comfortable, lived-in vibe, despite the underlying tension that frequently simmers between the characters they’re playing.

The shaggy, meandering nature of “Joshy” makes it unpredictable, but it also makes it a little loose to the point where the pacing slacks a bit. While the main characters are all distinct, they also don’t feel like fully developed people. And an embarrassment of casting riches means we only get tantalizing, too-quick glimpses of engaging actors like Jake Johnson, Lauren Graham, Alison Brie and Baena’s real-life girlfriend, “Life After Beth” star Aubrey Plaza.

Thomas Middleditch of HBO’s “Silicon Valley” is the star this time as the sweetly understated title character. Joshy’s engagement to the briefly-seen Rachel (Brie) ends abruptly at the film’s start. (You may read what happened elsewhere; I’m not going to spoil it for you here.) But when his best friend, Ari (Adam Pally), realizes four months later that he can’t get the deposit back on the house he’d rented for the bachelor party, the guys decide to head to Ojai anyway to lift Joshy’s spirits for the weekend.

Joshy, Ari, the swaggering Eric (Nick Kroll) and the uptight Adam (independent filmmaker Alex Ross Perry) comprise the group initially. But Eric then invites along his equally loud-mouthed buddy, Greg (Brett Gelman), whom nobody else knows, to up the party factor. Eventually, they all meet up at a local bar with Jenny Slate’s Jodi, who’s in town celebrating her birthday and who strikes up a flirtatious connection with married, new-dad Ari.

So, what was supposed to be a no-stress weekend for a few friends to get together over beers and board games turns into an increasingly raucous extravaganza of drugs, hot-tub hopping, strippers and more. Not the most novel concept for a film, it’s true. But what keeps “Joshy” intriguing is that none of these activities are as pleasingly wild as they’re supposed to be. Something always goes wrong—or at least goes off-kilter.

“Joshy” is at its best when exploring the way men in their 30s regard each other—how they feel each other out and try to one-up each other even as they’re establishing their own ever-shifting identities. Kroll and Perry in particular engage in an enjoyable push-pull as they passive-aggressively try to exert control over the direction and tone of the weekend. And the always adorable Jenny Slate brings a much-needed, warm female presence as their random, new friend.

But even though many of their improvised exchanges are entertaining, a lingering sense of “Who are these people?” leaves the movie ultimately feeling unsatisfying. Real-life married filmmakers/actors (and indie darlings) Joe and Kris Swanberg show up with their young son about halfway through for no apparent reason and leave just as quickly. And a third-act confrontation with the parents of Joshy’s ex-fiancée (Paul Reiser and Lisa Edelstein) takes the film in a suddenly darker, jarring direction from which it never quite recovers.

Still, maybe the best way to view “Joshy” is how you would approach a weekend vacation with a bunch of your own random friends: with low expectations and the assumption that whatever happens, happens. 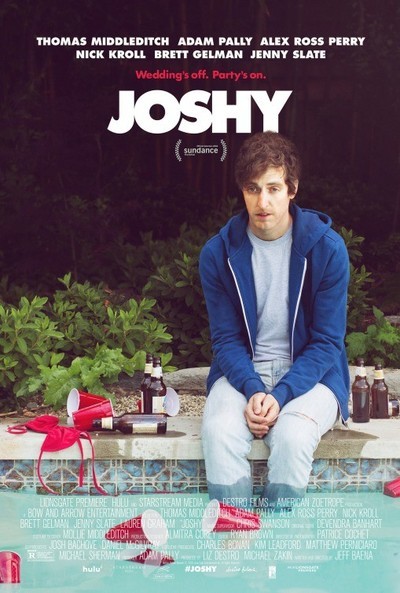 Rated R for drug use and language throughout, sexual content/nudity and a disturbing image.