“Spare Parts” attempts to be an updated version of “To Sir With Love” with 100% less Lulu but a whole lot more science.

Now, I love me some Lulu and will always cherish that cinematically mod time capsule from 1967. But at least this most recent testament to the importance of education has much more on its brain than, say, dancing to groovy pop ditties. Besides, science is hot right now as shown by the likes of “Interstellar,” “The Theory of Everything” and “The Imitation Game.”

It helps immensely that the film’s star, producer and Sidney Poitier fill-in, the eminently likable George Lopez in a rare dramatic role as a PhD-toting engineer forced to be a substitute science teacher, is clearly wearing his own heart on his sleeve in this true-life underdog story. Just as Poitier ended up serving as a mentor and father figure to his Cockney charges, Lopez’s Fredi Cameron inadvertently becomes more than just an temporary instructor to the four Hispanic teens who beat the odds – as well as college-age teams hailing from MIT, Cornell and Virginia Tech – by winning a nationwide robotics contest.

But what truly saves “Spare Parts” from being just a glorified after-school special is that these Mexican-born kids, who attend a scrappy working-class high school in Arizona, are all undocumented immigrants who live in constant fear that they or family members could be deported at any time. And without a birth certificate or other proof of citizenship, their chances for achieving their dreams are severely limited.

The issue of so-called “illegals” could not be more timely and, if “Spare Parts” does anything, it attempts to humanize the situation of those children who cope with this limbo-land existence without having had much choice in the matter.

But admirable intentions can’t entirely cover up major narrative flaws, and director Sean McNamara (who was behind the faith-based biopic “Soul Surfer”) spends too much time on the forced domestic melodramas and personal travails that each of the four students face and not enough on actually fleshing out their personalities. In fact, what should have been the main event – the actual competition that serves as the finale – arrives almost as an afterthought. Even Lopez’s character turns out to have a heart-wrenching reason for his current situation, but it just gets lost in the shuffle.

Each of the young actors has a distinctive appeal that isn’t entirely capitalized upon and their rapport with Lopez and each other is what should be front and center. Making the biggest impression is Carlos PenaVega as Oscar, a driven-to-succeed senior whose undocumented status stands in the way of him pursuing his dream of enlisting in the Army. Instead, he turns to Lopez and asks to start a robotics club so he can enter the contest, which involves building an underwater vehicle.

He ends up recruiting three other members: Cristian (David del Rio of “Pitch Perfect”), a bullied computer geek who is the brains of the operation; Lorenzo (Jose Julian, Demian Bichir’s son in “A Better Life”), a shaggy-haired mechanical whiz who isn’t above breaking into vehicles now and then; and Luis (newcomer Oscar Guitirrez), a gentle giant who provides the muscles to carry the vehicle in and out of the water.

Of course, Lopez must have a love interest and she arrives in the welcome form of Marisa Tomei (in her second film opening this week besides “Loitering With Intent”) as a supportive fellow teacher who assists with some of the programming details involved with the robotics project. Naturally, she is a single mom with a sassy grade-school-age daughter who looks askance when Lopez shows up at their door. He quickly explains: “We have a coding lesson. That’s not even a euphemism.”

Also on board is Jamie Lee Curtis as the school’s unconventional principal who could easily be related to Eve Arden’s principal in “Grease” as she makes announcements on the PA system about an anger management club that is mandatory “for the especially angry” and comes up with not exactly by-the-book solutions to disciplinary problems. And it is good to see Esai Morales of “La Bamba” fame looking handsome as ever, even if he is stuck with a thankless role as Lorenzo’s perpetually disagreeable father.

But, in the end, “Spare Parts” proves to be more exhausting than it is inspiring. No A for effort here, just a passing grade for at least attempting to shine a light on a continuing problem that plagues the immigrant community. 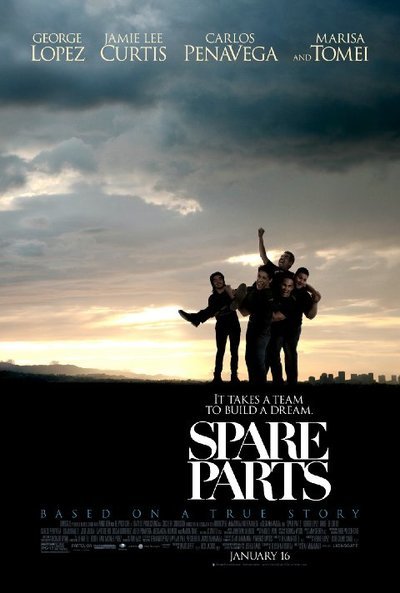 Rated PG-13 some language and violence