When the brain trust at Sony Pictures Animation decided a few years ago that the Smurfs, the unremittingly chipper cartoon creations of the Belgian artist known as Peyo, were worthy of the big-screen treatment, they made the inexplicable decision to present both “The Smurfs” (2011) and “The Smurfs 2” (2013) as live-action/animation hybrids. The creatures were be rendered as slick CGI creations, voiced by the likes of Katy Perry, John Oliver and the late, great Jonathan Winters, and interacted with the flesh-and-blood likes of Neil Patrick Harris, Sofia Vergara and Hank Azaria. While the two films made money, they didn’t exactly engender the kind of audience devotion, even among younger viewers, to warrant continuing down that same path. Therefore, when it came time for the inevitable reboot, the decision was made go for the full animation approach instead. While “Smurfs: The Lost Village” may not be better or more entertaining, the acknowledgment that it is aiming solely for the kiddie audience this time around at least makes it slightly more palatable than its predecessors.

As is seemingly the case of nearly every Smurf project of note, “Smurfs: The Lost Village” is concerned with the existential plight of Smurfette (Demi Lovato), who is not just the only female Smurf in existence but the only one whose name doesn’t serve as a handy descriptor as to their central purpose in life. Of course, this is because Smurfette is not precisely a Smurf per se as she was once a piece of clay brought to life by the fiendish Gargamel (Rainn Wilson), as part of one of his plots to snag the creatures and harness their magical powers for his own malevolent purposes. Happily, avuncular Smurf leader Papa Smurf (Mandy Patinkin ... yes, Mandy Patinkin) filled her with Smurf magic that turned her from evil to good (and which changed her from a brunette to a blonde, but never mind). One might think that not having your life story mapped out by your name would be a blessing but this nevertheless sends poor Smurfette into the depths of despair—of course, being a Smurf, those depths aren’t all that deep.

Anyway, Smurfette has a breakthrough moment when she wanders a little too close to the wall separating the Smurf village from the Forbidden Forest. She spots what appears to be another Smurf before it disappears through the wall, leaving behind only questions and an oddly colored hat. Since she and her friends are supposedly the only Smurfs in existence, Smurfette is curious and surreptitiously sneaks out, along with friends Hefty (Joe Manganiello), Clumsy (Jack McBrayer) and Brainy (Danny Pudi), to journey into the Forbidden Forest for answers with both Papa Smurf and Gargamel in pursuit of them. After a journey that not even the most sensitive toddler would describe as “harrowing,” they stumble upon a veritable Lost City of S where—wait for it—all of the Smurfs are females (with voices supplied by the likes of Ariel Winter, Meghan Trainor, Ellie Kemper and Michelle Rodriguez ... yes, Michelle Rodriguez) under the watchful eye of SmurfWillow (Juila Roberts). Although wary at first of each other, the two groups learn to work together as a team to fight off Gargamel and save their respective villages.

Considering that all a film of this type has to do to be considered a success is hold the attention of a bunch of tykes for 90 minutes, “Smurfs: The Lost Village” sort of achieves that particular goal (there were no noticeable meltdowns in the audience that I saw it with) but doesn’t really try to do much of anything else. The storyline is silly, will seem overly familiar to anyone with even the slightest past exposure to the franchise and stretches the traditional sad moment before the inevitable happy ending for so long that it may wind up upsetting some of the more sensitive young viewers who haven’t grasped that it's all just a story. I must also confess to being a little disappointed by the lack of imagination on display in regards to the new tribe of Smurfs that are encountered—aside from their gender (which is more of a concept in the Smurf world than anything else) and the color of their hats, there is hardly any difference between them and the more familiar ones. This will presumably prove beneficial to the makers of the merchandise, who can presumably retrofit older models into the “new” characters with a minimum of time, money and effort but won’t do a lot for anyone else.

That said, I must also confess that even though the film more or less made me itch as a whole, there were a couple momentary diversions. The trek through the Forbidden Forest offers up a number of cheerfully surreal visions that are genuinely striking—sights such as a glow-in-the-dark bunny rabbit and plants that are essentially eyeballs on stems are rendered in wild color patterns and presented with such wild abandon that they come close to evoking the madness of such old-school animation legends as Max Fleischer and Tex Avery. I also found myself chuckling towards the end when a character is being chased by something and starts yelling out “Smurfentine,” in obvious homage to one of the high points of the Alan Arkin and Peter Falk classic “The In-Laws” (1979).

Of course, any review of “Smurfs: The Lost Village” is an exercise in pure futility—if you are old enough to be interested in reading a review of it, you are almost by definition too old for it and parents just want to be assured that it won’t traumatize their young ones. To that end, while I cannot recommend it in good faith, I can assure parents that as a way of keeping the kids occupied for 90 minutes or so, it more or less gets the Smurf job done. 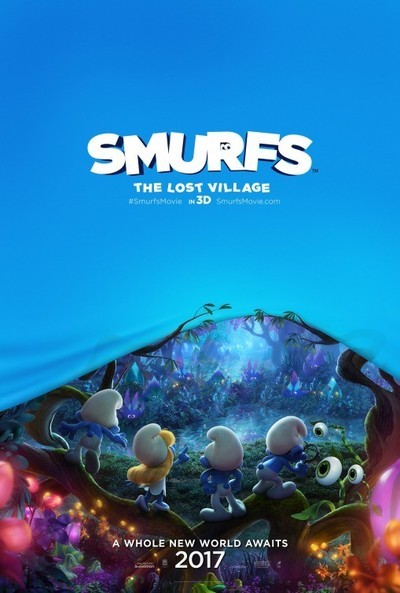 Rated PG for some mild action and rude humor.

Writer (based on the characters and works of)