Sin City: A Dame to Kill For

It's been nine years since the release of "Sin City," a collaboration between Robert Rodriguez and Frank Miller, with its dark crime-novel heart, surreal visual style and some chewy performances by a cast game to aim for the cheap seats. The style was lifted right out of Frank Miller's books almost shot for shot in some cases; the books used as a storyboard. "Sin City" was all gleaming car grilles and seedy bars and tortured men lurching their way through the grim streets, casting gigantic shadows. Mainly black-and-white, with red lips or green eyes shining out of the monochrome, the film looked like a noir on acid, or a grisly crime photo by Weegee, overexposed until black and white are reversed. The voiceovers, weary and dispirited, came from the James M. Cain flat-affect playbook. Some of the vignettes held together better than others, but overall, it was hugely entertaining, an exercise in style that pushed the envelope as hard as it could. It felt fresh. That is not really the case now as "Sin City: A Dame to Kill For" is more of the same, basically, only now in 3-D, which adds some cool effects but it's not really necessary.

Robert Rodriguez approaches the material with the same enthusiastic vision that pulses off the screen, each image tweaked for maximum drama. The cast, some re-creating their roles from the first film (Mickey Rourke, Jessica Alba, Rosario Dawson, Jamie King), and some new characters (played by Ray Liotta, Lady GaGa, Christopher Meloni, Christopher Lloyd, Joseph Gordon-Levitt and more), are all great, exhaling the hopelessness and desperation of living in a city overtaken by sin.

The vignette-structure returns, with a couple of additions written by Miller expressly for the film. At some points the film lags, loses focus, especially in the segues between vignettes where you can hear the gears creak. Thank goodness it's so pretty to look at, and it is fun to count the references to classic films. "Sin City: A Dame to Kill For" starts with a snowy Saturday night in Marv's brutal, haunted, and angry life (Mickey Rourke). He stops off at the nudie bar to watch Nancy (Jessica Alba) dance, his anvil-shaped head glowering out at the world. He breaks up an atrocity about to be perpetrated in an alley by a bunch of preppy jerks. He has bouts of amnesia. It's "same ol' same ol'" for poor lonely Marv.

Joseph Gordon-Levitt appears in another vignette as Johnny, a reckless card shark, determined to infiltrate a high-stakes poker game run by a villainous senator (Powers Boothe, gloriously horrifying) with a shady past and a taste for cruelty. Johnny is a whiz at cards, dealing them out to the table with lightning-quick speed, astonishing everyone present. Nobody wins against the senator. The senator will kill you if you cross him. But Johnny will show him. It's personal.

"Nancy's Last Dance" involves Alba's character haunted by the apparition of Hartigan (Bruce Willis), staring at her from the back of the bar, a protector still. Nancy is not doing well, drinking too much, crying in her dingy apartment, hacking her hair off, her every thought starting to swirl toward payback.

And finally, Eva Green enters the scene as Ava Lord, the "dame to kill for" in the title. She is reminiscent of every black widow woman from every film noir ever made: Lana Turner wrapping John Garfield around her little finger in "The Postman Always Rings Twice" or Barbara Stanwyck playing Fred MacMurray like a violin in "Double Indemnity." One kiss with Ava Lord and, forget it, you're willing to do anything. There is one scene where Ava, totally nude, dives into her pool, and Rodriguez shows it to us doubled, two white nude bodies diving towards each other through the black, the water splashing out at us whitely in 3-D. It's a kaleidoscope moment, a Busby Berkeley nod, a perfect evocation of the dizzying effect this sociopath has on the men unfortunate enough to cross her path. Dwight (Josh Brolin, taking up the role played by Clive Owen in the first film) has a past with Ava, knows she is bad news, and yet there she stands at the doorway, in her bright blue silk coat, ravishing against the black-and-white scenery, and what is a man supposed to do? Eva Green plays Ava with a great and controlled relish, bringing on the crocodile tears or her sexuality or her helplessness when she needs them, her green eyes gleaming cunningly out of her black-and-white face.

Both Rodriguez and Miller have come under fire for their tendency to classify women as angels or whores, and to display their bodies in ways that often make you feel as though you've strolled into an exploitation film from about 1974. But "Sin City" is clearly an homage to noir-inflected thrillers and comic books in which women are cunning creatures, willing to trade their sexuality for money to gain advantage or protection. The men are often more physically or economically powerful than the women, but they also tend to be naive and dumb in ways they can't see because their vision is fogged by lust. Rodriguez/Miller's presentation of women may be one-note, but it's not nearly as reductive as the one offered in teenage sex comedies like the recent "Behaving Badly," or in the films of Judd Apatow, where women's only power comes from being passive-aggressive and petulant.  At least in "Sin City" women are full-on goddesses: powerful and awful, with big needs, willing to go to the mat to get what they want. In other films, the flat portrayal of women seems like a failure of the imagination. In "Sin City" it seems like full immersion into the values of cartoon pulp.

"Sin City: A Dame to Kill For" doesn't have the electricity of the original, mainly because we've seen it all once before. Nothing new is really revealed here, either through story or style. But Rodriguez and Miller are completely committed to their vision, such as it is, and its ferocity can't be easily dismissed. 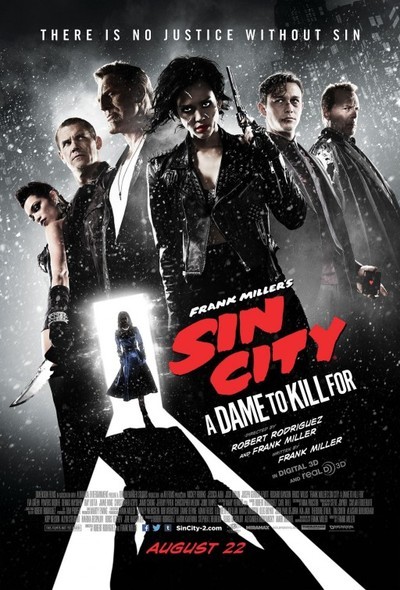