What a grim experience.

Mainly incompetent, "Behaving Badly," directed by Tim Garrick (he also co-wrote the screenplay with Scott Russell, adapting it from a book) tries to maintain an ironic and cynical tone, hoping that irony and cynicism will automatically translate into "comedy." It doesn't. What ends up happening is that the so-called irony tips over into Tucker Max-esque nihilism from almost the first moment of the film, which could certainly be funny in some cases but isn't here. The proceedings are then complicated further with half-assed spiritual considerations that are barely taken seriously by the film-makers and yet clearly are meant to be taken very seriously by the characters, as well as a sweet and shmoopy romance that doesn't work at all in the craven environment set up in the film. I found myself grasping at straws, a desperate woman, as I watched: The principal (Patrick Warburton) was doing some funny character work. And Selena Gomez is adorable and manages to float away unscathed. But other than that, it's an unfunny comedy, populated by irredeemable sociopaths.

Rick Stevens (even his name sounds fake) is played by Nat Wolff, who was so troubled and interesting in "Palo Alto," and he plays a similar character here. Rick, like Ferris Bueller, talks directly into the camera and narrates his own life, although without Ferris' charm or humor. His face shows no expression as he tells us all of the horrible things that have been happening: his mother attempting suicide, a dead body found in his trunk, etc. The film opens with a shot of his bulging crotch, and his deadpan voice telling us that, on top of everything else, he has crabs. Things go downhill from there.

Rick's mother (Mary Louise Parker) is a falling-down drunk who goes to rehab every April, bottle of vodka stashed in her purse. Rick's older sister Kristen (Ashley Rickards) is a stripper who is applying to Stanford. Rick's father (Cary Elwes) is out of the picture, except when he shows up begging to borrow Rick's video camera for nefarious purposes. Rick, clearly, has some strikes against him in the DNA department.

He is secretly in love with a girl named Nina Pennington (Selena Gomez), who is so pure that she wants to be a priest when she grows up, and spends her free time volunteering. Rick pays strippers for awkward blow-jobs, and then brags about it, and also makes a bet with a kid at school that he can somehow bang Nina.

At the same time as all of this is going on, Rick is also busy losing his virginity to his best friend's mother, Mrs. Bender (poor Elisabeth Shue, whom I wanted to airlift out of her own scenes to safety). Mrs. Bender comes on to Rick the second her son leaves the room, and Rick stammers, "Are you trying to seduce me, Mrs. Bender?" "The Graduate" did it better.

"Behaving Badly" wants to have it both ways. It wants to be a gross-out comedy, with bodily functions spewing forth in almost every scene, and naked girls, and kids behaving badly, and debauchery, and horrible parents, and oh, how funny and gross it is when women over a certain age still want sex. But then it also wants to have a serious sweet side, where our hero contemplates what God wants him to do, and where he gets to have an innocent pay-off kiss with the saintly girl of his dreams. There are other films that do manage to have it both ways, but "Behaving Badly" isn't one of them.

The view of women is appalling in "Behaving Badly," which I suppose shouldn't be a surprise, but it's disheartening nonetheless. Women are either pure, and therefore valuable and worthy of respect (when they're not being plotted and schemed over, that is), or they are sexually active, and therefore monstrous and diseased. Good times. In one of the scenes involving a stripper, the stripper whips her shirt off, exposing her breasts, and Rick the narrator drones to us, "I know this is bad, but..." and then the scene rewinds again and again and again to show her taking her shirt off, three times in a row. 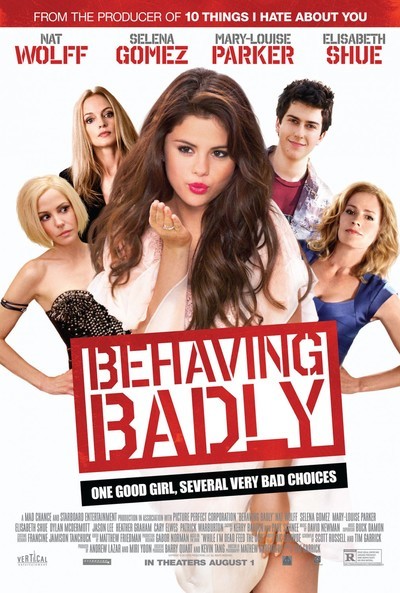 Rated R for crude sexual content and language throughout, some graphic nudity, and drug material