There's a small moment in "Shirley," directed by Josephine Decker, which is a perfect metaphor for Shirley Jackson's brand of literary horror. Jackson (Elizabeth Moss) sits on a couch at a faculty party, staring with hatred at the peppy prettily-dressed faculty wives, and then deliberately pours her glass of red wine onto the sofa. Horrified, the elegant hostess rushes over, and when Jackson tries to rub the stain off, the hostess gasps, "Don't rub it! Dab!" She's more horrified that Jackson doesn't know the proper method of stain-removal than about the stain itself. The moment expands in significance the more you think about it. There are women who know you should "dab" a stain, and there are women who didn't get the memo and instead rub the stain, making it worse. The women who "dab" banish the women who "rub" from the sisterhood of women: women who "rub" are beyond the pale and should be shunned for all time from polite society. If this sounds overheated, pick up a collection of Jackson's short stories. Jackson wrote about ghosts, haunted houses ... but she also wrote about the claustrophobia of small village life and the treachery among women. Facing down ghosts is child's play compared to facing down a group of gossiping judgmental housewives. Josephine Decker understands this kind of dynamic on a very deep level, and brings it to bear in "Shirley," her most ambitious film to date.

This highly-anticipated film is based on Susan Scarf Merrell's novel Shirley, which imagined the life of Shirley Jackson and her husband Stanley Hyman, as seen through the eyes of a fictional couple who come to live with them in North Bennington. With a screenplay adaptation by Sarah Gubbins, Decker has gathered a mighty cast, with Elizabeth Moss in the title role, and Michael Stuhlbarg as Hyman, Jackson's controlling, womanizing husband. Into this marital bell jar comes newlyweds Fred (Logan Lerman) and Rose (Odessa Young). Fred is Hyman's new teaching assistant at Bennington. Rose's desire to audit classes are dashed pretty quickly when Stanley asks her to help his wife with household chores. Rose can't really say no, and so she scrubs pots and pans, resentful of her husband's time spent among pretty co-eds, all while she gets sucked into the famous author's powerful orbit.

Jackson once said, “I wrote of neuroses and fear and I think all my books laid end to end would be one long documentation of anxiety.” In some of her stories and novels, the horror is explicit. In others, the horror is harder to locate. It's not a surprise to learn Jackson was agoraphobic. Her characters often cringe from social contact, reading sinister motives into every sidelong glance. Jackson died in her sleep at the young age of 48, a lifetime of chronic smoking and ill-health had taken its toll. But she was very busy while she was here. She is perhaps best-known for her short story "The Lottery", which appeared in the New Yorker in 1948, and, in our current parlance, went viral. Never before had The New Yorker offices been so inundated by letters. People didn't realize the story was fiction. One disturbed reader asked, “Are you describing a current custom?” Jackson became a sensation. She also wrote six novels, including The Haunting of Hill House (1959), and We Have Always Lived in the Castle (1962), which I consider to be her masterpiece.

"Shirley" isn't a biopic. It's more a film about Jackson, told in the style of one of Jackson's Gothic short stories. Jackson often used doubles and doppelgängers in her work, and there are a couple at play in "Shirley". Shirley is alternately cruel and kind to Rose, keeping Rose perpetually on edge. Jackson is working on a new novel (1951's Hangsaman), based on the real-life disappearance of a local girl (Paula Jean Welden, whose disappearance remains unsolved). In Shirley's imagination, Paula is a girl in a red coat walking through the woods, her face a blur. At some point, the face becomes Rose's face. Paula materialize in the waking world, infiltrating Rose's imagination as well as Shirley's. There's a triangulating dissolution of boundaries going on, and Paula's disappearance beckons both women: What really happened? Was she killed? Did she commit suicide? Or did she just decide to cut all ties and vanish?

Moss, a dead ringer for Jackson, with messy mane of hair, thick glasses, frumpy wardrobe, is so mercurial it's impossible to predict what she will do at any given moment. She's often formidable, ferocious, frightening. With all her depression and drunkenness, Jackson is nobody's fool, and Moss never lets us forget the will of iron inside this often-incapacitated woman, the woman who could look so unflinchingly at human nature that she could write something like The Lottery. Stuhlbarg oozes smarmy intellectual superiority, and yet there are shadings in the characterization which suggest that all is not what it seems. This is not the story of a caddish oaf and his poor neglected wifey. Moss and Stuhlberg, sharing long intense glares across the table as Fred and Rose chit-chat, seem, at times, like two trolls under a bridge, lying in wait for the next travelers, cackling in glee at the havoc they will wreak. It's George and Martha on steroids. Rose's transformation is the most radical in the film and Young is more than up to the task. It's a testament to her talent that in her scenes with Moss she seems equally as unpredictable.

Decker's visual style is as distinct as a fingerprint. She destabilizes images, focusing in on parts of it, rarely looking at things head on. The experience is sometimes like listening to music underwater, or trying to adjust the muscles in your eyes to read the fine print. Her films are often disorienting visually, with pin-points of focus gleaming out of blurred surroundings. Decker may be most well-known for 2018's "Madeline's Madeline," but her first two films—"Butter on the Latch" (2013) and "Thou Wast Mild and Lovely" (2014)—were what turned me onto her work. Her films thus far are challenging, experimental, bold. Decker is carving out a very interesting space for independent eccentric filmmaking. She also knows how to pull together a powerful team. Cinematographer Sturla Brandth Grøvlen does beautiful work. And Tamar-kali's score, along with the scores she's composed for "Mudbound" and "The Assistant," announce her as a major player in the almost lost art of old-fashioned (in the best sense) film scores.

A baffling decision was made at some point to present Shirley and Stanley as childless. In reality, the couple had four children, and Jackson wrote two humorous books about raising kids, with the Jackson-ian titles, Life Among the Savages and Raising Demons. She also wrote a book of tips for new moms. Her parenting books were successful precursors to books like Jean Kerr's Please Don't Eat the Daisies or, later, Nora Ephron's personal essays. Jackson was a true pioneer in this "space," especially since her books came out in the happy-homemaker 1950s, presenting a refreshing alternative. Granting the fictionalized aspects of "Shirley," excising the four children strikes me as not playing fair with the facts, especially since a huge part of Jackson's "brand" was as "author of humorous parenting books." If you didn't know these facts, I suppose it wouldn't be an issue, but it was an issue for me.

Caveat aside, Decker is a director worthy of Jackson. She works from the bottom up. She knows that when a woman says "Don't rub it! Dab!" what she really means is: "No wonder your husband fools around on you. Look at you. You're disgusting.”

Available on Virtual Theatrical and Hulu on 6/5. 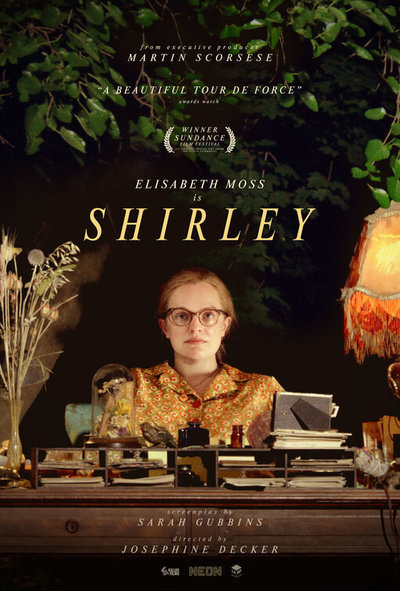