“Mudbound” is all about perception. How it can foster empathy and engender contempt, sometimes in the same person. How it can cause one man to look at his land with life-affirming pride and another man to see that same plot as the kiss of death. How an act of wartime courage involving a red-tailed plane and a dark-skinned pilot can forever alter one’s opinion of a different race. And how a society can impose unfair, harmful and absurd restrictions on an entire group simply because those people are seen as inferior by the powers that be. The film invites us to observe its characters, to hear their inner voices, to see what they see and to challenge our own preconceived notions about race and gender.

This is a period piece that evokes the grand family epics of old Hollywood, most specifically George Stevens’ 1956 film “Giant.” Like George Stevens’ Oscar winner, “Mudbound” is based on a novel and concerns itself with two families living uneasily on the same land. Director Dee Rees masterfully executes her character study, filling the frame with visuals as big and powerful as the emotions she draws from her superb cast. This is melodrama of the highest order, which is a compliment, for melodrama is not a bad thing. It is part of some of the greatest works of art, and in the right hands, it can elicit an ennui-shattering response from the audience.

We will follow two families, the Jacksons, who are Black, and the McAllans, who are White. The McAllan patriarch, Henry (Jason Clarke) is forced to interact with the Jacksons after he is suckered into a deal to buy land that the seller does not legally own. Henry’s embarrassment is amplified by the taunting rants of his racist father Pappy (Jonathan Banks) and the notion that he has to move into an area designated for a lower class of Whites than he believes himself to be. Henry is constantly reminded of his downgraded stature by the repeated appearances of Vera Atwood (Lucy Faust), a struggling, poor White woman whom he deludes himself into thinking is below his station. Vera is Henry’s ghost of Christmas Future, a reminder that he is one mistake away from her desperate existence. For these reasons, Henry despises the land where he resides.

By comparison, pastor Hap Jackson (Rob Morgan) looks at his little plot of land as a gift from God, a blessing that actually elevates his stature from that of his ancestors who couldn’t own land at all. It may be a harsh, at times unforgiving piece of Earth, but he has some form of ownership, no matter how tenuous. Even though Henry has commandeered it mostly for himself, leaving Hap to sharecrop it for diminishing returns, Hap still finds joy, solace and meaning in his farm work. As a Black man in post-WWII America, Hap has become accustomed to making due with even the smallest scraps of good fortune, no matter how infuriating they may seem. Hap is an experienced veteran of the war with Jim Crow; he has bent his anger into a strong, almost impenetrable suit of stoic armor whose weak spots are known only by his loving wife, Florence (Mary J. Blige).

Henry also has a wife, Laura (Carey Mulligan). Through her story, we first become aware that “Mudbound” presents its characters in parallel sets of two. (Rachel Morrison’s cinematography also works in this fashion—notice how each family’s house is lit.) Laura’s partner in this arrangement is Florence, another mother who, like Laura, has the socially accepted role of subservience to her man. Both Florence and Laura buck this trend by disobeying their husbands. They also share a moment of grief that bonds them as only two mothers can bond. As the elder of the two, Florence exhibits a maternal instinct toward Laura.

Laura also gets the first of the film’s internal monologues, moments of voiceover that Rees wrote with Virgil Williams in the adaptation of Hillary Jordan’s novel. Most of the characters have soliloquys that allow us a temporarily omniscient point of view. They provide invaluable information in a fashion that is at times achingly poetic yet completely natural. Florence’s words are especially powerful, rendered by Blige in an excellent performance that mixes the stoicism of Gloria Foster in “Nothing But a Man” with the mischievous twinkle that occasionally popped into a young Cicely Tyson's eye when her characters thought nobody was looking.

Florence and the rest of Hap’s family will be called upon several times to assist the McAllans. Henry’s demands are always delivered in a manner that on the surface sounds like a polite request, yet his tone of voice always stresses that saying no to a White man is not an option. Clarke delivers these lines in squirm-inducing fashion, though the level of discomfort depends on your perception—you may not feel it at all. And though it would appear that Henry has some regard for his counterpart, it becomes clear that he views Hap as too inferior to earn any empathy. Still, “Mudbound” doesn’t treat him as a standard-issue villain; his inner monologues and his interactions with Laura give him a complexity that allows us to understand his actions.

Part of that understanding comes from observing Pappy, a drunk who raised his sons to capitalize on the best White supremacy and privilege have to offer. Pappy has no internal monologues because he’s all surface. His inner voice would sound as racist, corrupt and disgusting as the things everyone hears him say out loud. Banks makes him more than just a one-note character; he’s genuinely menacing and scary enough to dissuade Henry from any sort of racial growth. Henry is bound to his father by guilt, taking him in even when Laura would rather have him burn in Hell, but Henry’s brother Jamie (Garrett Hedlund) manages to escape long enough to have an unexpected change of heart as far as Black people are concerned. Unfortunately for Jamie, his escape was World War II.

Florence’s son, Ronsel (Jason Mitchell) also served in World War II, battling the Germans and becoming the lover of a German woman he met overseas. He returns to a country that not only refuses to thank him for his service, but also expects him to return to second-class citizenry once he’s back on U.S. soil. The fact that Ronsel is treated better in the enemy country than his own is not lost on us. It will be underlined twice in the film’s bittersweet ending. Ronsel’s scenes with the White townsfolk upon his return are an unsubtle reminder that the America we’re seeing in this film is the one that certain voters want to bring back into existence.

Jamie and Ronsel bond over their shared war experiences, though initially, Ronsel is skeptical and worried about Jamie’s intentions. Jamie tells him that a Tuskegee Airman saved his ass in a dogfight, and that changed his perspective on race. Their friendship is anchored by war stories and booze, of which Jamie drinks too much to drown out symptoms of his PTSD. Nobody understands this the way Ronsel does, but their relationship immediately casts a sense of dread over the film. This progressive partnership is a dangerous one, because Jamie’s a loose cannon and Ronsel is unwilling to go back to racist rules now that he’s had a taste of freedom. So when “Mudbound” becomes terrifyingly violent, we have been prepped for it. Rees handles this, and the subsequent vengeance that follows, with amazing restraint, keeping it from becoming exploitative without diminishing any of its shock value.

Though “Mudbound” presents most of its story and its characters in parallels of two, Ronsel is the one character who shares traits with other characters. Like Florence, he has both a charitable and a stubborn streak, which is evidenced in a wonderful scene where he buys her a bar of chocolate. When Florence intends to break it into pieces and give it to her other kids, Ronsel demands that she keep the entire thing for herself. Have a taste of your own freedom, just as I had for myself in the service, he seems to say to her. It’s a well-played small moment in a movie filled with them.

While the entire cast is superb, “Mudbound” belongs to Blige, Mitchell and Hedlund. Hedlund’s roguish performance is a loose, sexy throwback to Errol Flynn and James Dean—he would have been right at home in front of George Stevens’ camera or underscored by Erich Wolfgang Korngold. Blige is a revelation. And Mitchell deservingly earns the film’s last internal monologue, a quiet, bittersweet and moving meditation on choosing love over hate that proves that Ronsel is the film’s true hero.

I don’t know what Roger would have thought of “Mudbound." But I do know that it supports his thesis that movies are machines that generate empathy. I believe that viewers of different races will find different entry points into the film, but everyone will come out at the end with their viewpoints challenged and perhaps enriched. Rees and company have crafted an unforgettable plea for empathy and justice. This is not an easy film, but it’s an essential one. 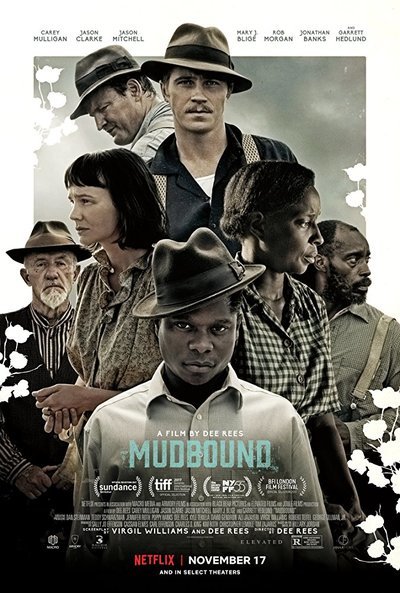