The debate over authorship—who get to tell whose stories—has heated up over the past few years. Until recently, white, straight men told the majority of stories and went unchallenged. Finally, we’re seeing the return of authorship to the people represented in such stories. Lived experiences of those in underrepresented groups are valued as expertise, giving the work a level of authenticity it would have never achieved in someone else’s hands. Look at the behind-the-scenes fight to keep the lead character Asian-American for “Crazy Rich Asians,” or the uproar that caused Scarlett Johansson to step down from portraying the role of a trans man. The struggle for our own authorial voice continues.

It’s on this stage that Josephine Decker’s “Madeline’s Madeline” makes her debut. Its main character, Madeline (Helena Howard), is a mentally ill, biracial teenager doing what teenagers do: fight constantly with their authority figures, discover what they’re passionate about and figure out who they are. Only, in Madeline’s case, she resorts to acting out against her overprotective, sometimes judgmental mother, Regina (Miranda July). It occasionally veers into violence, either fantasized or realized.

Madeline finds support in in her acting class, especially in the eyes of her doting coach, Evangeline (Molly Parker). However, as practices wear on, there’s a growing sense in the acting troupe that their leader is preoccupied with impending motherhood and hasn’t figured out the direction of their new work. Her eyes then shift to using her youngest pupil, Madeline, as a muse, slowly cannibalizing her lived experiences of a troubled relationship with her mom and history of mental illness for the coach’s production. The young girl is uncertain with what to do.

Does acknowledging these women have no right to tell Madeline’s story absolve Decker from doing the same thing in her own heavy-handed way? I’m not convinced, even as the movie annoyingly reminds us multiple times that’s it’s a metaphor. The film’s first image is a hazy image of a black nurse, reassuring Madeline that she’s not a cat. “What you’re experiencing is a metaphor.”

"Madeline's Madeline" wants to discuss race but not blatantly. So, it half-heartedly brings the subject up in scenes like when Evangeline brings an inmate to talk with her students about what it was like to feel trapped. It’s indirectly brought up when Madeline and her friends sneak into her family brownstone’s basement and finds mostly nudes of white women—presumably left by her dad. They joke that her mother has “jungle fever,” but Madeline doesn’t respond. Both Madeline’s mom and coach are (or were) in love with black men, yet there’s rarely a black man onscreen for long. Evangeline doesn’t mention her husband until Madeline meets him at a party, and there are no photos or mentions of Madeline’s dad. If this movie wants to confront those issues of authorship, why stereotypically erase black men in the process?

Sticky racial politics aside, there are a few inspired moments in “Madeline’s Madeline,” and most of them belong to the fiercely talented Helena Howard. She throws herself emotionally into the film, yet is so in command of her powers, she can stop mid-sob and look serenely calm. In one scene, she crawls to the ocean in a turtle costume for a Michel Gondry-esque fantasy sequence, and in another, thrashes at her mother with frightening physicality. It would be an impressive piece of acting from any adult, but from a 17-year-old, her performance qualifies her to be deemed a prodigy.

The film tries to give the audience an impression of what it’s like to be in Madeline’s head, the volatility, the mood swings and the disorienting slides from home to theater practice. Ashley Connor’s cinematography goes a long way into making the uncomfortable moments seem lyrical, its conflict a poetic struggle for control reflected in the variations of darkness and light. When Madeline fantasizes about hurting her mom, the scene is over lit and hazy, almost dreamlike despite its horror. There are moments where masks go over the camera, dizzying the viewer with limited perspective. Lights and days blur with alarming frequency and occasionally the audio drops out, leaving Charlie Brown’s teacher-like din thumping in the background. The colors pop in almost every scene, punctuating Madeline’s reality and absorbing her fantasies under an unnatural glow.

There are at least four times when the word “metaphor” is used in the film, but instead of illuminating this issue of authorship, the film wrests it away with melodrama and violence. There’s a streak of meanness that never sat well with me either time I watched this movie.

The violent means with which Madeline reasserts control is uncomfortable to watch, almost justifying these white women’s fears. “Madeline’s Madeline” lacks the self-reflection needed to answer its own questions about authorship—its story doesn't quite belong to its protagonist. 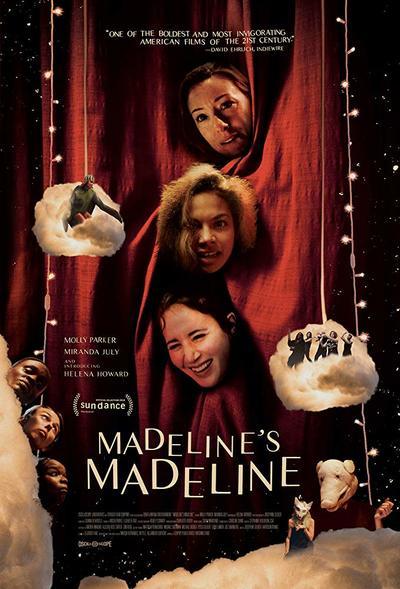