“Like most people today, Judy was a cynic and was offended by the slightest hint of fantasy.” So reads a portion of the opening text of the new movie directed and co-written (with his now former wife, Louise Stratten) by Peter Bogdanovich. This clunky observation, I think, misreads the modern or post-modern condition rather grievously. Cynicism today is in fact fed by fantasy, or at least delusion; it’s a mask that affects to connote a reckoning with The Real, which in fact merely enables its wearers to distract themselves from the true horror of the world as it is today. But anyway.

Judy, played by Illeana Douglas, is a Hollywood reporter, interviewing newly minted star Isabella Patterson, or “Izzy” who, as played by the nonetheless appealing Imogen Poots, speaks with a thick approximation of a Brooklyn accent that’s meant to evoke Judy Holliday in “Born Yesterday” or “Bells Are Ringing” but doesn’t even get within swinging distance of Madonna in “Who’s That Girl.” Accents aren’t even the main problem with “She’s Funny,” in which Bogdanovich tries to merge the multiple-New-York-storylined romantic comedy antics of his underappreciated 1981 masterpiece (yes, it is) “They All Laughed” with the backstage-at-the-theatre-full-of-lunatics antics of “Noises Off.” The movie sure is good-hearted enough. It’s a labor of love, it would seem, for all involved. Several younger-filmmaker admirers of Bogdanovich—the one-time tyro behind “The Last Picture Show” and other outstanding films of the “Easy Riders, Raging Bulls” era—teamed up here to produce the long-gestating picture. Noah Baumbach, Wes Anderson and George Drakoulias are all credited as executive producers. Their clout, plus Bogdanovich’s reputation, and the goodwill he’s garnered over years of working as an actor, no doubt helped pull together a wonderful cast, including Owen Wilson, Kathryn Hahn, Rhys Ifans, Will Forte, Jennifer Aniston, Austin Pendleton, and a lifeboat’s worth of recognizable cameo players.

On paper, the premise of the movie is not untenable. Owen Wilson plays theater director Arnold, in New York after working on a Hollywood picture, about to embark on a new stage project starring superstar pal Seth (Ifans), Arnold’s own wife Delta (Hahn), and a supporting player in the role of a hooker to be named later. Speaking of hookers, Arnold’s got a weird habit: he likes to solicit call girls, take them to a nice dinner, boink the bejesus out of them (“You are the most…attentive kinda lover,” Izzy says to Arnold after their sole amorous pairing) and then gift them with $30,000, telling them to give up The Life and go pursue their dreams. He couches this pitch around a speech featuring the catchphrase “Squirrels to the nuts,” which had at one point been the title of the movie. One marvels at a world in which even the most successful of contemporary theater directors could repeatedly depart with 30 large with such indiscrimination.

And that’s part of the problem with this movie. Despite its preponderance of mullets among its younger players, “They All Laughed” was at least a little conversant enough with the then-realities of New York City life; as such, it could present a recognizable world. The level of “fantasy” to which this movie actively aspires is so idealistic as to be laughable, but not in an entirely good way. Old-movie lover Izzy at one point says to Judy, about a playwright who falls in love with her, “He was exactly what I imagined a playwright to be, and he was the Arthur Miller to my Marilyn.” No, no, a thousand times no. Too many times the characters in this movie sprint across the line separating quirky charm from know-somethingish affectation, and then stay on the wrong side of it.

And this erodes the sunny farcical tone to which “She’s Funny That Way” aspires. It’s as if somewhere along the way this wannabe champagne got spiked with eager-to-please bennies. There are some good, funny bits, one involving a cab driver’s vivid protest against having to sit through a feuding couple’s disagreement. Aniston’s reluctant therapist character, weirdly shrill at first, actually gets funnier over the course of the movie, while Wilson underplays nicely throughout. He could have been the picture’s anchor, but the frenetic machinations of the plot spin it away from him. Then there’s the finale, in which the viewer ignorant of old movies gets a vivid primer in Lubitsch from a real-life filmmaker and film buff. It’s kind of cute and kind of…weird, which would be fine, only it doesn’t know how weird it is. Given the narrow range of this movie’s overall achievement, I imagine its preaching here will only reach the already converted. 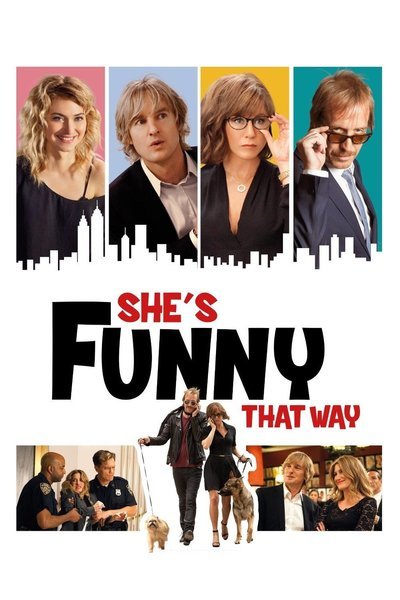 Rated R for some language including sexual references

Will Forte as Josh