Your gut tells you that the hero of "Shattered" is about to get into trouble when he goes to a supermarket after midnight and the only other customer is a gorgeous young woman, dripping wet from rain, who asks his advice on which wine to buy, accepts his offer of a lift home when her rideshare fails to materialize, and ends up having sex with him. This is a psychosexual thriller, a type of film in which naked bodies are a prelude to a body count.

Indeed, like the high-tech security devices supposedly protecting the hero's palatial mountain home, this film from director Luis Prieto ("Kidnap") and writer David Loughery ("Money Train," "Lakeview Terrace") is a machine that promises to fulfill certain functions. Unfortunately, the craftsmanship is lacking. That's not a knock against the look or sound of the movie, which is appropriately glossy, or the sex, which is pretty boisterous for a film made in the neo-Puritan early 21st century, or the violence, which is more  spectacularly gruesome than non-horror films tend to allow. (One character looms before their prey bathed in blood like Carrie after the prom.)

But there's no getting around the fact that several of the lead performances are stiff to the point of amateurishness (at least until the plot gets cooking about halfway through, and everyone gets to suffer, sweat, bleed and scream). And the script manages to be too much and not enough, gesturing clumsily in the direction of what the critic Anne Billson calls the Preposterous Thriller, while at the same time shoehorning in bits of social critique about the haves and have-nots that make "Shattered" come off as the movie "Parasite" could have been, were it possible to repeatedly drop a film on its head.

"Shattered" is a twist-driven film. But the twists don't follow real-world logic. Nor do they embrace the dream-world anti-logic of great psychosexual thrillers like "Fatal Attraction," "Body Double," "Basic Instinct" or the late-in-the-game classic "Gone Girl," the kinds of pictures where absurdities and outrages pile up to the point where the audience starts giggling with unhinged delight. Suffice to say if you're still interested in seeing ”Shattered,” you should check out of this review now.

The man, Chris Decker (Cameron Monaghan of the American "Shameless") is a tech entrepreneur who recently sold his company for millions. He has a wife (Sasha Luss) and daughter (Ridley Bateman) from whom he's about to be separated by divorce. He lives in the aforementioned dream house, which looks down on the plebes in town like the home of the tycoon in Akira Kurosawa's far more politically cogent "High and Low." The young woman, who calls her herself Sky (Lilly Krug), lives in a residential motel run by an affable dirtbag named Ronald (John Malkovich, who gives one of the film's only two memorable performances) and has a self-destructive roommate (Ash Santos’ Lisa) whom she supposedly goes home with Chris to escape.

What ensues is a story that seesaws between exuberant nonsense and a sort of half-assed sociopolitical awareness, mixing resentment of amoral techno-fascist douchebros, fascination with their show-off houses, and a slightly pervy obsession with model-actress-whatever types who might not, factually speaking, be teetering on the edge of the age of legal consent, but are nevertheless made up and costumed to evoke a barely pubescent anime waif, or Lolita. Krug and Monaghan, I'm sorry to say, are terrible in this, though it's hard to blame them entirely or even partially, given the lumpiness of the script and the director's seeming incapability of steering into the skid and producing a glorious wreck of a movie, the kind audiences cheer lustily even though they know it's dumb.

A lot of the issues come back to the question of whether you're watching the kind of film that cares about believable psychology or one that could not care less. It handles the distress of Sky's roommate more sensitively than one might expect, but it also has the hero getting his leg broken with a tire iron during an attempted car break-in and then gives us zero indication of how that shocking crime might've affected the victim's psyche (for the most part, he acts as if it was an inconvenience).

Soon we realize we'll never figure out who Sky "really is" because there's nothing in her head but greed and evil. Kudos to the movie, kind of, for taking one more giant step into raw sleaze by bringing in character actor Frank Grillo (the film's other memorable performance) to play a preening, wiseass, thug-mastermind type. Grillo's smirky delivery, New York tough guy swagger, and retro-'50s pompadour read as an invocation of Mickey Rourke, the crown prince of screen debauchery in the late '80s and early '90s, and the star of Michael Cimino's remake of the home invasion thriller "The Desperate Hours," which the final third of the film sometimes resembles (along with both versions of "Funny Games").

"Shattered" is, as you might've gathered, a film history-literate work that blatantly pays homage to earlier movies: the house recalls both the bad guy's mountain fortress in "North by Northwest" and the place that Craig Wasson house-sat in "Body Double," and not only does Chris spend most of the film in a wheelchair, a la “Rear Window,” the director does his own version of the dreamy wake-up kiss between Grace Kelly and James Stewart. But the tributes achieve little, save for reminding you of better movies.

The picture at the top of this review, John Malkovich standing in front of a woodpile making a goofy face, does not reflect the tone of “Shattered,” but he's more interesting than anything that's actually in the film, so we put it up there as a treat for the reader. Malkovich only has a few scenes, but in every one of them, he indulges in little verbal and physical flourishes (such as giving a cut flower an insinuating lick) that liven up a dreary experience. That it never occurred to anyone involved that the film would've been greatly improved by putting Malkovich's loser-outsider character at the center of the story rather than on its periphery is just one more example of the production's failure to capitalize on the resources at its disposal. 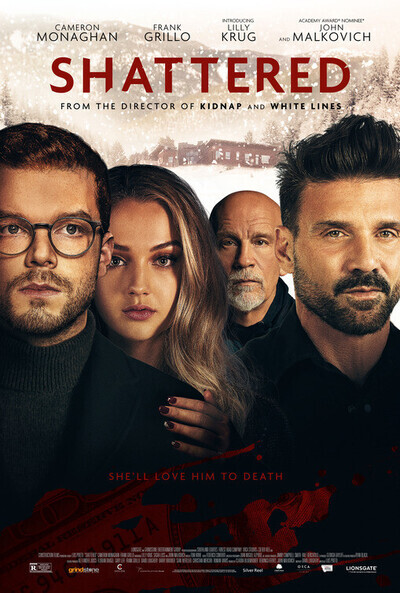