"Body Double" is an exhilarating exercise in pure filmmaking, a thriller in the Hitchcock tradition in which there's no particular point except that the hero is flawed, weak, and in terrible danger -- and we identify with him completely. The movie is so cleverly constructed, with the emphasis on visual storytelling rather than dialogue, that we are neither faster nor slower than the hero as he gradually figures out the scheme that has entrapped him. And the casting of a Hitchcockian average guy also helps.

The movie stars Craig Wasson, an open-faced actor with an engaging smile, as its hero, an unemployed actor named Jake. He isn't smart, he isn't dumb, he isn't perfect, he isn't bad. He is an ideal choice to set up as a witness to a murder. Jake needs a place to stay, and another actor (Gregg Henry) offers him a job house-sitting in a weird, modernistic home on stilts up in the hills above Los Angeles. The other actor also points out all the sights -- including a shapely neighbor who does a nightly striptease dance in front of her open window. Jake is only human. For two nights, he uses a telescope to watch the striptease. He also begins to suspect that the woman may be in danger. In sequences inspired by "Rear Window," he begins to follow the woman (Deborah Shelton), but he keeps his distance because he's caught in the same dilemma as James Stewart was in the Hitchcock picture: He is, after all, technically a Peeping Tom, and he wouldn't know the woman was in danger if he hadn't been breaking the law.

But the movie is not just an exercise in style. It is also a genuinely terrifying thriller, in which an almost clockwork plot brings the hero and the killer together without a single logical glitch. De Palma is at home in this genre. Although his "Scarface" was more of a serious social commentary, thrilling suspense movies are his specialty, and his credits include "Carrie," "Obsession," and "Dressed to Kill." With "Body Double," he has his most airtight plot. He also has, once again, his almost unique courage to go over the top -- to push scenes beyond the edge of common sense and into cheerfully heightened and impassioned overkill. The burial sequence next to the Hollywood reservoir, for example, or the photography in the tunnel during one of Jake's attacks of claustrophobia, are so uninhibited that they skirt the dangerous edge of being ridiculous. But because the story's so strong, they're not. They work. 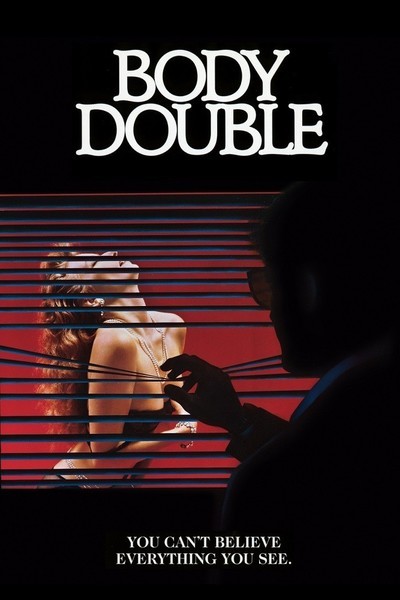