One look at her and you could swear that Sarah Jo, the wide-eyed protagonist of writer/director Lena Dunham’s inquisitory and gradually disarming “Sharp Stick,” is no older than 15. But despite her unadulterated smile, beauty of untainted innocence, and porcelain-doll clothes with plenty of bows, florals and appliques, she is a 26-year-old young woman trapped in a pre- “sexually active” phase.

Played by an extraordinary Kristine Froseth, who sensationally portrayed a very different kind of tortured young woman just last year in “Birds of Paradise,” Sarah Jo is stuck in this insecure childlike state mostly due to complicated health reasons, including a severe hysterectomy (a condition Dunham knows a thing or two about) that caused a pubescent menopause and left some scars, both the physical and emotional kind. Think of this intriguingly isolated being like Kirsten Dunst in “Interview with the Vampire,” but in reverse—instead of a mature soul buried in a child’s body, she is an adult whose unworldly spirit is in urgent need of sunshine and growth through new experiences, heartbreak, and yes ... sex.

It’s not that Sarah Jo hasn’t had any exposure to the notion of eroticism in her small slice of Los Angeles. Her single mother Marilyn (Jennifer Jason Leigh) has been around the block a few times, often telling her daughters advisory tales about men. With her sensual Instagram videos, her gorgeous and influencer-in-the-making sister Treina (Taylour Paige) also seems healthily versed in that department. In order to no longer struggle with her lack of experience (she is still a virgin), Sarah Jo comes onto her employer Josh abruptly one day (a terrific Jon Bernthal, playfully sleazy), a daring act no one sees coming; neither he, nor us. Yes, Sarah Jo’s shocking boldness catches the seemingly kind and decent Josh off guard when his very pregnant wife Heather (Dunham) is off to work and his babysitter Sarah Jo is not supposed to do anything but help out with their disabled son and some minor chores around the house. He turns down her confident invitation to sex at first. But mutual attraction gets the better of him soon enough (minutes, actually) and the two fall into an affair.

Dunham unearths a refreshing amount of humor, honesty, and sincerity through Sarah Jo’s misadventures with Josh between bedsheets, at once challenging her complex (though not entirely unwarranted) reputation of being a tone-deaf and privileged one-trick pony, with her second-only feature. (Yes, it’s hard to believe that the “Girls” creator has only made two movies thus far.) It of course helps that her heroine here organically earns that sincerity, being an infinitely curious yet initially clueless woman—so clueless in fact that she asks questions like, “Go down on me? Go down ... where?” and interprets the act of blowjob in the literal sense, like how one blows birthday candles after making a wish. Also on Dunham’s side is cinematographer Ashley Connor’s sensitive work, through a lens that sensitively blends eroticism and elegance, never forgetting that this is Sarah Jo’s journey; these are her terms.

It’s interesting to consider “Sharp Stick” in unison with Sophie Hyde’s “Good Luck To You, Leo Grande” (also released this year) in which Emma Thompson plays the retired school teacher Nancy who hires a sex worker to finally have good sex, and maybe even an orgasm; something so foreign to her despite her age. In a lot of ways, Nancy and Sarah Jo represent different responses to sex shaped by culture and generational variances: Nancy accepts bad sex as a less-than-ideal reality of her life and does nothing to change it until later in life. Whereas Sarah Jo decides she’d better do something about it before it’s too late. In that regard, it was refreshing for this critic to follow a fairytale-esque story about a twenty-something who’s trying to figure out what she likes, what her body responds to without an ounce of shame, entirely on her own terms.

“Sharp Stick” is less than perfect and a little incomplete. You can’t help but long for a bit more drama in it at times, as well as a little more tension and risk. With her sexual conquests, would Sarah Jo really be as safe out in the real world not constructed by Dunham? But perhaps even asking this question misses the point of “Sharp Stick,” which pokes at youthful curiosities and appetites with verve and gusto. 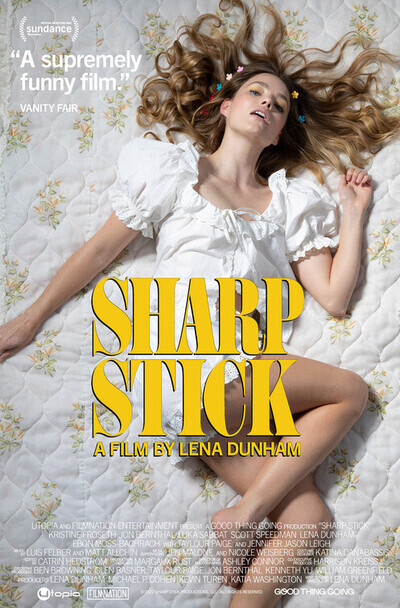 Rated R for strong sexual content, some nudity, language throughout and drug use.