There's really only one way to evaluate "Birds of Paradise," and that is this: Is it better, worse, or as good as "Center Stage"?

Every generation gets one key ballet movie. The all-time best non-documentary ballet movie is Robert Altman's 2003 "The Company," co-written by the movie's star, Neve Campbell. It is an intimate, subtle film with vivid insider details, based on her experiences as a ballet dancer. (An exquisite outdoor dance to "My Funny Valentine" in the pouring rain has a movie's worth of insight into the commitment of a ballet dance.) 1977's "The Turning Point" had great performances by Shirley MacLaine and Anne Bancroft as aging ballerinas confronting the roads not taken. That one featured sensational dancing by real-life ballet stars, including a stunning "Le Corsaire" by Mikhail Baryshnikov. But in 2000, "Center Stage" imprinted on its fans less for the dancing than for the (sorry, fans) soapy storylines about the competition between young dancers to see who will be a prima ballerina, with issues of parental pressure, perfectionist premier maîtres de ballet, eating disorders, injury, and the very rigid, even impossible standards of traditional dance companies versus experiments with more contemporary music and steps. "Birds of Paradise" is along those lines, as it tells of two American teenage girls in France, competing with others to be the one dancer selected to join the company of the Opéra national de Paris.

Stories about teenagers are automatic emotion intensifiers; add ballet and the stakes are ramped even higher. There's no stage of life and no field that's more high-pressure, and classical ballet is based on near-impossible standards of perfection, without a foot or a hair out of place (see "Black Swan"). That elevates some of the drama about body image, for example. It's not just internal; ballet is a world where every body is judged down to the smallest (or not-small-enough) detail. The competition between the two young women in this film is amplified further. They are both equally committed to being the one dancer selected to join the company but in every other way they are different.

Diana Silvers, who made a strong impression in "Booksmart" and "Ma," plays Kate Sanders, a student who is on scholarship, low on money, and is the only child of a loving single father willing to do whatever it takes to support her dream. She is willing to do whatever it takes for him as well as for herself. While most of the girls have been studying ballet since they could walk, she has only been dancing for five years. Before that, she was an athlete, which gives her dance performances a lot of strength but perhaps not as much technique as the others. She does not speak French and she does not smoke. She does play by the rules the way someone who is always just one mistake from losing her place must.

Her toughest competitor is Martine Durand (Kristine Froseth), the daughter of wealthy, powerful, and demanding parents, still deeply grieving the death of Ollie, her brother and dance partner. "Your father is the American Ambassador to France?" Kate asks. "No, my mother is the American ambassador to France." Martine's parents are furious for several reasons and one is their daughter's competition being there only because of the scholarship they set up in Ollie's name. She speaks French, she smokes, and she breaks the rules the way people with privilege use it to be insulated from consequences.

Kate and Martine literally start out punching each other, and insulting each other. Then, during a nightclub dance-off, they begin to develop some grudging respect, a close friendship, then more. They promise to give each other nothing but friendship and support, thinking they can both win. It is not that easy.

With all the drama and the inevitable blood on the toe-shoes, eating disorders, and romantic complications, there's not enough time for actual ballet dancing. Director Sarah Adina Smith has a gift for striking images and creating intriguingly spooky moods, bordering on gothic, but the plot is so overstuffed we hardly have time to even notice Jacqueline Bisset as the demanding director of the ballet group.

So, the answer is, there's a lot to like but it's not as good as "Center Stage." Or in dance terms, it is not quite en pointe. 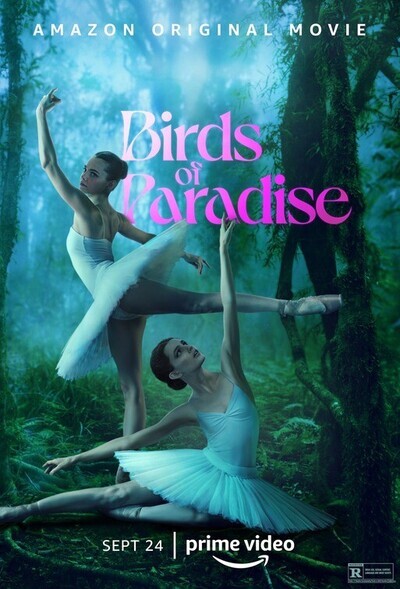