Back in the summer of 2013, the Syfy Channel debuted a little thing called “Sharknado,” a deliberately campy goof in which a bizarre weather anomaly caused a tornado filled with killer sharks to bear down upon Los Angeles in an orgy of barely adequate special effects while gnawing on a variety of vaguely familiar second-tier celebrities struggling mightily to keep straight faces. The end result was not “good” in any conventional sense of the term, but the combination of a certain goofball spirit and that undeniable grabber of a title came along at the point during the dog days of the season when people were desperately in search of some kind of weirdo diversion (it should be noted that at this point and time, the world as a whole had not yet turned into one giant metaphorical sharknado). It became a moderate cult sensation amongst people who had grown tired of the likes of “The Room” and were looking for a new cinematic oddity to goof on. Each summer since, Syfy has seen fit to offer up a new “Sharknado” film in which the settings (ranging from New York to Las Vegas to outer space) and the faces making cameo appearances may change, but the basic premise has remained resolutely the same: scenes of C-grade actors getting chomped to bits by D-grade CGI sharks mixed together with enough jokey references to other, generally better movies to allow film buffs to distract themselves during the 200 or so dull parts by seeing who can come up with the longest list of titles getting shout-outs.

Now comes “Sharknado 5: Global Swarming,” and anyone charged with reviewing it has to come to grips with a couple of unavoidable obstacles before even attempting such a thing. For starters—and this is a problem that has plagued anyone who has ever grappled with one of these films over the years—how does one go about analyzing a film that deliberately goes out of its way to be as silly and inconsequential as it possible can? And for those who have found themselves in the seriously bizarre circumstance of having to cover more than one of them over the years, as is the case of yours truly, how does one manage the task without being reduced to rehashing the same observations and snarky comments that have already been used in dealing with those earlier episodes? I cannot honestly say that I know the answers to either of these questions but between posing them and offering a brief history of the entire “Sharknado” phenomenon, for lack of a better word, I have already managed to eat up a decent chunk of my word count without actually getting around to dealing with the film at hand. Believe me, if I could figure out a way of doing that for the entire review, we would all be much better off.

Since the “Sharknado” films are all pretty much the same—increasingly bizarre shark-based storm systems begin wreaking imperfectly rendered catastrophe and the heroic Fin Shepard (Ian Ziering), his increasingly robotic (literally) wife April (Tara Reid) struggle against the odds to save the day and some shreds of their dignity—the screenplays are now more like Mad Libs than anything else. This time around, the people include Olivia Newton-John, Chris Kattan, most of the people from the later hours of the “Today Show,” Brett Michaels, Fabio, Margaret Cho, Fabio, Tony Hawk and no doubt others that I somehow overlooked—to avoid spoilers, I will not cite the circumstances surrounding their appearances except to note that when the Queen of England turns up at one point, she is played by Charo and that turns out to be only the second-most-questionable casting decision on display.

The places include London, Australia, Stonehenge, Egypt, Brazil, Kansas and Japan. (Actually, with the exception of a few London locales, the whole thing was pretty much shot entirely in Bulgaria, a revelation that will surprise no one based on the visual evidence provided here.) The things on display involve hieroglyphics suggesting that sharknados are not a recent phenomenon, a blimp, a mysterious talisman with the power to control sharknados, an especially fierce sharknado that sucks up Fin and April’s young son and keeps him spinning around throughout, an all-female squad of sharknado busters known as the Sharknado Sisters, references to movies as varied as “An American Werewolf in London,” “Raiders of the Lost Ark,”  “Mad Max: Fury Road” and “Grease,” and a climax in which Japan is threatened with an attack by what is inevitably described as a “sharkzilla.” The whole thing ends on an uncharacteristically bleak note that only gets bleaker with the announcement that “Sharknado 6” is on the way.

I like to think that I have been reasonably tolerant towards the “Sharknado” films in the past by accepting them as the goofs that they are but with “Sharknado 5: Global Swarming,” the series has officially crossed the line from cheerfully nonsensical to vaguely irritating. Unless you are the type of person who loves to hear the exact same joke told in the exact same way five different times or are a Tara Reid completist (and to be fair, she gets the single best line of dialogue when she remarks “Now you want logic?”), there is no earthly reason to sit through any of it. As for my stated goal of trying to think of something new to say about the film, I fear I have failed miserably. Of course, as I mentioned, there is apparently a “Sharknado 6” coming soon—quite possibly with at least one former member of the Trump administration turning up in the supporting cast—and when it comes around, presumably about this time next year, I will do my best to try to come up with something new and/or entertaining to say about it. Hopefully, so will the filmmakers. 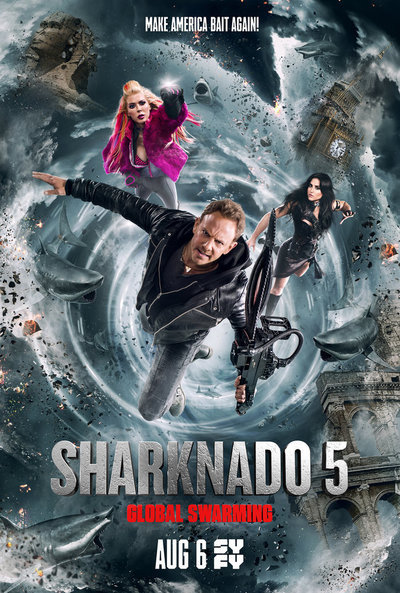 Charo as Queen of England

Fabio as The Pope

Kathie Lee Gifford as Herself

Hoda Kotb as Herself

Al Roker as Himself