Set in the upper echelons of New York business, but focusing on a couple of overworked, stressed-out assistants, "Set it Up" is a rare romantic comedy that has its own distinctive look, rhythm, and storytelling voice. It builds its sensibility on deep knowledge of the romantic comedy, from "The Apartment" and "It Happened One Night” to "The Parent Trap" and "Cyrano de Bergerac" (mentioned by the two main characters, who trick their bosses into falling in love so they can have a moment's peace). It's satisfying, for the most part—a solid romantic comedy with sharp dialogue, amusing characters, a soundtrack of well-worn feel-good hits, and a few surprises up its sleeve. Its only major flaw is an inability to imagine the bosses as richly as the leads. But we'll get to that.

Harper (Zoey Deutch) is an assistant to Kirsten (Lucy Liu), a famous and fearsome ESPN reporter. Harper wants to be a writer but can't muster the nerve to follow through on her one good idea; on top of that, her days are so long than whenever she does try to write, she's so tired that "everything I write is, like, bad." Charlie (Glen Powell) is an assistant to Rick (Taye Diggs), a Tom Wolfe Master-of-the-Universe type whose job never quite comes into focus but definitely involves huge sums of money.

The bosses' employers are located in the same building, which allows Charlie and Harper to meet cute in the lobby one late night. Harper orders food for her boss without realizing the restaurant is cash-only. Charlie, who just missed the cutoff to order his boss' favorite steak, spots an opportunity to redeem himself, pays for the order, and claims the whole thing; this leads to a charming negotiation that splits up the food, and ultimately to a shared realization that if they can trick their Type A bosses into falling in love, they might get their lives back. "It's hard to bark orders at someone when your tongue is down someone's throat," Harper says.

Harper just signed up for Tinder and is going out on lots of dates, and Charlie is devoted to a gorgeous but materialistic girlfriend (Joan Smalls) who doesn't appreciate him. But the two spend so much time together plotting their bosses' romance that they become close friends, and there are moments where they click so well that you can sense them laboring to deny the obvious. Director Claire Scanlon and screenwriter Katie Silberman are able to imagine these two as both credible human beings and classic romantic comedy types (Charlie is young Jack Lemmon poured into a tall preppy frame, while Deutch can remind you of either Ellen Page or Diane Keaton, depending on the scene and how fast she's talking).

The leads bring such strong comic chops and have such chemistry that there's a chance we might have been smitten even if Silberman hadn't provided them with wannabe-iconic scenes to play, including one that originates in the conviction that pizza is the most romantic food. Their shared sense of humor is built on deadpan delivery and insulting remarks that are really secret statements of camaraderie. Charlie and Harper fall into a mutually satisfying relationship so fast that you start to imagine the old married couple they could become, if only the stars would align.

The ensuing plot complications enrich the movie, even as they suggest fresher roads that the film rarely musters the nerve to explore. One of these is the physically and emotionally draining aspects of capitalism. "Set it Up" is as much a film about work as it is a romantic comedy. People on the lower rungs of the film's economic ladder often seem exasperated by their mistreatment by customers and clients, while people on the higher rungs are obsessed with money and status and are often unknowingly condescending towards people below them (notice how how Charlie's conversations keep circling back to getting promoted, and how Harper keeps finding herself without money to pay low-wage workers who probably earn only slightly less than she does). The script seems forever on the verge of combining all these details into a grand statement, probably a satirical one. But it never happens, and you're left wondering if the movie softened its own edges so as not to scare anyone off.

The film's vision of a diverse city is more tantalizing and frustrating. It's a treat to see Liu and Diggs cast in the kinds of abrasive, magnetic parts that have traditionally gone to white character actors (think of Fred MacMurray in "The Apartment" or Meryl Streep in "The Devil Wears Prada"). Both carry themselves with crowd-pleasing swagger. They're aided by Silberman's recurring gags, such as Kirsten barking "Tell me something I don't know!" at her writers, and Rick coveting outward signifiers of wealth (he throws out any liquor that costs less than $200) and making sudden, demanding requests of Charlie. Liu and Diggs look like they're having a blast, and the payoff of Kirsten and Rick's relationship is the most unexpected note in the movie.

But aside from a scene of Rick reverting to a less polished persona while drunkenly bonding with Charlie, and a humanizing moment where we realize that Kirsten recognizes great potential in Harper and genuinely thinks of her as her pupil, the characters never give the actors as much as the actors give the characters. And we never gain a sense of what it means for these two to be in charge of—and yet isolated within—a predominantly white workplace. They armor themselves with flamboyant aggression, and convince their employees (and themselves) that they prefer brooding isolation to human contact. This is the sort of behavior a 1990s movie yuppie character might exhibit. But it plays differently on characters who are African-American and Chinese-American, and therefore had to fight their way into a corporate workplace that welcomed most white people of a certain social class. (We probably shouldn't even get into the alternate universe version of "Set it Up" where Kirsten and Rick are the leads and Harper and Charlie are supporting.)

Rick + Kirsten wouldn't feel like such a missed opportunity if "Set it Up" weren't so evidently comfortable writing supporting characters of different races and ethnicities; giving every actor with a speaking role something memorable to do, even if they're onscreen for less than a minute; and filling each role with a performer who sticks in your mind. (Meredith Tucker, who has cast many vivid ensembles, does wizardly work here.) You expect "Unbreakable Kimmy Schmidt" costar Tituss Burgess to excel playing a creepily over-invested building employee who gets drawn into Charlie and Harper's scheme; but lesser known players register just as strongly, in particular Jeff Hiller as a mistreated waiter, Evan Park as a doorman with a spiritually exhausted glare, and Sonia Denis as a ring salesperson who sees a relationship-changing argument unfold in front of her.

They all reminded me of one the biggest small parts in any film, Nada Despotovich as the bakery employee in "Moonstruck" who witnesses' Nicolas Cage's meltdown and blurts out, "That is the most tormented man that I have ever known. I'm in love with that man. But he doesn't know that. I never told him, because he can never love anybody since he lost his hand and his girl."

There's so much life in this movie that I wanted it have even more. But it's still bursting with talent. 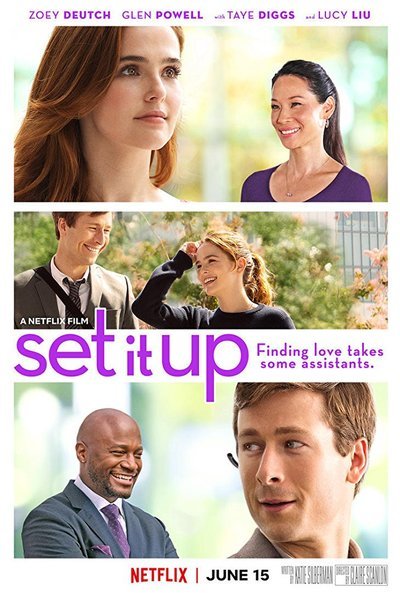