“Secret Headquarters” is as bland and forgettable as its title would suggest. It’s so generic, it almost sounds like the name of a better movie translated awkwardly from another language into its simplest terms in English.

Yes, the sci-fi comedy does indeed contain a secret headquarters, where much of the uninspired action takes place. But the production design and visual effects are so chintzy, they make the “Spy Kids” movies look high-tech by comparison. So woefully underwhelming is this endeavor, you’d never know that “Secret Headquarters” is a Jerry Bruckheimer production. It almost makes you long for the nutrient-free splendor of his typical spectacle. That’s how dull this is.

Directors Henry Joost and Ariel Schulman, who made their name in 2010 with the documentary “Catfish,” have nothing nearly so ambitious or groundbreaking in mind this time. Co-writing the script with Josh Koenigsberg—which itself is based on a screenplay by frequent Marvel scribe Christopher Yost (“Thor: Ragnarok”)—Joost and Schulman offer wacky adolescent hijinks, frantic scurrying, and a ton of insipid dialogue. Michael Peña, as the lead bad guy chasing after our young heroes, literally says to the kids: “Playtime’s over, kids.” There's also a “Don’t taze me, bro” joke for those of you who enjoy being on the cutting edge of pop culture. And my bored 12-year-old son, who is very much the target audience for “Secret Headquarters,” insists that no one his age actually says #YOLO or describes things they like as “tight.”

Since this is such an ‘80s throwback, perhaps adjectives like awesome or rad would have been more appropriate. If only they were applicable here. Joost and Schulman are definitely going for the wonder and thrills of an Amblin production, with songs from INXS (“Never Tear Us Apart”) and Talking Heads (“Burning Down the House”) comprising the soundtrack. But the heart is what’s missing, as well as a legitimate sense of danger.

The likable Walker Scobell, who played the younger version of Ryan Reynolds earlier this year in Netflix’s “The Adam Project,” stars as 14-year-old Charlie Kincaid. You’d be forgiven for thinking Owen Wilson was the star of “Secret Headquarters,” given his prominent placement in the movie’s promotional materials, but he’s actually a supporting figure as Charlie’s frequently absent father, Jack. Charlie thinks his dad is always busy traveling for his boring job as an IT expert; what he doesn’t realize is that Jack is secretly a superhero known as The Guard. A flashback at the film’s start to a decade earlier reveals the moment during a family camping trip when a spaceship crashed in the woods, and a glowing orb popped out and chose Jack for this assignment. Now he and Charlie's mom, Lily (Jessie Mueller), are divorced. And on a weekend when Jack is supposed to be enjoying some father-son bonding with Charlie, he instead takes off to save the world again.

When Charlie invites his best friend, Berger (Keith L. Williams, so charming in “Good Boys”), over to his dad’s stylish cabin, they accidentally stumble upon an elevator that sends them plummeting to Jack’s hidden, underground lair. Also along for the adventure are the girls they have crushes on: the worldly and mature Maya (Momona Tamada), and the incessantly perky influencer Lizzie (Abby James Witherspoon, Reese’s niece). Her non-stop chatter gets annoying, but Lizzie does have the best line in the whole movie.

Once Charlie comes to grips with his father’s true identity, he allows himself to get caught up in the fun of playing with all of Jack’s gadgets and weapons, from magnetic wands to jetpacks. There are a lot of them, so this takes a LONG time. But there should be a transporting sense of discovery in these moments; instead, they’re repetitive and cheap looking. The one clever idea involves a portable portal, but mostly, it’s a lot of inadvertent zapping. There’s also no real sense of how this space is laid out—it's just one corridor and cavern after another, all of it blanketed in a sickly, grayish-green palette.

But while the kids are messing around, they have no idea that tech baddie Ansel Argon (Peña) is tracking them with the help of the military captain (Jesse Williams) who was there the day the spaceship crashed. They’re after the McGuffiny orb that serves as Jack’s power source, which is actually called ... The Source. While the rest of Argon’s thugs are bumbling softies, Williams is surprisingly effective as an understated villain.

Jack’s return to save the day provides yet another reminder of how unoriginal “Secret Headquarters” is. He’s basically Iron Man, with a flying suit that functions in many of the same ways as Tony Stark’s, complete with a data display on the inside of his helmet. Wilson and Peña trading quips with each other is good for maybe one or two laughs, but neither actor gets to show off the full extent of their comic chops. They may have another chance, though, because the ending of “Secret Headquarters”—complete with the obligatory goofy closing credits—suggests misguided aspirations for a franchise. 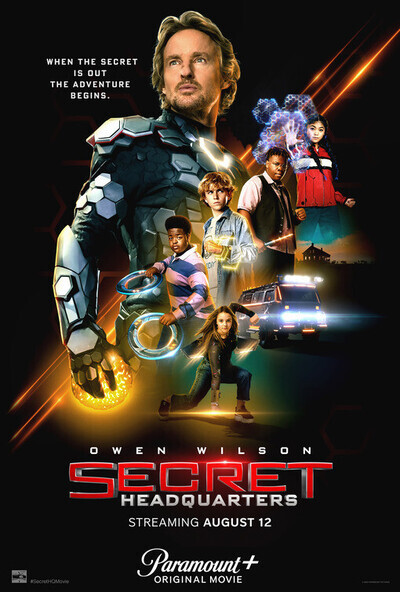 Rated PG for violence, action, language and some humor.