The good boys of “Good Boys” try very, very hard to be bad. But despite their adult aspirations over the course of a wild couple of days, it’s their sweet-natured innocence that ultimately sees them through every misadventure.

That’s the inherent conflict—and the chief source of humor—in director Gene Stupnitsky’s extremely R-rated feature debut. The trio of sixth graders at the film’s center are shockingly profane and adorably clueless at once. They know just enough to be dangerous, but they’re also smart enough to find their way out of real danger—over and over again. And while the premise eventually grows thin and the jokes turn repetitive by the third act, the chemistry between the movie’s three stars is both lively and substantial enough to keep the antics enjoyable.

The script from Stupnitsky and his writing partner, Lee Eisenberg—whose previous collaborations include “Year One,” “Bad Teacher” and several episodes of “The Office”—captures with squirm-inducing accuracy the heightened sense of drama that exists in middle school, where every social interaction carries major stakes. It’s a time in your life that sucks no matter who or where you are—you’re not a kid anymore and you’re not yet a teenager, but you are a jumble of confusing hormones. Stupnitsky and Eisenberg have created a trio of distinct characters to navigate this minefield, and the actors playing them bring them refreshingly to life.

The preternaturally gifted Jacob Tremblay plays the group’s de factor leader, the hopeless romantic Max. Brady Noon is Thor, a would-be tough guy with a love of hair products and musical theater. And scene-stealer Keith L. Williams plays Lucas, the biggest and tallest of the three but also the most guileless. With his open, angelic face, deadpan delivery and keen sense of physical comedy, Williams is the most delightful of them all and he needs to be cast in everything starting right now.

The convoluted plot finds these slightly nerdy kids ditching class and scrambling all over town to replace Max’s dad’s drone, which they broke while trying to spy on some teenagers down the street (Molly Gordon and Midori Francis). If they don’t replace it by the time Max’s father (Will Forte, among the many comedians in the supporting cast) gets home from a work trip, Max will be grounded. That means he won’t be able to attend the cool kids’ kissing party, where he’d hoped to have his first kiss with the sweet, shy girl he has a crush on, Brixlee (Millie Davis). (One nice touch: Even the so-called popular kids put on a grown-up act, with their leader, the diminutive Soren [Izaac Wang], hilariously spouting street-wise aphorisms like, “You feel me, dog?” and “I ride or die for my squad, too.”)

These are kids who drop F-bombs left and right, but they also giggle as they ride their bikes through the sprinklers. And for a while, Stupnitsky finds a charming balance between who they really are and who they’re pretending to be. But pretty soon, it becomes clear that this is a one-joke movie—Oh my god, these cute 12-year-olds are swearing!—and once that one joke has run its course, it feels like a struggle just to reach the 90-minute mark.

But “Good Boys” aims to be about more than just graphic dialogue and gross-out humor. It also depicts the bittersweet moment when you realize you’re growing apart from the childhood playmates with whom you’d promised to be friends for life. Max, Thor and Lucas refer to themselves with great solemnity as the Beanbag Boys, and they try to fight off the nagging sensation that perhaps their interests are changing and they don’t have as much in common as they once did. It’s the same kind of emotionally truthful premise that drove the misfits-on-a-rampage high school comedy “Superbad,” which “Good Boys” resembles in myriad ways, including the presence of Seth Rogen and Evan Goldberg as producers.

There’s an honest heart beneath the racy laughs. If only sixth-graders themselves could actually see it. 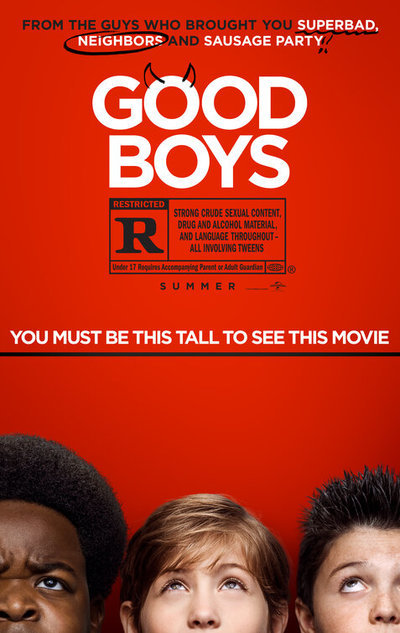 Will Forte as Max's dad