"Scrooge: A Christmas Carol" is as if someone made a bet that one of the most enduringly beloved works of literature—adapted with great success innumerable times featuring everyone from Mickey Mouse to the Muppets to Mister Magoo to classically trained British actors to Jim Carrey, to Ryan Reynolds and Will Ferrell just a couple of weeks ago—could be remade so poorly that it was close to unwatchable.

The animated characters are so stiff and generic they look like the ones in the starter set that comes with the software to create animation on your laptop. The animators paid too much attention to the visual effects of Scrooge’s passage to the various places the ghosts take him and not enough to the way the main characters move, the expressions on their faces, or the weight of their bodies. The songs by Leslie Bricusse, who also co-wrote the screenplay, range from forgettable to downright painful, with Scrooge (Luke Evans) belting out a power ballad that sounds like a Bon Jovi reject.

I share with my friend and colleague Matt Fagerholm a devoted affection for Charles Dickens’ 1843 novel A Christmas Carol and most of its many adaptations. I listen to the Tim Curry audiobook every year, and always watch my favorite movie versions, including Alistair Sim, MGM, and Mister Magoo (with excellent songs by the “Funny Girl” team Jule Styne and Bob Merrill). I’m also very fond of “The Man Who Invented Christmas,” with Dan Stevens as Dickens himself, writing the book. I hope to get to the Morgan Library in New York City this month to glimpse the original manuscript. So I came to this movie at least 75 percent in favor. It had to work hard to beat me down to one star.

I presume no one needs a recap of the characters or plot. (If you do, start with the book or the Alistair Sim version.) Dickens’ A Christmas Carol characters are cultural icons, with Scrooge’s name now a synonym for any wealthy miser. It is fun to see his namesake Scrooge McDuck play Scrooge with Mickey Mouse as Bob Cratchit in the Disney version. Scrooge’s famous dismissal of Christmas with a “Bah! Humbug!” and Tiny Tim Cratchit’s “God bless us everyone” are both as much a part of Christmas lore as Rudolph and candy canes. It is the classic tale of redemption. A Christmas Carol endures because the change of heart is not through interaction with a religious figure but through Scrooge’s reckoning of his own past, his failure to see the people around him with understanding and compassion, and the consequences of his greed and cruelty.

And then there's Dickens’ gorgeous, incomparable language, which is casually jettisoned here. Making older material accessible is one thing, but this is just dumbing it down. Victorian characters should not sound like shoppers at the mall food court or, worse, like a poorly translated fortune cookie (“The past can hurt, especially yours, but it can also heal if you learn from it.” “Happiness is whatever you want it to be.”)

Some adaptations here are harmless, if not especially meaningful, like combining the characters of Scrooge’s one-time fiancée and the daughter of his kind-hearted employer or switching Scrooge’s childhood memory to one from Dickens’ own life. Unfortunately, other changes drive home the story’s points in an unnecessarily heavy-handed fashion, like underscoring the connection between the death of Scrooge’s sister and the illness of Tiny Tim.

But other changes are distractions with no purpose, like adding a group of street urchins and squeaking magical gerbil-like creatures and, ridiculously, Scrooge’s big pet dog, Prudence. The whole deal of the miser is his isolation. What's he doing with a dog, one for whom he feels some affection and receives some companionship? And what could be the point of substituting some random old guy for the intelligent and remarkable (if skeptical) boy in that first joyful conversation on Christmas morning?

The best that can be said of the top-notch voice talent is that it is blameless. Evans, Jessie Buckley as the fiancée, and Jonathan Pryce as Marley do their best. But even the supremely talented Evans and Buckley cannot save these songs, drastically lesser work from the composer or co-composer of “Pure Imagination,” “Goldfinger,” and Oscar-winner “Talk to the Animals.” Sample lyrics: “Happiness is a bright star; are we happy? Yes, we are.” “I like living the life and why not; ‘cause life’s a pleasure that I deny not.”

This is the second time Bricusse has created a musical version of Dickens’s novella. The first was a live-action film with Albert Finney as Scrooge. One of the most memorable songs from that film, “Thank You Very Much,” is uncomfortably reprised here, again as a celebration of Scrooge’s death. God will bless us, everyone, if the inevitable next “A Christmas Carol” is better than this one. 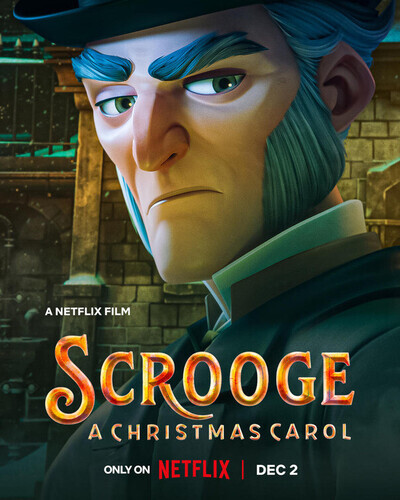 Olivia Colman as Ghost of Christmas Past (voice)

Writer (based on the novella: "A Christmas Carol" by)