A coming-of-age drama set in the forlorn world of absent parents and trailer parks, writer/director Megan Griffiths’ faintly sketched “Sadie” owes much of its limited appeal to its terrific lead performer, Sophia Mitri Schloss. A breakthrough as the emotionally detached teenager who spirals into disquieting complexity, Schloss reflects Sadie’s repressed young battles and dark leanings with chilling exactness. Griffiths (“The Off Hours,” “Eden”) unfortunately doesn’t give Schloss much more than an abstract tableau to work with: limited prospects, blue-collar people stuck in a vicious cycle of hardship and torn apart families are among the story’s prominent beats. The gloomy turns in her film accumulate to such an extreme outcome in the end that you inevitably start raising your eyebrows to the contrived narrative. In that, “Sadie” shares its protagonist’s most defining attribute—a frustratingly manipulative nature.

When we first meet Sadie, we get the distinct sense that we have met a teenager like her before in countless films. Now raised by her mom Rae (Melanie Lynskey, typically terrific in relaxing into her character’s skin), Sadie holds on to the vanishing memories of her soldier father, impatiently awaiting his return from years-long stationing in Afghanistan. Not unlike the teenagers of the recent “Flower” (directed by Max Winkler) or Wayne Wang’s two-decades-old “Anywhere But Here,” she seems to be convinced of her dad’s untouchable greatness and her mother’s falsehood. As a result, Sadie goes out of her way to sabotage Rae’s romantic prospects, the first of them being her high school’s well-meaning counselor whom Rae reluctantly dates. When Cyrus (John Gallagher Jr.), an ex-pilot with a slowly revealed addiction problem, arrives in their community of misfortune and builds a romantic bond with Rae, Sadie’s desperate attempts to tear down a future without her own father assume an even more distressing dimension.

In fairness, Griffiths tries something new with “Sadie”—the aforementioned familiarity of her story and characters slowly venture out to avenues around violence and perilous hostility not often explored in coming-of-age films; at least not in those driven by female leads. She builds a persuasive relationship between Sadie and her longtime best friend Francis (Keith L. Williams, another memorable performer), who often gets bullied at school and relies on Sadie as a safeguard. Rae and Francis’ mother Carla (Danielle Brooks) also embark on a worthwhile arc of camaraderie. Through these intriguing but underdeveloped plot threads, Griffiths lightly touches on female bonding and occasional enmity, and even tries (though, not entirely successfully) to engage with Sadie and Rae’s white privilege. “Sadie” hits its most enduring notes in small moments when Griffiths shows us her unassumingly observant side. Conversations between the precocious Sadie and Francis’ retired grandfather Deak (Tee Dennard) and one particularly inspired, humorous instance when Rae blurts out “I didn’t shave” to Cyrus at the worst possible time show us the perceptive filmmaker behind the material.

Ironically enough, these flourishes of life also distract from the film’s main focus. While Schloss comprehends Sadie’s buried rage (obliquely bringing to mind Andrea Arnold’s masterful “Fish Tank”), Griffiths’ script only tentatively engages with her dangerous obsession with violence, caused by a fixation on her father’s wartime mission. Sure, the increasingly angry, boundary-pushing Sadie gets herself in trouble at school with a provocative essay that causes unease amongst her teachers. But the film abandons the troubling questions around her motivations. Similarly, Griffiths alarms the audience with Sadie’s methods to bring Cyrus down, but doesn’t quite flesh out her impulses or bother to build her character beyond rough brushstrokes. “Sadie” doesn’t exactly drown in feel-bad misery porn, but despite a uniformly committed cast, it never quite comes together as the layered portrait of the troubled teenager it promises to deliver, either. 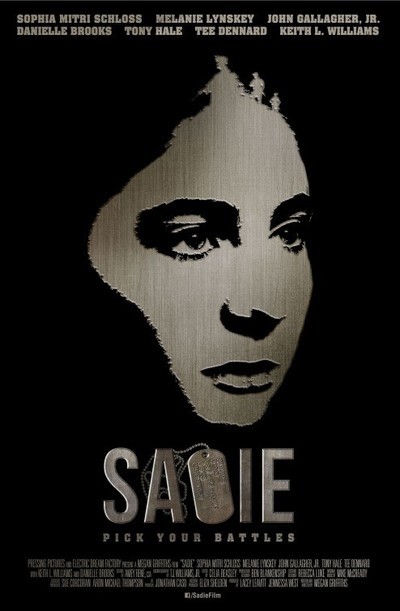