Juno plus Lolita equals "Flower," an indie drama about Erica (Zoey Deutch), a spunky-profane, sexually active, criminally ambitious 17-year old from the San Fernando Valley. Directed and co-written by Max Winkler (son of actor Henry Winkler), the movie is a Frankenstein quilt of not-quite-there-ness. Almost nothing convinces—not the story, not the script's view of human nature, not the dialogue, not even Erica, a young woman who's at the center of every scene, and is presented as a force of nature who's as beguiling and funny as she is relentless, even though, very often, she's none of those things. The cast's heroic exertions fail to save "Flower" from its own worst tendencies.

"Flower" starts with Erica performing oral sex on a local police officer as part of an ongoing blackmail scheme that keeps her and her two best pals, Kala (Dylan Gelula) and Claudine (Maya Eshet), in shopping money while adding to a fund to bail Erica's absentee dad out of jail. Erica's mother Laurie (Kathryn Hahn) is dating a nice single dad named Bob (Tim Heidecker). Bob's teenage son, an overweight and painfully shy recovering drug addict named Luke (Joey Morgan), leaves rehab and moves in, prompting Erica to try to get to know him Erica-style, by making a lot of knowing wisecracks and then offering oral sex to chill him out. "I like sucking dick, it wouldn't be a burden," she assures him.

She does this sort of thing a lot. "Flower" expends quite a bit of screen time on Erica's nonchalance about oral sex, playing it either for laughs (she keeps a sketchbook of all the penises she's serviced) or pathos, always keeping things cute or sweet, never delving deep enough into Erica's psyche to show how damaged a teenager must be to live that kind of life. The film is queasily fascinated by her sexuality, and sometimes veers perilously close to getting off on it (as in a sequence where Erica dances to loosen up Luke, at one point clinging to a pole like a stripper). This is a different proposition from exploring a teenager's sexuality, as many superior independent films, not all of them directed by women, have done before.

From there, "Flower" turns into a teenage bonding story, with an unstable, ultimately grotesque undertone of voyeuristic fascination. Luke declines Erica's offer of a therapeutic hummer, telling her that he's been a barely-functioning person since childhood, when he was molested by a man who happens to frequent the bowling alley where Erica and her friends hang out. His name is Will Jordan (Adam Scott), but Erica calls him Hot Old Guy. Another blackmail scheme is hatched, driven not just by greed but a desire for payback—and in one of the film's only intriguing twists, it's Erica who wants vengeance, on her possible future stepbrother's behalf. Whether this is a perverse attempt at bonding or the result of Erica projecting her submerged anger against her absentee father and various johns is left ambiguous—a rare example of restraint in a movie that otherwise never misses an opportunity to explain its characters to us.

Luke says no to Erica's plan at first, but she keeps hammering away at him. "Shaking down a child molester is our moral obligation," she insists. "If we don't act now, then other little boys might get butt-raped like little Lukey over here, and then 15 years from now they'll be popping pills and eating their feelings, too." Reaching for a pop culture comparison, she asks Luke, "What would Batman and Robin do if they saw the Joker sticking his finger up little boys' assholes?" Despite all the disgust she beams in Will's general direction, she's clearly infatuated with him, to the point where her crusade on Luke's behalf starts to seem like a pretext to add one more drawing to her sketchbook.

The heroine is the movie's least convincing character, and that's a serious problem. Where every other individual in "Flower" seems like a person who could exist, at least in theory—and the exquisitely observed details of working-class life do much to sell the film's world to us—Erica remains an abstraction, the sum total of her quirks, from that penis sketchbook to her pet rat Titty Boy, who eats Hot Cheetos and watches "Sixteen and Pregnant" with her and sometimes sits inside a carrying case resting on her stomach while Erica suns herself on a swimming pool's diving board like Ben Braddock in "The Graduate." She's a bundle of attitudes and tics who never comes into focus as an actual teenage girl, however stylized or emblematic or larger-than-life she was intended to be.

In the end, Erica exemplifies a female character type that critic Nathan Rabin dubbed the "Manic Pixie Dream Girl," who "exists solely in the fevered imaginations of sensitive writer-directors to teach broodingly soulful young men to embrace life and its infinite mysteries and adventures." The character can be seen in 1930s screwball comedies like "Bringing Up Baby," in such post-millennial films as "Garden State" and "Eternal Sunshine of the Spotless Mind," and in Jonathan Demme's 1986 road film "Something Wild," about a repressed Yuppie bore who loosens up after a free spirit lures him into a wild, sexy, dangerous adventure. ("Flower" fesses up to its "Something Wild" fixation by eventually having Luke and Erica don wigs the same color as Melanie Griffith and Jeff Daniels' hair in Demme's movie.)

At its best, this kind of character can become the engine driving a film, even if she only makes sense as half of a couple. At its worst, the Manic Pixie Dream Girl is a phony life force: an intellectual screenwriter's dirty-wacky fantasy. This film puts the Manic Pixie Dream Girl character at the heart of the story for its first two-thirds, only to dis-empower and marginalize her, reducing her to a prize to be claimed by the anguished, ruddy-faced Luke, who starts out emasculated and introverted but becomes bolder and more decisive as the storyline darkens and grows violent. "Flower" turns out to be a stealth male rescue fantasy. The damsel-in-distress thinks she's the hero of the story, but she's mainly the catalyst for a troubled young man's catharsis, just like every other film in this genre.

"Flower" is cloying, simplistic, clueless, and indifferent to most of the suffering that it chronicles. It only comes alive in a handful of dramatic showpiece moments that are likely the reason the actors signed on to do the movie (Scott and Hahn win Best in Show), but these are unfortunately hamstrung by intrusive underscoring that seems meant to take the sting out of a movie that needs all the sting can get. Deutch overplays Erica as a wisecracking femme tomboy, telegraphing every "outrageous" line and cheeky reaction, pushing her right up to the edge of caricature in a borderline-Nicolas-Cage-like way, as if trying to force the movie to become the bad-taste comedy-drama that it probably needed to be in order to succeed. It's a bold play that doesn't work, but it's more compelling than anything the script or direction can offer.

The ending is oblivious to the human cost of the wild schemes perpetrated by Erica, Luke and the others. This would be wickedly delightful if the film were a satire on disturbed, selfish people, but it shows no signs of having that sort of self-awareness. Mostly it's incompetent. To say that the final scene is as chilling as anything in "Badlands" or "Natural Born Killers" would be high praise if "Flower" seemed even the slightest bit aware of how sociopathic it seems at that moment. If you could pour the worst tendencies of American independent cinema over the last twenty years into a gigantic soup tureen and let it simmer overnight, this film would be the unappetizing result. 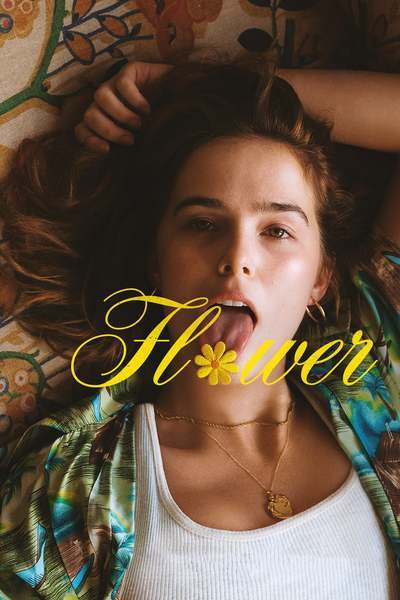 Adam Scott as Will