You’ll be able to figure out where “Run” is headed pretty quickly, but that doesn’t detract from the precise thrills and campy fun along the way.

This is the follow-up from the guys who made 2018’s “Searching,” a taut, clever thriller starring John Cho as a frantic dad looking for his missing daughter, which took place (almost) entirely within the confines of laptop and cell phone screens. It was a gimmick, but a brilliantly executed one, and it offered Cho the opportunity to give a tour-de-force performance in a situation where there’s nowhere to hide.

With just their second feature, director Aneesh Chaganty and his co-writer, Sev Ohanian, expand the scenery but maintain the same tight narrative focus. And even as things get a little nutty by the end in a way that deviates from the quiet, slow burn that came before, the performances in what is essentially a two-hander always remain gripping. We’ve seen Sarah Paulson do this sort of simmering-beneath-the-surface insanity for years, but it’s always chilling to watch. Her technique is so specific, and she keeps you on edge with just the slightest facial expression or unexpected line delivery. But the great discovery of “Run” is Kiera Allen, making her feature film debut. As if performing opposite one of the greats working today weren’t daunting enough, “Run” asks a ton of Allen in a physically and emotionally arduous role, and she’s up for every challenge. She’s a real find and a joy to watch.

“Run” begins, though, in a quietly harrowing way. With echoes of the Ryan Murphy series “Ratched,” we see Paulson’s Diane Sherman at a hospital where everything is bathed in a sickly green light. She’s just given birth to a tiny baby who arrived prematurely, and a title card lists a variety of illnesses including arrhythmia, asthma and diabetes. Seventeen years later, we see Diane living an extremely organized but seemingly happy life with her daughter, Chloe (Allen), who runs through her daily routine from her wheelchair. (Casting a disabled actress for this part also makes Allen an excellent choice.) This includes medications and physical therapy but also hours of homeschool, which Diane administers. Mom also cooks healthy meals with the vegetables she grows in her own garden. Everything is carefully controlled. Chloe is clearly an intelligent young woman, as evidenced by the many complex engineering projects she works on in her bedroom, and she would seem to have a bright future ahead of her.

Yeah, that’s the thing. Chloe has dreams of leaving home and her isolated town—and her mom—to study at the University of Washington, four hours away. It’s not that they have a dysfunctional relationship. It’s just that it’s only been the two of them in that remote house for so long, and since Chloe hasn’t been allowed an iPhone or internet access all these years—which is more than a tad suspicious—she’s understandably yearning to explore the outside world. The way Diane insists a little too defensively that she’s totally fine with this possibility during a support group meeting suggests that perhaps she’s … not.

So much of what makes the clockwork of “Run” tick comes from the tiny details and the editing, the work of Nick Johnson and Will Merrick. Following their usual schedule and noticing slight tweaks along the way gives us the creeping sense that there’s a disturbing shift underfoot. Part of the fun of “Run” is that, as in “Searching,” we’re solving the mystery of what's truly happening right alongside the main character. A prime example of this approach occurs at the pharmacy when Diane and Chloe head into town to see a movie (and the title on the marquee is good for a chuckle). We’re putting the pieces together at the same time Chloe is, and we can feel her panic as the tension steadily escalates. Later, in one of the film's more physically demanding scenes, Chloe must MacGyver her way out of a tricky situation, but the fact that Chaganty and Ohanian have laid the groundwork for her smarts and resourcefulness makes it a blast to watch, and not at all ridiculous. So many of Allen’s scenes require her to act alone and pull us along wordlessly, which would be difficult even for a seasoned actor, but there’s a wisdom and a confident stillness about her that’s compelling and grounding.

And that’s crucial, because “Run” gets a little wild as it barrels toward its conclusion—less Hitchcock, more “Misery.” But there are some unexpected twists and turns within the big reveal as to what’s actually going on here. And during these bizarre times when we’re all stuck at home ourselves, “Run” may just be the escape we needed all along. 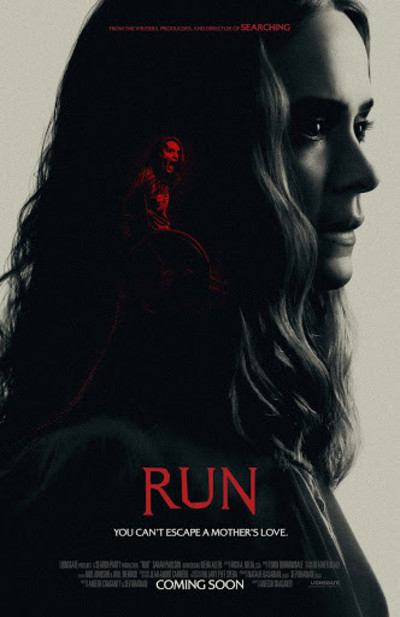 Rated PG-13 for disturbing thematic content, some violence/terror and language.