We’ve seen this gimmick before: the high-wire act of setting a movie entirely within the confines of electronic devices, allowing us to feel as if we’re logging in, clicking and typing along with the characters in real time. The 2015 horror flick “Unfriended,” for example, pulled off this feat in lively, detailed and eventually grisly ways; before that, the 2014 Elijah Wood thriller “Open Windows” tried this trick with less success.

Structuring a film this way is impressive as an ambitious screenwriting exercise, if nothing else. It also gives filmmakers the opportunity to embrace technology while simultaneously making a point about the way it transfixes us and turns us into zombies. The sensation allows us to identify with these characters as they make the same kinds of decisions we would and multitask with a variety of windows and websites open at the same time. We are them and they are us and everyone needs to put down the phone or close up the laptop and go for a walk in the outside world—or at least set our devices to airplane mode and turn the ringer off, if only for a little while.

With “Searching,” director Aneesh Chaganty and his co-writer, Sev Ohanian adhere to their central conceit in ways that are consistently clever, yet ultimately wander a bit astray. But what sets their film apart from others of its ilk is its dramatic underpinning. “Searching”—a title that has double meaning—follows a panicked father’s online moves as he tries to track down his missing teenage daughter. It aims for and earns genuine emotion rather than cheap thrills.

The ever-versatile John Cho shows great range and takes us on an intimate, gripping journey as David Kim, a widower raising his 16-year-old daughter, Margot (Michelle La, in her first major role), in suburban San Jose, Calif. In sort of a high-tech version of the devastating, wordless opening of “Up,” we see David and his wife Pamela (Sara Sohn) raising Margot over the years through a series of photos, videos and calendar entries. (In a nice touch, fonts and graphics change as technology evolves and improves.) “Searching” smoothly and efficiently depicts the passage of time, including Pamela's cancer battle. The film handles the tragedy of her passing with quiet poignancy.

In the present day, David and Margot live busy lives between work and school, and they mostly communicate through text messages and FaceTime calls. But one night, the usually conscientious Margot fails to come home after a study group session, something David doesn’t realize until well into the next day. And here’s where the intricacies of the technology have such an impact: We can see all those unanswered text messages from him just sitting there, ominously, lined up in a long, green column. We can see the time stamp of the last phone call Margot made to him in the middle of the night. We can feel David’s fear growing because ours is, too.

“Searching” takes a series of twists and turns from here as David contacts police and a full-blown effort begins to find Margot. There’s a lot you’re going to want to experience on your own, so I hesitate to describe too much more. But over and over again, Chaganty and Ohanian find innovative avenues into the laptop setting they’ve established, from David working backward to determine Margot’s locked social media passwords to the spreadsheet he creates to interrogate her friends about her whereabouts. Through it all, he remains methodical, but his rising anxiety is inescapable. Cho spends a lot of time in medium shot or close-up in a split screen with whatever he’s working on, so there’s nowhere for him to hide. We see everything his character is feeling, as he’s feeling it. It’s a startling experience, as if we’re spying on him at his most vulnerable.

The arrival of a determined Debra Messing as the police detective investigating Margot’s disappearance changes the film’s energy, providing a ray of hope. (David naturally looks up her character, Det. Rosemary Vick, on Google and Facebook the first time she calls him, seeking traces of trustworthiness.) But the more they uncover together, from Margot’s secret Tumblr posts to the last place her car was seen, the more David realizes he didn’t really know his only child. It’s the sad paradox of technology, a tool that’s meant to bring people closer together, that it also can foster such a divide. Not the most novel concept, perhaps, but one that “Searching” explores in smart, slickly paced ways.

But as the film pulses toward its conclusion, it introduces images and information that deviate from the premise that we’re seeing everything from David’s perspective. A narrative omniscience occurs that fills in some holes, but it also results in a loss of tautness and focus. (I do appreciate that the filmmakers got the geography of the Bay Area correct, though, as well as the mic flags of the local TV stations breathlessly covering every development of the search effort.) ‘Til the end, though, we’re deeply invested in these well-drawn characters, and whether they’ll find their happy ending both online and IRL. 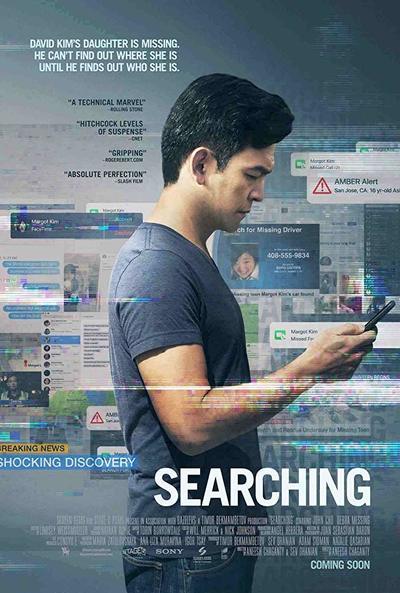 Rated PG-13 for thematic content, some drug and sexual references, and for language.