There’s a fantastic special feature on the new “Inside Llewyn Davis” Criterion Blu-ray in which filmmaker Guillermo Del Toro interviews Joel and Ethan Coen entitled “The First Hundred Feet, The Last Hundred Feet.” In it, Del Toro uses “Blood Simple” (the first hundred) and “Inside Llewyn Davis” (the last hundred) to examine the entire career of the Coen brothers. At Sundance this year, one could have had the same conversation with Kelly Reichardt, as Oscilloscope premiered a restored version of her 1994 debut “River of Grass” alongside the premiere of her star-studded 2016 film “Certain Women.” The latter is a film that still haunts me weeks after returning from Park City and a movie I think we’ll be talking about a lot this year, but it’s the former that comes out this week, returning to theaters for a limited run. It’s fascinating to watch “River of Grass” in light of what Reichardt would become in films like “Old Joy,” “Wendy & Lucy,” “Night Moves” and “Meek’s Cutoff.” She is easily one of our most important filmmakers, and it’s interesting to see her start to play with themes in "River" she would later return to, even if the execution isn’t quite there yet.

Reichardt’s films all feature, either blatantly or subtextually, a natural world that is going on regardless of what humans do on top of it. She is a master of using natural space, whether it’s the neverending horizons constrained by her aspect ratio in “Meek’s” or the darkness of night in “Night Moves,” and one can see her starting to play with this idea in “River of Grass.” The characters in Reichardt’s debut are inconsequential against the backdrop of a much larger world. They exaggerate their own importance—as we all do to a certain degree—and Reichardt’s film ends so abruptly, featuring a shot of freeway gridlock heading off into the distance. Almost all of her films seem to suggest that life existed long before you met these people and will go on long after their drama has unfolded. We are but a speck in a universe that cares little about us.

Cozy (Lisa Bowman) is a bored housewife in the Florida Everglades, where every day looks like the day before and life seems to have no purpose. She’s looking for anything to spark her dull life when she meets the gregarious Lee (Larry Fessenden) in a bar. They flirt and drink. Lee suggests they break into a friend’s house so they can swim in his pool. Lee shows Cozy a gun that he found by the side of the road that is actually related to a crime Cozy’s father is investigating. The owner of the home comes out to see what’s going on and the gun goes off, convincing Lee & Cozy that they killed a man. Now, they’re on the run, displaced from their already-barely-placed life like Carl Hiassen’s version of Bonnie & Clyde. They hang out in motels, seemingly unable to really be on the run, stuck in the Everglades like so many people who talk about leaving but never do.

The kind of meandering apathy that Reichardt is going for in “River of Grass” can be tough to connect to as a viewer, and it’s interesting that her films became more resonant when they switched from what is kind of a comedy to drama. How do we deal with our insignificance? Cozy and Lee don't really deal with anything. We barely care about Cozy and Lee because it feels like Reichardt barely cares about Cozy and Lee. There are enough times when Reichardt’s wit and skill comes through to make it worth a look in its restored version, especially if you’re a fan of her later work, but it’s almost too ethereal, it slips through your fingers when you try to grab it. Although that could be the point. 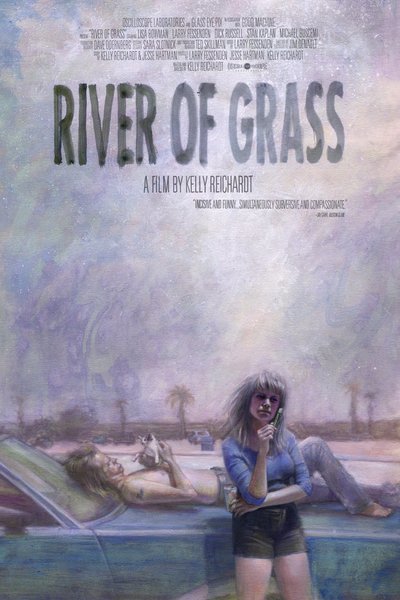