If "Raze" had been released in 1975, Quentin Tarantino would never shut up about it. He still might not shut up about it because it stars Zoe Bell, the New Zealand stuntwoman who doubled for Uma Thurman in the "Kill Bill" films and clung to the hood of Stuntman Mike's car in "Death Proof." Directed by Josh C. Waller from a screenplay by Robert Beaucage, this tale of captive women fighting to the death has the poker-faced craziness of a 1970s or early '80s midnight flick, the kind that made audiences howl for blood.

"Raze" starts with an obvious fake-out, making you think it's about another character when it's obviously about Sabrina, whose raging face adorns the film's poster. A young woman (Rachel Nichols) wakes up on the floor of the dungeon following a one-night stand with a hunky guy she picked up in a bar, wanders the prison halls and runs into Sabrina, who fights and kills her in a close-quarters confrontation filmed in Jason Bourne whiplash-cam.

Then it's on to the premise, the characters and their backstories. The prison is a family-run institution that's pitted women against each other for generations. The guards are male, the prisoners female. The current jailers are a creepy, ostentatiously moralistic married couple (Sherilyn Fenn and Doug Jones) who dote on each other when they aren't berating the prisoners for their sins. The inmates all have experience fighting, professionally or otherwise. Most studied martial arts for self-defense; the wiseass Phoebe, played like a sneering Lee Marvin villain by Rebecca Marshall, has been physically and sexually abused since childhood. The jailers compel the women by threatening their loved ones, images of whom are piped in via closed-circuit TV. These human insurance policies have no idea they're being monitored, much less marked for death.

The best genre movies create their own reality, then fill it with situations compelling enough that the viewer is rarely distracted by what Alfred Hitchcock called "refrigerator logic." How did the jailers successfully kidnap so many strong women? Why are the women conventionally beautiful enough to be catalog models? Do the jailers buy their sweatpants in bulk? You don't ask such questions of "Raze" because it's a dream logic movie comprised of bits and pieces of other dream logic movies: "Battle Royale," the Hunger Games series, "The Most Dangerous Game," a smidgen of "Fight Club," a dollop of "Oldboy." The characters are sketched with two or three details, then filled in by the actors' furiously physical performances. In place of a standard three-act structure, "Raze" is presented as a series of bouts joined by thin strands of dramatic connective tissue. Onscreen fight cards tell you who's up next.

Of course "Raze" begs to be read as allegory, perhaps for the way patriarchal society treats women as objects, entertainments, prisoners or slaves, pits them against one another for the prize of male approval, and pressures them to conform to limiting roles: girlfriend, wife, mother, tramp. Tantalizing fragments of meaning ricochet in the film's margins, but they never freeze long enough to let you look at them.

That's probably for the best. "Raze" is not an especially political or even introspective work, though it sometimes poses as one. If its direction and fight choreography were a more imaginative—if each showdown had a strikingly different look, or were built around a different concept, as in Tarantino's "Kill Bill" movies—it might have been a classic of sorts. Instead it's a solid feature with a few inspired moments. Its dark virtues are visceral and emotional: the amped-up sound effects of heels and knuckles bruising flesh and cracking bone; the intelligence in Sabrina's eyes as she plots against her jailers; the weirdly powerful confrontation between two combatants, one of whom tries to psych out her opponent by repeatedly asking her, "How's your mother?"

This is a women's prison picture, but not the kind you're thinking of. There are no rape scenes or shower scenes. Moments in which men intimidate or overpower women are about bulk and intensity, not sexual terrorism. "Raze" doesn't objectify its female fighters any more than the Olympics objectify their athletes. Its women are posed and shot like hounded Amazons, and the director gives every major character a spot-lit pirouette; the best finds Marshall taunting future adversaries in the cellblock hall, then stepping through an entryway and giving the finger—to the viewer, or so it seems—before the doors slide shut. The female characters are gladiators. Sabrina is Spartacus in a tank top.

Bell's performance is the best reason to see "Raze." She's just right as Sabrina, a strong-silent type in Steve McQueen-Clint Eastwood mode. The character mangles adversaries with her fists, feet, forehead and thumbs, but Bell's most fascinating moments are quiet ones where you watch her Hellenic face in close-up, thinking. How was this actress not cast as Wonder Woman? Can anything be done to remedy this injustice? 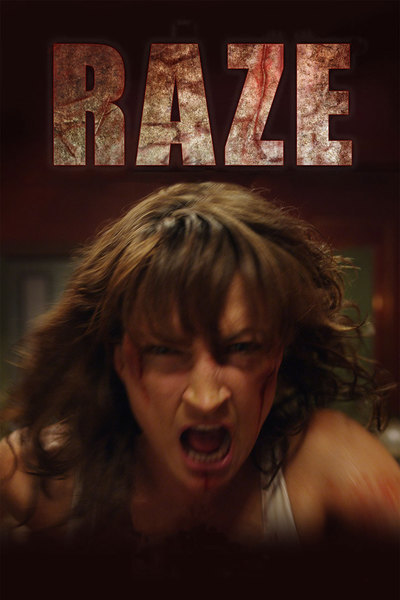