Screen Gems, the studio responsible for “Proud Mary” was nice enough to make their product almost impossible for me to see before my deadline. Genre films such as this often don’t have critics’ screenings, which is fine, but practically every film nowadays has night screenings. Manhattan has hundreds upon hundreds of movie screens, yet not one of them was playing “Proud Mary” on Thursday. I do not believe this had anything to do with quality; “The Snowman,” which is about 50 times worse than this film, not only gave us all the clues but it also gave us early screenings at every single theater that ran it on its opening Friday.

By contrast, Screen Gems was going to make me work for this review, sending me on an Odyssey to rival Homer’s epic poem. The hero of this remake—let’s call him Odieseus—eventually found his Ithaca after a two-hour commute to a Jamaica, Queens movie theater. And I’ll be honest: Professionalism had nothing to do with it; I just really wanted to see this damn movie. Since the superb trailer, which played like gangbusters every time I saw it at theaters, I have been feening for Taraji P. Henson’s take on John Cassavetes’ “Gloria.” “Proud Mary” is fronted by an Oscar-nominated actress whose last film, “Hidden Figures” made an ungodly amount of money at the box office. Yet Screen Gems was hiding the movie from critics as if it were a drunk frat boy trying to crash a classy black-tie soiree.

“Proud Mary” doesn’t deserve the lack of faith its studio has in it. In fact, it’s almost good, so close to success that its flaws truly become frustrating. Those flaws are all behind the camera, starting with the awful cinematography by Dan Laustsen. I haven’t seen a movie this obsessed with light coming through venetian blinds since 1984. The light is so distracting that it blots out Danny Glover’s entire face during his best scene. Much has been written about Hollywood’s inability to light Black skin, but considering that Laustsen also shot “Mimic” and “The Shape of Water,” I must conclude that his lighting here is a misguided stylistic choice.

The editing is also problematic, as action scenes (and even dramatic ones) too often end several beats too soon. The cadences are off-putting and rushed; numerous times the acting or the action was so involving that I wanted to spend more time within the scenes. Screenwriters Steve Antin, John Stuart Newman and Christian Swegal put in more drama than one might expect for a standard actioner, but the capable actors are undermined by the film’s construction. Director Babak Najafi manages to correct the pacing issue during the admittedly excellent action climax, but it’s too little, too late.

Whenever “Proud Mary” falters, the extremely talented Henson picks the film up and carries it on her capable shoulders like a wounded comrade. Just watching her from scene to scene is pure joy. Henson is an actress whose performances manifest themselves in her entire body. Here, she plays a tough hitwoman whose unexpected maternal instinct comes with a heaping side order of guilt. These conflicting feelings seem to emanate from her soul. Watch how she temporarily melts in the arms of a former lover before coming to her senses, or how she holds her head when she tells her orphaned young ward Danny (Jahi Di'Allo Winston) what to do in case of her demise. Or how she nonchalantly blows people away with the coolness of Schwarzenegger or Stallone. Her parental arguments with Danny are also delivered with expert comic timing and she’s savvy enough to know when to let Winston steal the scene. One senses this was a passion project of hers because she’s fully committed even when the film lets her down.

In addition to Winston, whose lack of precociousness is refreshing, “Proud Mary” also has good performances by Billy Brown, who plays the aforementioned love interest and Danny Glover, whose Godfather-like character marks his return to bad guy roles. The best parts of “Proud Mary” are the moments when the film investigates the complicated emotional contracts between its characters. Much of Mary’s story entails her attempts to hide betrayals from the people she cares for, especially where Danny is concerned. Danny’s father is the first hit we see Mary perform, and her guilt at leaving him parentless weighs on her conscience almost as much as the fear that Danny will figure out her connection to him. When Benny spills the beans about Mary to Danny, Glover superbly plays the moment like a more charming Bill Sykes from Oliver Twist.

“Proud Mary” has enough going for it that one wishes for an “All the Money in the World”-style do-over: Replace the cinematographer with Ernest Dickerson, perhaps, and the editor with the folks from “Baby Driver.” Alas, that future won’t come to pass. I am giving a mild thumbs down here, but if you’re a fan of Ms. Henson, don’t let me stop you from seeing this. Hell, if you make it a hit, perhaps Screen Gems will do its damn job next time. 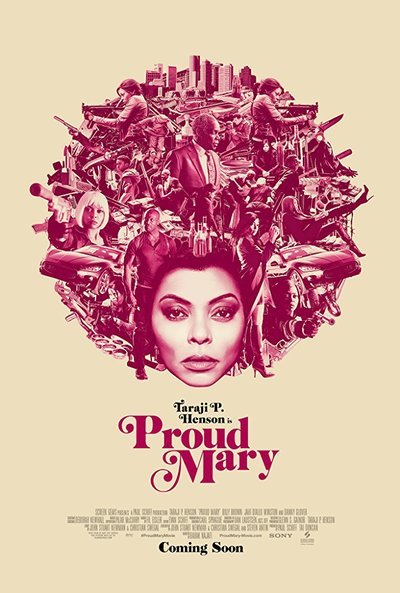