The Shape of Water

In James Whale's 1935 film "The Bride of Frankenstein," the monster (Boris Karloff) says mournfully, "Alone: bad. Friend: good!" That's what Guillermo del Toro's latest film "The Shape of Water" is all about, the loneliness of those born before their time, born different. "The Shape of Water" doesn't cohere into the fairy tale promised by the dreamy opening. It makes its points with a jackhammer, wielding symbols in blaring neon. The mood of swooning romanticism is silly or moving, depending on your perspective. (I found it to be both.) The film starts in a wavering green underwater world, with a woman floating in what looks like a drowned Atlantis. The image is otherworldly, magical, and Alexandre Desplat's score is wistful and bittersweet. Richard Jenkins narrates, asking helplessly, "If I spoke about it, what would I tell you" about what happened to the "princess without a voice"?

The "princess without a voice" turns out to be the mute Elisa (Sally Hawkins), who mops floors in the cavernous underground tunnels of a Baltimore-based corporation (the word OCCAM—as in razor?—in towering letters over the entrance). Working alongside Elisa is Zelda (Octavia Spencer), who provides constant running commentary through the day, responding to Elisa's sign language with a torrent of words. The year is 1962, the background is the space race and the Cold War. The head honcho at the company is a sadist racist named Strickland (Michael Shannon), who swaggers around carrying a cattle prod (which he calls an "Alabama howdee-do"). Whatever is done at the corporation is top secret, and everyone is paranoid about the Russians, especially once "The Asset" arrives in a portable tank. The Asset is the Amphibian Man (Doug Jones), discovered in the Amazon, once worshiped as a god and now contained in a tank, enduring occasional torture via Strickland's howdee-do. The scientist Hoffstetler (Michael Stuhlbarg) pleads for mercy on the creature's behalf. The Amphibian Man should be studied, not destroyed.

Meanwhile, Elisa is drawn to the "monster," and begins a secret campaign to gain his trust. She offers him hard-boiled eggs. She plays him Benny Goodman records. She teaches him sign language. The courtship sequence is the most successful in the film, calling to mind the stunning first half of "The Black Stallion" when the shipwrecked boy attempts to tame the wild horse, or the early sequences of "E.T." when the child and the alien start to communicate. Monster movie references abound throughout "Shape of Water": "King Kong," "Creature from the Black Lagoon," "Starman," and—most of all—Jean Cocteau's "Beauty and the Beast," with one scene in particular an explicit homage.

Production designer Paul D. Austerberry has a field day, creating multiple atmospherically rich worlds, so real you can smell the dank rot in those basement corridors. Elisa's apartment is green-tinted, with green bathroom tiles, green water in the tub. (Green, as we are told multiple times in different contexts, is "the future.") Even more symbolically, her apartment hovers over a huge movie palace, and she lives amidst the echoes of the fantasy world below. Strickland's suburban home is a psychotic "Mad Men" set, so yellowy-bright it's clearly not "the future" but the delusional complacent past. Cinematographer Dan Laustsen creates a clammy wet mood, windows streaming and swirling with raindrops, shadows wavering on the walls, the overall feeling being submersion into the underwater world of The Asset. The film looks like a dream.

Elisa teeters on the edge of being "twee," and there are moments when Hawkins crosses the line into self-consciously adorable spunkiness. When she stares starry-eyed at a pair of red shoes (i.e. ruby slippers) circling in a shop window, it's really pouring it on a bit too thick. What's refreshing about the character is her courage and resourcefulness, and her brisk matter-of-fact attitude about her sexual needs. (She masturbates every morning after setting an egg timer so she doesn't get behind schedule). She looks at Amphibian Man—his nictitating membrane, his 12-pack abs, the Ken Doll mound between his legs—overwhelmed by attraction. She confides in Giles, her gay neighbor (Richard Jenkins, in the best performance in the film) who is tormented by unrequited love for a young guy who works at a diner. Giles' television is always tuned to old movies, so he can revel in Betty Grable, Alice Faye, Bojangles and Shirley Temple tap dancing up a stairway.

"The Shape of Water" shows over and over again the demonizing of the "Other," the heartlessness of denying living creatures dignity. The film is on certain footing when it's focusing on the brutal treatment of the monster, the "voicelessness" of Elisa, the lonely pre-Stonewall gay man. They all come from "the future," before their time. But when the film portrays contemporary real-life events—the African-American couple told they can't sit at the counter, Strickland's racist comments to Zelda, the news footage of fire hoses turned on actual civil rights marchers—the fragile fabric of the film is broken. There's something unsettling about using these things as "atmosphere," even as the moments dovetail with the overall theme. At its worst, using these real-life events feels like a shorthand, a too-obvious pointing out of the similarities between the real world and the fairy tale, in case we didn't get it.

As Elisa, Giles, and Zelda team up to try to save the Monster, the film jerks away from the single-minded energy of the dreamlike courtship sequence. The second half of the film—choppily episodic, drawn-out—is noticeably weaker than the first half. The film feels much longer than it is. There are elements that work beautifully and elements that don't work at all.

A good artist doesn't necessarily set out to please the audience. A good artist sets out to please himself. Sometimes the two things merge, and in the best of del Toro's films, they do. His is an enthusiastic and passionate mind. The devotion of an artist—whether it's Leonardo da Vinci, The Troggs, John Cassavetes, Chantal Akerman, whoever—to what turns them on is catching, and audiences feel it. In a corporate-run franchise-driven industry, del Toro's movies are refreshingly personal. All of this is true of "The Shape of Water," but still, something's off. 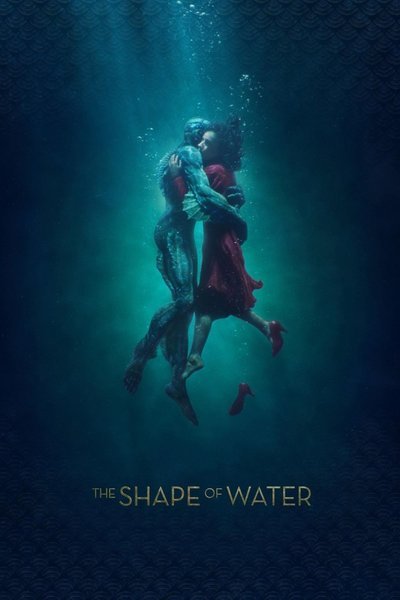