Looney Tunes fans out there may fondly recall the 1957 short “Show Biz Bugs,” in which vaudevillians Bugs Bunny and Daffy Duck engage in fierce applause-bait competition, ending with Daffy bringing down the house by literally immolating himself. (An act “that no other performer has dared to execute.”) Noting the crowd’s reaction, Bugs tells Daffy the crowd is ripe for an encore, but Daffy’s spirit, ascending to the Pearly Gates, replies, “I know, I know. But I can only do it once.”

There has been more than one motion picture that takes place entirely on a computer screen—indeed, Wikipedia now has a page devoted to the sub-sub-genre—so the thing can, in fact, be accomplished more than once. But should it be? This was a question I asked as I got that sinking feeling about ten minutes into “Profile,” wondering if it would indeed be an entire “computer screen movie.” Which indeed it turned out to be.

This is especially disappointing given the director of this ostensible thriller—in which an investigative journalist, named Amy and played by Valene Kane, skates on thin ice by masquerading as an Islam convert in order to attract ISIS recruiters—is directed by Timur Bekmambetov. The filmmaker who made you believe a sports car could successfully drive on the wall of a circular room, in one of those “Watch” movies, either “Night Watch” or “Day Watch,” I don’t remember which. In any event, a man capable of such feats of cinematic lunacy ought not be limiting himself to one screen. Bekmambetov’s pictures, which also include the possibly sublimely obnoxious 2008 “Wanted,” are object lessons in the thesis articulated by Tony Zhou in his landmark video essay about a different filmmaker, Michael Bay: “We are really visually sophisticated and totally visually illiterate. We can process visual information at a speed that wasn’t common before, but thinking through what an image means, not so much.”

One thread, intertwining with Amy’s interactions with a charming ISIS dude named Bilel, involves a young English woman who went ISIS and wound up stoned to death. A memorial video shows the girl playing, on acoustic guitar, a version of Radiohead’s “Creep.” Some minutes later, navigating between her new terrorist friend and a bossy editor and more, Amy cries out, “I don’t belong here.” Get it?

While it’s difficult, obviously, to bring nuance to a topic so immediately repellent as ISIS terrorists brainwashing Western women and turning them into sex slaves, the filmmakers seem only interested in propagating and amplifying stereotypes. And not only about terrorists. The handsome Shazad Latif, as Bilel, is styled to be a snack to Western eyes, what with his luxuriant hair and aviator sunglasses. He’s bluff and pushy and a bit of a bore, starting in on Amy/Melody to get down to Syria right away. “You’ll never want to leave,” he says, showing himself standing near a swimming pool in one exchange.

Far more egregious is the portrayal of Amy and how she gets to “know” Bilel in the first place. She seems to be the world’s most unprepared investigative journalist, concocting her Islam-convert persona out of whole cloth, so to speak. She’s barely learned how to put on a burqa when Bilel makes his first avid call. She also keeps her pet dog around the apartment—I know, where else is she gonna keep him, but hear me out, Islamic terrorists in particular have a thing about dogs, so if one shows up in your screen, it’s a bit of a giveaway regarding your credibility.

Amy’s also bigoted—she doesn’t trust a tech-savvy colleague because he’s of Arabic descent. And she’s inept personally as well as professionally; we soon learn one reason she’s so desperate to get this story off the ground is that she’s £1,990 behind in rent. And never mind her topsy-turvy relationship with her bourgeois boyfriend.

One signal characteristic of this film is that the director makes sure there’s a whole lot of all apps and screens and tabs and desktop icons, and that they pop up really fast and sometimes only stay up long enough for you to blink—it’s a harried world in cyberspace, baby. Amy's lack of ability in navigating all of this technology constitutes a sexist cliché par excellence, a variant on the old “can you believe women drivers?” trope.

The movie is loosely based on a book by the French journalist Anna Érelle called In The Skin of a Jihadist. Like Amy in this movie, Érelle herself posed as an Islam convert looking for opportunities in ISIS, and like Amy, she used the screen name “Melody Nelson” as an alias. Love that Gainsbourg. One hopes Érelle did not commit all the gaffes that Amy does here. 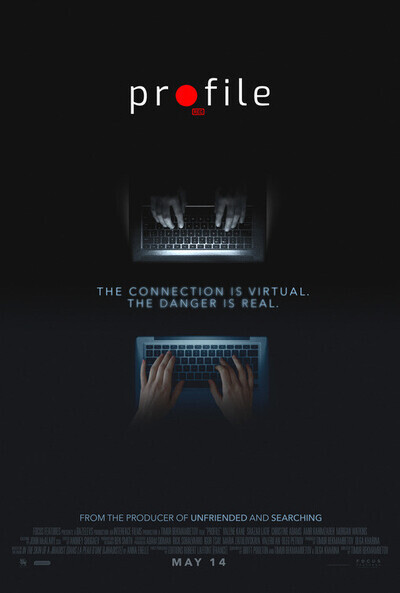 Writer (based on the novel "In the skin of a Jihadist")