Google the name "Thor" and of the 140 million results — give or take — most of the highest-raking ones concern the hammer-wielding Marvel superhero, founding member of The Avengers and protagonist of the 2011 franchise-building feature film and its upcoming sequel, "The Dark World."

You'll have to scroll way down to come across the Wikipedia page for Thor Heyerdahl. Not really on most people's radar anymore, but in 1947 the ethnographer and explorer became an international sensation after embarking on what was considered by the scientific and publishing communities to be a foolhardy 5,000-mile expedition from Peru to Polynesia by raft.

His book about the voyage sold more than 50 million copies and a 1951 documentary earned the Academy Award (you can check it out on YouTube). Joachim Roenning and Espen Sandberg's dramatization, "Kon-Tiki," Norway's nominee this year for the Oscar for Best Foreign Film, comes to our shores in a simultaneously-filmed English language edition, and while the wind goes out of its sails a few times along the way, this is a ravishingly photographed, old-fashioned man-against-the-elements adventure epic propelled by human-scaled heroics.

"Kon-Tiki" establishes Heyerdahl (Pal Sverre Hagen) as a born risk-taker in a childhood prologue, and then jumps to Polynesia in 1937, where he develops his theory that the islands were not populated 1,500 years earlier by Asians, as was conventional wisdom, but by South Americans. (Anthropologists largely doubt that theory today.) Next stop: New York, where he fails to convince the starchy naysayers at National Geographic and other publishers, although, one concedes, a story about Norwegians drowning in the Pacific probably would sell magazines.

While the film isn't clear on what drives Heyerdahl (a mix, it is suggested, of stubbornness, ego and ambition), he is not to be dissuaded, even by his wife (Agnes Kittesen, in a thankless role), who pleads, "Don't do this. You can't even swim."

But when the president of Peru steps up to offer assistance, the stage is set for Heyerdahl and his small crew to make the more than 100-day journey across the Pacific Ocean using an authentically constructed balsa wood raft. It is christened Kon-Tiki after the Incan sun god said to have guided the ancient sailors.

Despite the inherent dangers ("There will be no one to save us out there," Heyerdahl cautions), the human drama of "Kon-Tiki" is underdeveloped. Only one crew member makes an impression: Herman Watzinger (Anders Baasmo Christiansen), a former engineer turned refrigerator salesman, who yearns for adventure, but gets more than he bargained for and threatens to go all Queeg on his shipmates.

The downtime the men must have experienced would have provided screenwriter Petter Skavlan ample opportunity for scenes in which the crew talked about their lives and allowed the audience to become more invested in them. Instead, they become familiar to us only as the Guy with the Radio and the Parrot, the Guy Who Plays the Guitar, or the Guy with the Camera.

But once "Kon-Tiki" gets out to sea, it delivers several thrilling set pieces that keep the film on a steady course. There is a powerful storm; a tense, blood-soaked shark attack; a close encounter with a whale; and, in the last 240 yards, a deadly reef to navigate.

Through it all, the calm and charismatic Heyerdahl urges the men to "have faith." "I have faith," the navigator responds at one point when he discovers the craft is not on its desired course. "I also have a sextant."

"Kon-Tiki" is filmed in a more realistic style than the fanciful "Life of Pi," but it offers no less a sense of wonder, as evoked in scenes with flying fish, electric eels that light up the nocturnal waters, or simply the rapturously beautiful panoramic view of the tiny craft as a speck on the vast oceanscape.

As with "Argo," the fact that the outcome is known does not diminish the suspense or excitement of witnessing how Heyerdahl and company accomplished their own best bad idea.

Never mind the guy with the hammer. "Kon-Tiki" could put this Thor back on the map. 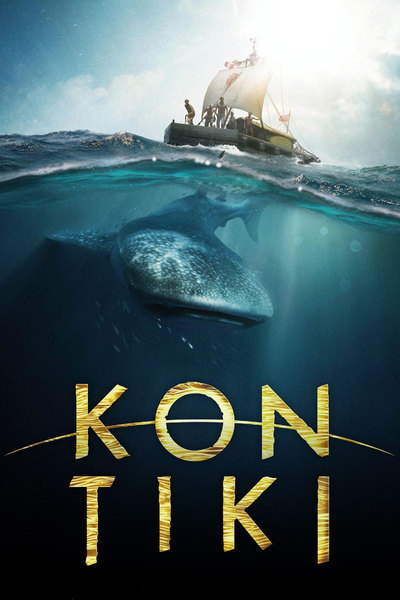