If you watched only the trailer, you might dismiss "Permission," written and directed by Brian Crano. It looks like a run-of-the-mill comedy about a bored couple deciding to sleep with other people. Didn't 2011's "Hall Pass" already cover this? But Crano's film is refreshingly complex and filled with the unexpected. Every character emerges in some way as three-dimensional. Nobody's a "type." What is most unexpected about "Permission" is its sense of poignancy and tenderness. In its own way, it's quite heartbreaking.

Anna (Rebecca Hall) and Will (Dan Stevens) were high school sweethearts and are still together 10 years later. She is getting her Ph.D in music, and he makes furniture in his own shop in a Brooklyn storefront. (Realistic New York real estate is not the film's strong suit.) They are happy. They have a good sex life. They love each other. There's nothing wrong. (He's even bought a ring, but he's waiting for the right moment to pop the question.) At dinner one night with Anna's brother Hale (David Joseph Craig) and Hale's long-term boyfriend Reece (Morgan Spector), Reece makes fun of Anna and Will for only having had sex with each other. How do they know what they're missing? Reece is joking, but Anna and Will are jolted by the observation. After a series of discussions, they decide to sleep with a couple of other people apiece. They check in with each other obsessively. "Are you okay with this?" "I'm okay! Are you okay?"

Crano's script is smart, funny and insightful. What is interesting in "Permission" is its interrogation of monogamy from an open-ended standpoint. It doesn't come down hard on one side ("Monogamy is preferable") or the other ("Monogamy is unrealistic"). This open-endedness gives the characters a lot of freedom, since the writer isn't pleading a specific case. Crano is interested in relationships, and how they grow and develop (or don't). The wider culture is extremely clear in its rules for what monogamy looks like, and what couplehood looks like. But as Hale says to Reece at one point, you have to "account for growth." What happens when one person changes the dance step? You can't have one half of a couple suddenly doing a tango while the other half continues to do the waltz.

At first, Anna and Will adjust the dance step in sync. They go out to a bar to troll for potential hookups. They discuss everything beforehand. Anna scores first. A hot guy named Dane (François Arnaud) hits on her and she goes home with him. Shortly after that, black-leather-clad Lydia (Gina Gershon) saunters into Will's store, buys a table, and asks him to deliver it himself. She puts her intentions right out there, staring at Will with an aggressive "You know you want it" expression. Will goes for it. Anna and Will return home from hookups and talk about them, reasserting their relationship's primacy. Well, we know that can't last.

Will and Anna's experiment triggers all kinds of changes in Hale and Reece's relationship. In "Permission," the gay couple gets almost equal time in the narrative as the straight couple, the two stories running in tandem. It's another element that sets "Permission" apart from similar fare. The gay characters aren't there as sidekicks, or as people with nothing better to do than to sit around and give endless relationship advice to their straight friends. They've got their own stuff going on, and the two sets of relationships spark off each other in a chain reaction. Hale and Reece have been together for almost as long as Will and Anna, and Hale is now ready to think about being a parent. He sneaks peeks at adoption websites with the guilty air of a guy looking at porn while his wife is in the next room. On Hale's daily walks in the park with the dog, he meets Glenn (Jason Sudeikis), an exhausted new father, nodding off while holding his newborn. The two men talk about parenting, relationships, how babies change things. Reece is blindsided by Hale's new obsession. What once seemed stable is now in a state of flux.

At first glance, Dane and Lydia both seem like recognizable "types." Dane is the hot guy with tall hair, a musician who lives in a loft you wouldn't believe. Lydia is the up-for-it divorcee in the penthouse, coming down the stairs to greet Will in a slinky black dress. But both Dane and Lydia emerge as complex characters. That's the fun of it. Arnaud brings a soft openness to Dane which completely destabilizes the normal function such a character usually plays, and Gershon allows us to see underneath Lydia's sex-bomb mask (the difference is extreme), so much so you want a whole movie about her character. When she first kisses Will, she moans, "You smell like my father." Will and Anna, used to each other, struggle to understand the unfamiliar landscapes of other people's emotional and sexual makeups.

Rebecca Hall has been doing consistently excellent work for years, and here she manages to suggest—without any dialogue to support it—that something is not being addressed in Anna's life, something essential to her, but Anna couldn't even say what it was. She's not even present to it at the beginning. Dan Stevens does not condescend to his character: this is a nice person (sometimes actors have a hard time playing "nice"), who's perfectly fine with having slept with only one woman. The two create a believable sense of not just intimacy, but familiarity.

By allowing Dane and Lydia to be real people, by allowing Hale and Reece equal space in the narrative, "Permission" bites off a little more than it can chew—the film can feel obediently episodic at times—but biting off more than you can chew is better than playing it safe. A statement like "I don't know who I am without you" is usually seen as romantic in relationship movies, but "Permission" wonders if maybe it's more than a little neurotic and unhealthy. Best of all, the film takes nothing as a given. The plot of "Permission" is well-trod ground. Crano knows it, but plunges forward, tipping over all of the traditional devices, upending expectations, thriving on the messes it makes. The result is a funny and surprisingly poignant film. 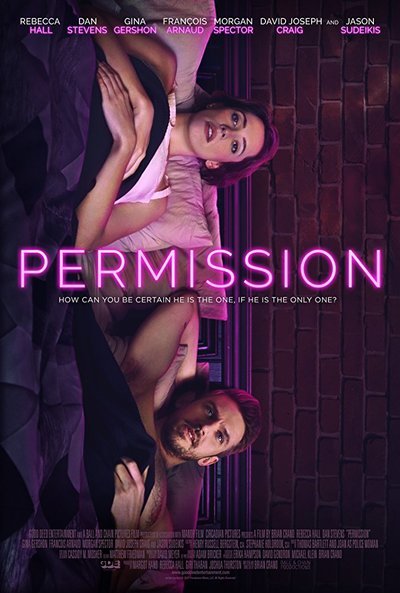 Dan Stevens as Will