Just you try to resist the impossible adorableness offered up in the latest Disneynature documentary, “Penguins.” You cannot do it, despite the cutesy anthropomorphizing, the too-tidy nature of the story it’s telling and the knowingly cheesy soundtrack of ‘80s tunes accompanying these creatures’ adventures.

Come on. It’s 76 minutes of penguins waddling across Antarctica. In IMAX.

And as is always the case with these Disneynature documentaries, which come out just about every year around Earth Day, the images are truly spectacular—especially if you can see them on a larger-format screen. Following the likes of “African Cats,” “Bears” and “Monkey Kingdom,” “Penguins” is one of the better entries, with its balance of engrossing storytelling and how’d-they-get-that? shots. Series veteran Alastair Fothergill, director Jeff Wilson, co-director Mark Linfield and their team have gone to extremes at the end of the Earth under brutal weather conditions to capture moments of both cuddly intimacy and life-threatening intensity. (Since this is rated G, you know it’s going to be OK, although the film’s climactic showdown is especially stressful.)

At the start, though, everything is awesome. We meet an Adelie penguin named Steve—because the animals in these movies always get names and back stories and human characteristics—as he toddles along on a sunny, icy stretch of Antarctic tundra. (He does this to the tune of Patti LaBelle’s perky “Stir It Up,” which you probably haven’t heard since it accompanied Eddie Murphy’s antics in “Beverly Hills Cop” back in 1984.) Steve is 5, we learn, and making the annual 100-mile trek alongside hundreds of thousands of other male penguins to the colony where they’ll find female partners, build nests, mate and start families. (This was also the premise of the Oscar-winning 2005 documentary “March of the Penguins,” which focused on the larger emperors. Truly, there’s no such thing as too much of a good thing here.)

But we can tell from Steve’s clumsy way of walking as he bobs and wobbles and slips along the slick surface that he’s been tailor-made to fit a certain lovably awkward persona. Just watching him flap his little black-and-white flippers is good for a giggle. That becomes especially clear once we hear the enjoyable everyman tones of Ed Helms, who serves as both narrator and Steve’s internal voice as he fumbles from one challenge to the next. This is all new to Steve, but still—the frequency with which he wanders off, gets lost, shows up late or finds himself in danger is enough to make you wonder whether we’re really watching the same “Steve” the whole time. Could one penguin be so consistently clueless in such narratively convenient fashion?

Less cynical viewers will find themselves duly swept up in the majesty of the proceedings, which are high on awe-inspiring snowy vistas and crystal-clear underwater swims and low on actual information and science. We do, however, see Steve and his fellow penguins as they struggle to scurry from predators including killer whales, leopard seals and skuas, birds that swoop in to pick off both vulnerable chicks and unattended penguin eggs. Steve and his mate, Adeline, are both dutiful parents who work well as a team protecting their two furry babies (good lord, are they cute) and simply watching them in action as we do here, with amazing, up-close access, does more to help us relate to them than any overbearing voiceover could.

Fothergill, Wilson and their team also capture the unforgiving nature of the elements, including a storm that sweeps in with blinding, blizzard conditions and hurricane-force winds. Such sequences make you appreciate the tremendous amount of work it took over a three-year shoot to bring “Penguins” to the screen—so be sure to stick around through the closing credits to get your how’d-they-get-that? questions answered. 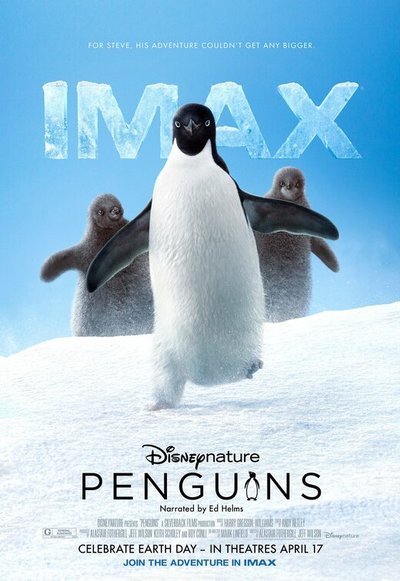