Bears: They’ve often occupied the top spot on the ThreatDown, the running list of creatures and things Americans should fear most on "The Colbert Report." But the bears of "Bears" are mainly the playful, adorable kind, and not the ones who come down from the mountains to rummage through your suburban garbage cans in the middle of the night.

This is the latest documentary from the folks at Disney’s Disneynature label, which releases a family-friendly non-fiction film just about every year around Earth Day. "Earth" (2009) and "Oceans" (2010) were both stunning examples of the possibility of this genre. Entertaining and educational, they featured plenty of jaw-dropping, how’d-they-get-that-shot moments, and they made exotic, faraway lands seem accessible. "African Cats" (2011), likewise, was beautiful but plagued by pervasive narration from Samuel L. Jackson over-explaining every instinct and action in cutesy fashion.

"Bears" also features nearly wall-to-wall voiceover, but this time it comes courtesy of John C. Reilly. His inherently likable, goofy sweetness shines through, making the material, um, bearable, if you will. Having voiced the title character in Disney’s animated hit "Wreck-It Ralph," Reilly has some experience in this arena, and his jokey asides seem less hokey than they might have looked on paper.

Still, the cuddly (and condescending) anthropomorphism persists in the film from co-directors Alastair Fothergill and Keith Scholey, both veterans of this genre—ostensibly to make the characters more relatable for the littlest kids in the audience. (The recent IMAX 3-D documentary "Island of Lemurs: Madagascar" mercifully was free of this narrative approach.)

My movie-savvy 4 ½-year-old son still had a ton of questions, though. During a recent screening, loudly whispered conversations went something like this:
Nicolas: "Mommy, what is the wolf trying to do?"
Me: "He’s trying to eat the bear cubs, baby."

Yes, things get a little dicey for our plucky protagonists in "Bears." Cycle of life, and all. Sunrise, sunset. But nothing nearly so gnarly happens as it did in "African Cats," when a bunch of lionesses tore apart a bloody zebra carcass. The violence here is more fleeting, and mainly intended as a demonstration of the lengths to which the mama bear will go to protect her babies.

"Sky" is the name she’s been given. When we first meet her, she’s snuggling with her fresh, dewy newborns—a boy and a girl named Scout and Amber—in a big, furry ball inside a snow-packed cave in the Alaskan wilderness. (The film doesn’t bother to address who or where the father might be, even though the kids who’ve accompanied you might wonder.) The intimacy of these early moments is quietly disarming; it feels like a great privilege.

But soon they must get up, dig their way out and forage for food. The majority of "Bears" follows the family’s trek from the majestic, snow-covered mountains (where they narrowly miss being pummeled by an awesome avalanche—at least that’s what the editing suggests) down to sea level to fish for salmon. The cubs tumble down hills and tussle with one another. Sky nudges them along. Reilly chimes in with lighthearted commentary.

It’s all fun and games until they reach what should be an idyllic meadow. But there are lots of other bears there—hungry bears hunting for the same food they are—and they’re all ruled by the fearsome Magnus. At various times, Sky must protect her cubs from Magnus’ menacing glare. (Later on, they’ll also run into Chinook, the outcast wild card, as well as the aforementioned wolf on the prowl.) The vague hint of the possibility of cannibalism lingers in the air throughout "Bears," but it’s unclear how prevalent this sort of practice actually is.

"Bears" could have used a lot more science; more substantive information in the place of wacky one-liners. Still, the images trump everything. They can be both intimate and vast but they’re always crisp, dazzling and a marvel to behold. The sight of underwater footage of salmon swimming upstream before flinging themselves into the air—often across the bears’ furry mugs and into their open mouths in super slow motion—is both a wonder and a delight.

Want to know how they got that shot, and so many others? Be sure to stick around during the credits for some behind-the-scenes footage that’s just as awe-inspiring. 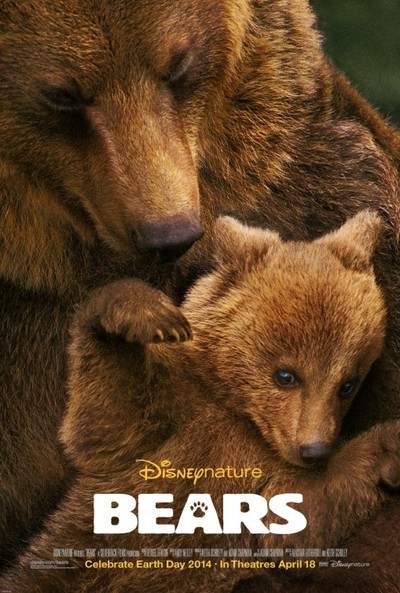