Here’s how thoroughly winning the latest DisneyNature documentary “Monkey Kingdom” is: It features the obvious choice of the theme from the 1960s TV series “The Monkees” at the start, but instead of groaning or rolling your eyes (as you should), you’ll probably find yourself with a big, goofy smile spreading across your face.

That’s because the images accompanying that rather on-the-nose song choice are of insanely adorable macaque monkeys doing what they do best: running and jumping, flailing and flinging themselves with abundant exuberance. Fuzzy-haired, wide-eyed and infinitely expressive, they are a joy to behold. And we get the pleasure of watching them as they go about their daily antics and activities through the kind of beautifully crisp, intimate cinematography we’ve come to expect from this series.

Just about every year around Earth Day, Disney releases an educational, family-friendly documentary through its DisneyNature branch. They usually feature dazzling visuals, some moments of danger and, too often, some cloying anthropomorphosis. The earliest entries, 2007’s “Earth” and 2010’s “Oceans,” were thrilling examples of the eye-opening power this kind of filmmaking can provide. More recently, 2011’s “African Cats” and last year’s “Bears” featured animals who get cuddly names and back stories and cutesy, structured narratives.

“Monkey Kingdom,” directed by series veterans Mark Linfield and Alastair Fothergill, strikes a nice balance between these two instincts. You’re likely to laugh and learn in equal measure–and so will your little ones.

Its heroine is Maya, a lowborn macaque monkey living in a jungle in Sri Lanka. In this community’s rigid social structure, Maya must dwell on the ground, foraging for scraps and struggling to survive while the alpha male, Raja, and a trio of red-faced females known as The Sisterhood rule from the highest treetops and feast on the choicest fruit. She grooms Raja and serves as a play structure for the sisters’ kids. This is how it’s always been. This is how it always will be.

Or will it? “Monkey Kingdom” follows Maya’s unlikely but inspiring journey as she becomes a single mother to a big-eyed baby boy called Kip, then the group’s de facto leader when a rival band of monkeys takes over the ancient ruins that have been their longtime home, forcing them to find somewhere else to live. Along the way, they run into a variety of other types of fascinating creatures, from elephants to peacocks to scorpions to a monitor lizard, which stealthily preys on them as they forage for food underwater in a lily pond.

There are some scenes of unbearable tension but also true wonder, including a slow-motion flight of winged termites in the morning sunlight after a monsoon, which has an ethereal, haunting quality about it. (The beauty is short-lived, though: Those poor insects then become quick snacks for the hungry monkeys.) The amazed sensation of wondering how they got that shot isn’t as frequent here as it was in the first couple of DisneyNature docs, but “Monkey Kingdom” does have its moments.

Whatever the situation, Tina Fey’s slyly hilarious narration enhances our connection with it. Fey can be dryly funny (no shocker there), goofy and sometimes even solemn when the occasion calls for it, and she finds just the right tone every time. It’s also a refreshing change of pace to have a woman narrate one of these types of films–or at least someone besides Morgan Freeman. (No offense, Morgan Freeman. It’s just always you and your distinctively gravelly, authoritative tones.)

Despite the movie’s many joys, it’s hard to shake the sensation that you’re watching a lot of stuff that’s been staged and manipulated. Once the monkeys are forced to flee and find shelter elsewhere, they enter a nearby town where the makings of a kid’s birthday party await them in a classroom, complete with a bright pink sheet cake and plenty of balloons to pop. Cameras just happen to be inside when the mayhem occurs. What are the odds???

Children in the audience won’t think twice about this–why shouldn’t these impish little creatures wreak havoc wherever they go?–and they’ll giggle their heads off at the sight of the mess. But there certainly seems to be enough material available to illustrate their mischievous personalities without having to manufacture content.

As the song goes, people say they monkey around. And the macaques of “Monkey Kingdom” seem to do that just fine on their own without any prodding. 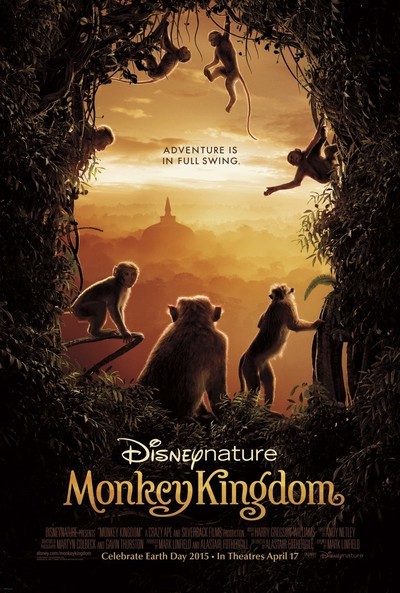