There have been so many films that have derived some degree of inspiration from Quentin Tarantino's landmark work that they practically constitute their own genre at this point. The film from director Wayne Kramer appropriates all of its outward trappings—an eclectic cast, extended bursts of colorful dialogue, gruesome violence, a twisty structure, and moments of outright weirdness—but forgets to include any of the wit, intelligence or inspiration that helped bring those elements to life. As a result, what might have made for an endearingly twisted anthology instead comes across as a creative dead end that not only fails to live up to the heights of "Pulp Fiction" but might well wind up suffering in comparison to such similarly themed gumdrops as "Mad Dog Time" and "Things to Do in Denver When You're Dead."

The film tells a trilogy of tales that all start at a grungy Deep South pawn shop in which proprietors Vincent D'Onofrio and Chi McBride fill the time between launching strangers on bizarre journeys by bantering at length about such subjects as tater tots and the racial derivation of Santa Claus.

In the first tale, 'The Shotgun,' three meth addicts (Paul Walker, Kevin Rankin and Lukas Haas) plot to rob a local dealer (Norman Reedus) of his stash, but the scheme hits an immediate hiccup when one of them pawns the shotgun that is a key part of the plan in order to buy the gas needed to drive to the crime. While trying to pull themselves together enough to find a new weapon and do the job, the guys ponder why they are white supremacists when they actually like African-Americans and Jew. Thomas Jane wanders in bearing a shotgun that he offers as a form of salvation before disappearing, hopefully to finally bring "Homeless Dad" to the big screen.

Next up is 'The Ring.' It kicks off with Matt Dillon and Rachelle Lefevre as a newlywed couple arriving to pawn her wedding ring after having their bank account hacked. While there, Dillon finds a ring that belonged to his first wife who mysteriously vanished six years earlier and leaves his new bride behind so that he can pursue her, a journey that eventually leads to a local weirdo (Elijah Wood), an extended torture session involving fishhooks and a chisel, and a final revelation straight out of Alan Rudolph's little-seen directorial debut "Barn of the Naked Dead" (a.k.a. "Nightmare Circus").

In the final story, 'The Medallion,' Brendan Fraser plays a down-on-his-luck Elvis impersonator who hocks a medallion for enough money to get cleaned up before a county fair performance that night. After inadvertently stoking tensions between two local barbers—don't ask—he finds himself at a literal crossroads that comes complete with a mysterious stranger offering to make his dreams come true in exchange for his soul.

In addition to "Pulp Fiction," screenwriter Adam Minarovich also borrows ideas from sources ranging from the deliciously ironic tales of O. Henry to the cheerfully gruesome twists and turns of old horror comics like "Tales from the Crypt" and their ilk. But he fails to bring much of any of his own to the party, and the film is left wanting as a result. The first story is so aimless—especially the endless white supremacy talk that has apparently been included only to up the bad boy quotient via its "edgy" dialogue—that it barely seems to exist, and wastes a fairly funny performance by Paul Walker that might have gotten him some notice had it been in a better film.

With its supposedly heady brew of sex, violence and borderline misogynistic imagery, the middle story seems to have been designed specifically to raise hackles and inspire controversy, but it all seems too forced to be truly troubling, and its punchline is feeble. Of the three stories, only the finale comes close to working. It's still kind of a mess, but it at least tries to do something a little different. More importantly, it has a reasonably winning performance by Fraser, who throws himself into the role of a faux-Elvis with obvious zeal, and its climax, in which all three stories finally tie together (to the strains of "Amazing Grace," no less), achieves, if only for a few moments, the kind of demented grandeur that it otherwise fails to achieve the rest of the time.

One of the most disappointing things about "Pawn Shop Chronicles" is that it was directed by the usually interesting Wayne Kramer, who kicked off his career with the acclaimed drama "The Cooler" and followed that up with "Running Scared," a film so demented and lurid that the fact that it actually exists still boggles the mind. After that came the disastrous "Crossing Over," a film that promised to do for immigration what "Crash" did for racism and sadly did just that. This time around, he is clearly trying to return to "Running Scared" country, but fails to even live up to the low standards of "Crossing Over." Kramer is clearly a gifted filmmaker but based on his work here, he seems to be doing a very good job of hiding those gifts. 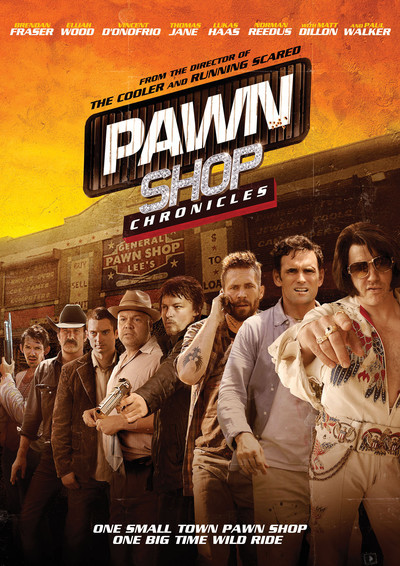 Thomas Jane as The Man