As the nation eagerly waits for Spike Lee’s new film “BlacKkKlansman,” produced by “Get Out” writer/director Jordan Peele and set for a world premiere at the Cannes Film Festival, the prolific American director has now adapted a Chicago theatrical production, but in a way that’s truly cinematic. True to Lee’s reputation of playing with the chemistry of storytelling, “Pass Over” has the air of an experiment and the clarity of poetry, as inspired by the news and told by artistry beyond far beyond Lee’s. In the grand scheme of his filmography it’s one of his smaller projects, but it is by no means a minor work.

Written by Antoinette Nwandu, the play “Pass Over” is directly inspired by Samuel Beckett’s Waiting for Godot just as much as it is the nation’s headlines of police killing African American men and women, like Laquan McDonald, who was shot 16 times in 2014 by Chicago Police Officer Jason Van Dyke. Like Beckett’s story, it’s an existential riff about two men that are not moving from one particular spot waiting on something to happen. But Nwandu’s vigorous play treats that concept as a means of societal stasis, with the constant hum of anxiety. Whenever gun shots are heard, they drop to the ground, in fear of the “angel of death” that they call the police. These men want to leave the block, but they’re not sure of what will be out there.

In this production directed by Danya Taymor, the two men in this case are Moses (Jon Michael Hill) and Kitch (Julian Parker), best friends who are homeless on the block of 64th and Martin Luther King Drive. With high-voltage performances from both, we see all shades of these men as they horse around, essentially performing for each other. They’re funny, vulnerable, magnetic. With percussive line-delivery and precise acting beats, Hill and Parker give their characters full emotional scales, and the simple set of a streetlight on a sidewalk is filled with an incredible energy. Just the same, Hill and Parker have the ability to change emotions on a dime, especially when they’re reminded of the loved ones they have lost, or the fears that have kept them on that block.

As “Pass Over” ruminates with these characters, and then later shows them interacting with two disturbing white men (one dressed up as a real Americana throwback, the other a racist police officer; both representing white supremacy), it has an invigorating no-BS approach. Nwandu's raw characters interact with abrupt and heavy-handed Biblical elements, from the idea of its title referring to the River Jordan, or touches upon the ten plagues, with one of the characters even being named Moses. One can see why a storyteller such as Lee would be drawn to the project, especially with its bombastic supporting characters and a spiritual element that’s unpredictable but larger-than-life.

Best of all, like the documentary “Whose Streets?” before it, which showed the experiences of those in Ferguson and the Black Lives Matter movement after Mike Brown was shot by Officer Darren Wilson in 2014, "Pass Over" expects you to already have empathy for its world and its heroes. If you think these men have nothing to fear from the police, “Pass Over” does not concern itself with persuading you; it turns a wounded culture into artistic aggression, throwing it all on the stage and daring you to look away.

Much of what I’ve talked about with “Pass Over” was already there before Lee decided to shoot the play, in secret, last year. His handling of the incredible material has an equal low-key quality, excelling at its goal to enhance the type of visual storytelling experience a theatrical production offers. Using numerous camera angles and expressive editing, Lee’s filmmaking emphasizes the emotion on Nwandu’s pages, like the abrupt cuts to Moses and Kitch dropping to the ground whenever they hear bullets. Extreme close-ups are utilized in very select passages, mirroring the immediate fourth-wall breaking monologues and word-less gazes of various projects of Lee’s past. There are sequences in which “Pass Over” uses so many cuts and different angles that it plays like a film that was shot on a very minimal set, as if unfolding in some type of microcosm—a further testament to the project’s artistic grandiosity.

Lee’s most powerful addition to the story comes from his consistent interest in documenting people. Along with the introduction of men and women from the Southside coming to the theater, we sometimes see them in a wide shot whenever he shoots the play from the backstage, looking out toward the crowd, as if putting them right there on the block with Moses and Kitch. And during specific moments within the play, Lee refers to close-ups of his audience members, like a silent Greek chorus whose facial reactions to Nwandu’s outraged story say it all without any words being necessary. As a brilliant mix of the theatrical and cinematic, Lee’s vivid adaptation of “Pass Over” does not concern just Nwandu’s story, but the very experience of it. 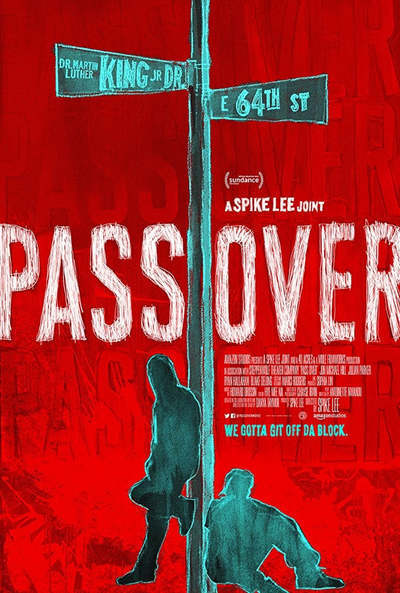 Director (in collaboration with)