We are republishing this piece on the homepage in allegiance with a critical American movement that upholds Black voices. For a growing resource list with information on where you can donate, connect with activists, learn more about the protests, and find anti-racism reading, click here. "Whose Streets?" is currently streaming on Hulu, and available at a discount rental price on digital platforms. #BlackLivesMatter.

The first thing you need to know about the documentary "Whose Streets?", about the chaos that engulfed Ferguson, Missouri after a 2014 police shooting, is that it is not meant to be a comprehensive, academic, all-things-to-all-viewers look at its subject. From its opening scene, which puts a camera in the back seat of a car as it eavesdrops on two people in the front, this film by Sabaah Folayan and Damon Davis tells you very plainly what it is: a subjective, literally ground-level look at this story—one that privileges the point-of-view of predominantly working class and poor African-Americans in a suburb of St. Louis.

The fact that the movie contains no interviews with police officers or government authorities has sparked some backlash among film critics who, one assumes, wanted more of an "on the one hand, on the other hand" approach. But there are dozens of written and filmed accounts of Ferguson that have already done that. This account is entirely concerned with what activists and ordinary citizens, and ordinary citizens who became activists, saw and felt in the weeks that followed the killing of unarmed Ferguson resident Michael Brown, a black man, by Ferguson Police Officer Darren Wilson, a white man. The race and class of the participants is central to the movie, because they help explain not just the point-of-view of the filmmaking, but the movie's relationship to the rest of American media and society.

This documentary is one piece of a prismatic American narrative of race and power that can stand alone, as a report from a community that was briefly a near-war zone, or that can be watched in relation to versions of the tale as told by TV news crews, Internet outlets, newspapers, magazines, radio reporters and social media commentators. What makes it unique and valuable is that it is not like those other versions, and has no interest in trying to be like them. The movie recounts not just the major incidents but also the black Ferguson community's specific point-of-view on what happened, with the anger and frustration that point-of-view entails. It is a straightforward attempt to redress an imbalance of storytelling power—to see and hear people who felt misrepresented or ignored at the time.

Brown, 18, was shot August 9, 2014, after stealing goods from a convenience store, then struggling with an officer through his squad car window. Brown fled the scene and Wilson followed, firing twelve shots at Brown, one of which killed him. A story quickly circulated that Brown put his hands in the air and told Wilson, "Hands up, don't shoot!"; Ferguson police officials and the justice department later disputed that detail, but it became an integral part of protest chants in Ferguson and elsewhere. Ferguson police released video from inside the convenience store showing Brown stealing a box of Swisher cigars and shoving a clerk, information that many in the community considered a bad faith attempt to smear an unarmed shooting victim by making it seem as if he somehow deserved to die. The department send heavily armed officers in riot gear and all-terrain vehicles to corral and push back protestors. The state government established a curfew. There were sporadic reports of looting, but for the most part the protests were nonviolent. Images of civilians taunting police and police manhandling civilians, buildings and cars burning, and chemical weapons, including tear gas, being used against civilians in an American city brought back collective memories of Detroit in 1967 and Los Angeles in 1992.

"Whose Streets?" replays all of this and more, but inverts the point-of-view. Rather than hear the story from news reporters and government officials, we hear it from a marcher who surveys a line of heavily armored police and says, "This is the military police. This is not the police we all know," and from activists who characterize police response as an over-response that's meant to demonstrate power rather than keep peace.

We get the sense of black people in Ferguson, who live in the city, and a predominantly white police force, much of which lives elsewhere, locked in a vicious cycle: street crime met by police violence met by protest (nonviolent and violent) met by an escalation of police presence that looks like footage from the early occupation of Iraq (a frequent comparison point for protestors). "We're trying to mourn, and you came here with 300 cop cars and riot gear and canine units," says Ashley, a local activist. "This is the same thing that pretty much got us here."

The title "Whose Streets?" poses a question that goes beyond geography and politics to encompass journalism and storytelling. When events as seismic as the Ferguson shooting and ensuing police crackdown and riots happen, the vast majority of people beyond ground zero experience a version of events that are filtered by mainstream media outlets and government spokespeople. The latter are invested in a particular, subjective, self-serving spin on events, just as the protestors are. The difference is that the media and government framework tends to present their version of the story as sober, objective and responsible, and any counter-narrative as a hysterical provocation, even when, say, Wilson likens Brown to a "demon" in an official report, and insists he's entirely free of racial animosity while a TV interviewer, ABC's George Stephanopoulos, stares blankly at him, so astonished that he can't find the words to argue why Wilson might be wrong about that.

There are points where this movie seems to want to right that imbalance of storytelling authority all by its lonesome, an impossible goal. There are also moments where the filmmakers don't always trust the innate power of the footage they've gathered on the ground and in people's homes, at community meetings and in conversations on sidewalks and in cars. There isn't much intrusion by the film's musical score, but when it does come in, you notice it, and not in a good way. "Whose Streets?" may also prove to be of limited value as a historical document precisely because of its decision to leave the broad-strokes, "this happened and then that happened" storytelling to mainstream sources while it lives in the in-between spaces, where activists balance neighborhood organizing and vocal protest with the requirements of daily life: making rent, raising their kids. But these are minor quibbles with a major work. This is a movie that doesn't merely tell a gripping, important story, but reminds us that the storyteller and the storytelling matter just as much.

"Whose Streets?" is currently streaming on Hulu, and available at a discount rental price on digital platforms. 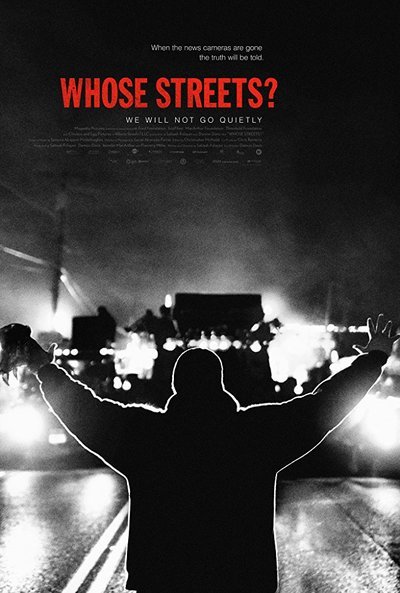