Paranormal Activity: Next of Kin

You know a horror movie isn’t working when you spend a lot of the time watching it trying to figure out the exact degree of deception going on in its title. How is “Paranormal Activity: Next of Kin” related to the other six films in this franchise? It's not really. Yes, there’s a found footage structure—although I’m not sure I’ve ever seen a movie push the boundaries of disbelief more in that department—and there’s a supernatural element, of course, but this script could just as easily be a “Blair Witch” sequel with a minor rewrite. It’s clearly an original story that's been slapped with the “PA” label and that only adds to the sense that there’s little creative depth here. "Paranormal Activity: Next of Kin" feels less like a chance to creatively reboot a hit franchise and more like a way to cheaply profit off any residual interest left in it.

In 2007, Oren Peli’s “Paranormal Activity” became one of the biggest independent horror hits of all time. Made for almost nothing, it was effective in part because of its relatable simplicity, telling the story of a haunting through cameras set up in an otherwise mundane suburban home. Like a lot of horror movies, the franchise it spawned spiraled out of control, filling in background of the original couple that never seemed as effective as the pure scares of the first movie. It ended miserably in 2015 with a sixth installment, “Paranormal Activity: The Ghost Dimension.” Of course, nothing ever dies in the horror business, and Paramount+ sees the launch of “Paranormal Activity: Next of Kin” today, a film related to the first movie in name only.

Emily Bader plays Margot, a young woman who has recently discovered that she was abandoned by a member of an Amish community, and she’s chosen to return to it with a boyfriend, sound guy, and camera to make a documentary about her past. Who was her mother? Why did she leave her? Why are the people who knew her mom so scared to talk about her? Yes, “Next of Kin” is kind of “Scary Amish People” for a bit too long as Margot and her pals stare wide-eyed at the world around them. A scene where they get particularly excited about seeing pigs (gasp) feels almost like parody.

But, of course, there’s more going on in this Amish community than dairy production and a complete lack of Wi-Fi. Margot learns that her mother lived in the room above the one she’s in now, which leads to some disconcerting sounds coming from there in the middle of the night. The best scene in the film's first hour is when Margot investigates and discovers a hidden door, lit only by the kind of night camerawork seen in the still above. It’s the only scene that recalls the creepy effectiveness of the original, wherein the viewer’s eyes dart around the frame, looking for something terrifying before it jumps out.

For the most part, “Next of Kin” is barely a found footage movie. Listen, I’m not trying to be overly critical of an often-malleable form, but one of the benefits of found footage movies is in how they lock us into a POV, forcing us to see a limited frame of action. There are scenes in William Eubank’s movie that have coverage, shot from different angles as if Margot brought a whole crew with her. It almost feels like the script was written in a traditional form and then crammed into the “PA” found footage style because it’s so inconsistent and only rarely employed well. When you're asking yourself who is holding the camera, something about a found footage horror movie isn't working.

To be fair, the final act does go enjoyably off the rails in a way that I admired. Eubank finally gets to unleash some of the visual chaos that made his “Underwater” memorable, as things get truly terrifying for Margot in the last 20 minutes, and it starts to feel more like a “Resident Evil” movie than a “Paranormal Activity” one. Honestly, if you asked people when it was over if it was an “RE” sequel or a “PA” one, they’d probably get it wrong. 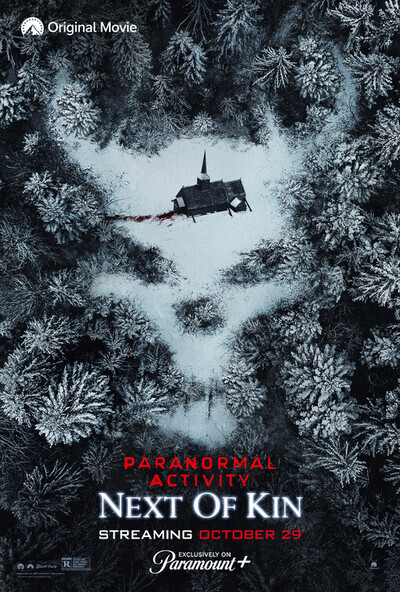