In 1999, “The Blair Witch Project” accomplished something that doesn’t seem possible only 17 years later. The internet was still young enough that a film like this one could come completely out of nowhere and take the world by storm. We weren’t yet exhausted with the conceit of found-footage filmmaking and “The Blair Witch Project” became a truly viral experience, something shared via word-of-mouth, and inevitably turned on via backlash. I saw the film early enough (before release) to experience it without the baggage of expectations and it was remarkably effective. 17 years later, director Adam Wingard and writer Simon Barrett (the team behind “You’re Next” and “The Guest”) take us back into the woods for a straight sequel to that film phenomenon, and we all learn that you really can’t ring the same bell twice.

James (James Allen McCune) has had his life defined by the fact that his sister Heather disappeared while searching for the Blair Witch, and Wingard/Barrett even incorporate the end of that movie—the terrifying house and the man in the corner—into the narrative of this one. A pair of internet personalities have found a DV tape in the woods near where Heather disappeared that shows someone or something racing up the stairs of that infamous house. James is convinced he can see his sister Heather in the footage. Could she still be alive after all this time? He needs answers.

James gathers three friends—Lisa (Callie Hernandez), Ashley (Corbin Reid) and Peter (Brandon Scott)—and the quartet equips themselves with every kind of recording device imaginable. Wingard and Barrett’s most clever take on the material is how much they capture the modern ability to record a moment to death. The team all wear GoPros, allowing for first-person perspectives throughout, but that’s just the beginning. There are iPads used to record, HD cameras strapped to trees, and even a drone that the team proposes they can use to send up for cheap helicopter shots or to orient themselves in the woods. These are kids who are not only amateur filmmakers but have grown up in an era in which documenting multiple angles of their lives is the norm.

The quartet gains two more members in their party when the pair who found the DV tape—Lane (Wes Robinson) and Talia (Valorie Curry)—tag along on the adventure into the deadly woods. There’s some brief set-up, but almost immediately the mood of this “Blair Witch” is different and ineffective. The gang shares the urban legends of the woods—a kid was dragged into the river by a mysterious hand, you can’t look the Blair Witch direct in the face without dying of fear—and we wait until we know things are going to get creepy. The set-up is the same—someone found this footage and assembled it into a horror movie—and while that felt fresh in the first film, it now just kind of drains the piece of tension because we know no one is making it out alive.

Of course, it’s not long before bad things start happening. The first is actually a little unexpected in that Ashley slips in a river they’re crossing and cuts her foot badly, making it harder for her to travel. While that’s a minor problem, the major ones soon surface, often accompanied by screaming and stunningly loud noises. It’s hard to say that the first film was “subtle,” but I’m surprised at how much Wingard goes for shock and awe this time in terms of sound design. It sounds like a bulldozer is going through the woods and knocking over trees. There’s nothing relatably creepy about that. The original built tension off sounds in the distance and that general fear that comes from being in the middle of nowhere. This one seeks to numb you with booming noises while someone plays catch with a GoPro.

There are moments that work. Wingard’s eye is still prominent, even in the found footage concept—such as in the way a bit with an ill-advised tree climb is visually framed or a claustrophobic bit in the final act that I admit I had to turn away from. But the movie gets its most mileage from the minor beats like waking up at 7 a.m. to find it still dark out (remember, time is fluid in these woods) or the production design of a house that looks like it’s literally rotting from the inside. As for the major beats? What’s scarier—someone yelling boo or the sound of someone, or something, whispering it in the distance? “Blair Witch” has plenty of yelling, but not nearly enough that gets under your skin. 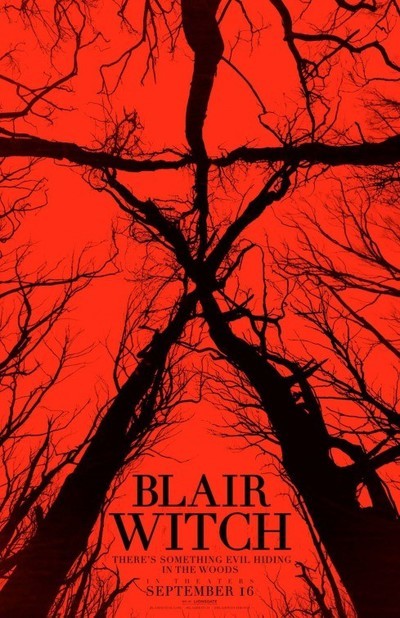 Rated R for language, terror and some disturbing images.