Once Upon a Time in Mexico

After Robert Rodriguez made his $7,000 first film "El Mariachi" (1992) and his $3 million "Desperado" (1995), Quentin Tarantino told him they were the Mexican equivalent of Sergio Leone's first two spaghetti Westerns. After the low-budget ''A Fistful of Dollars'' and ''For a Few Dollars More,'' Leone moved up to bigger budgets for ''The Good, the Bad and the Ugly'' and ''Once Upon a Time in the West'' -- and therefore, Tarantino told his friend, Rodriguez should now make ''Once Upon a Time in Mexico.'' And so he has, for $30 million -- still a relatively modest budget, as action movies go.

Like Leone's movie, the Rodriguez epic is more interested in the moment, in great shots, in surprises and ironic reversals and closeups of sweaty faces, than in a coherent story. Both movies feed on the music of heroism and lament. Both paint their stories in bold, bright colors. Both go for sensational kills; if Clint Eastwood kills three men with one bullet, Salma Hayek kills four men with four knives, all thrown at once. In my review of "Desperado," I praised Rodriguez for his technical skill and creative energy, but said he hadn't learned to structure a story so we cared about what happened.

That's still true in "Once Upon a Time in Mexico," but you know what? I didn't mind. I understood the general outlines of the story, I liked the bold strokes he uses to create the characters, and I was amused by the camera work, which includes a lot of shots that are about themselves.

The actors in a movie like this have to arrive on the screen self-contained; there are flashbacks to their earlier lives, but they explain what happened to them, not who they are. With Antonio Banderas, Salma Hayek and Johnny Depp as his leads, and a supporting cast including Ruben Blades, Eva Mendes, Willem Dafoe and Mickey Rourke, Rodriguez has great faces, bodies, eyes, hair, sneers, snarls and personalities to work with. Banderas is as impassive as Eastwood, Hayek steams with passion, and Johnny Depp steams with something -- maybe fermenting memories of "Pirates of the Caribbean." The plot is at least technically a sequel to the first two movies, once again with El Mariachi as a troubadour with a sideline in killing (early in the movie, he cocks his guitar). I didn't remember the details of the first two films well enough to follow this continuation in detail, but so what? Essentially, El Mariachi (Banderas) is in self-imposed exile after the death of his wife Carolina (Hayek) and their daughter.

Depp, who is a CIA agent of sorts, tracks him down with the help of a talkative bartender (Cheech Marin). He wants El Mariachi to stop a plot against the president by the drug kingpin Barrillo (Dafoe). Mickey Rourke's role is to carry a little dog in his arms, look sinister, and seem capable of more colorful dialogue than the screenplay provides for him. It's time for him to be rehabilitated in a lead.

There are lots of fancy shots in the movie, but nothing quite equals a sensational sequence in which Banderas and Hayek, who are chained together, escape from a high-rise apartment and somehow rappel to the ground with one hanging on while the other swings down to the next level. Neat.

Rodriguez is the one-man band of contemporary filmmakers, making his movies not quite by himself, but almost. His credits here say he "chopped, shot and scored" the movie, as well as writing and directing it, and he personally operated the new Sony 24-fps digital Hi-Def camera. As a skeptic about digital feature photography and a supporter of light through celluloid, I have to admit that this movie looks great. Maybe the camera has been improved, maybe the Boeing digital projectors are a step up from the underpowered Texas Instruments machines, but the picture is bright, crisp and detailed. Maybe it was a little too sharp-edged, since there is something to be said for the tactile softness of celluloid, but it was impressive, and an enormous improvement over what I've seen before, including Rodriguez's own "Spy Kids 2." ("Spy Kids 3-D" doesn't count because of the murkiness inherent in 3-D.) What bubbles beneath all of Rodriguez's work is an impatient joy in the act of filmmaking. He started with hundreds of home movies when he was a kid, made "Desperado" for peanuts and somehow got a studio to buy it, and is still only 35.

He talks about how easy digital filmmaking makes it for him and the actors -- no fussing over lights, no worrying about film costs, lots of freedom to try things different ways. "Once Upon a Time in Mexico" sometimes feels as if he's winging it, but you have to admit he has an instinctive, exuberant feel for moving images. I am not sure a thoughtful and coherent story can be made using his methods, but maybe that's not what he's interested in doing. 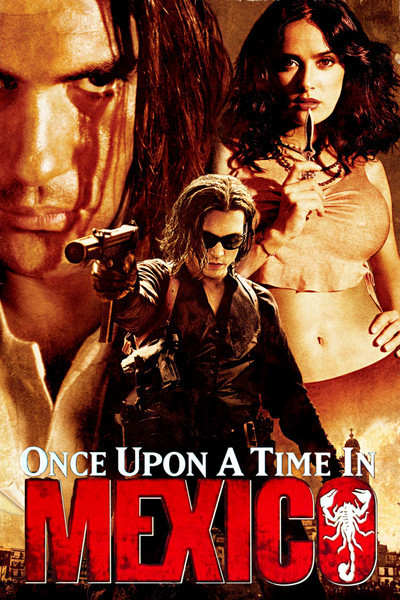 Rated R For Strong Violence and For Language