Once Upon a Deadpool

Once upon a time, the producers of a little film called “Saturday Night Fever” realized that even though it was making tons of money, its "R" rating meant that those poor unfortunate souls who lacked a fake ID, older sibling, permissive parent or a multiplex with lax security were unable to fork over their hard-earned money to see John Travolta strut his stuff. Unwilling to live in such a world, they gallantly recut a new version of the film that removed enough of the fouler language and dicier thematic elements. Although that version of the film is all but impossible to see today, it served its purpose for both younger viewers and studio accountants.

Now, more than four decades later, the makers of “Deadpool 2” have elected to do the same by taking their decidedly R-rated enterprise and recutting it enough to land a PG-13 rating for a brief theatrical reissue just in time for the holidays, now billed as “Once Upon a Deadpool.” This time around, the reasons behind such a seemingly baffling decision—isn’t the whole appeal of the “Deadpool” movies based on the fact that they are unapologetically violent and potty-mouthed?—are a little more complex. Ostensibly, it is being pushed as a charity thing with Fox donating $1 of every ticket sale to the F--- Cancer organization, which, in keeping with the gimmick, has been temporarily renamed Fudge Cancer. That said, there are crasser business concerns at hand as well. With the last-minute bumping of the sci-fi epic “Alita: Battle Angel” from its holiday berth to next February, Fox had a hole in its schedule that such an endeavor could quickly and cheaply fill. Additionally, with the impending purchase of Fox by Disney, such a project could be seen as a test-run for the potential viability of a more family-friendly version of Deadpool without risking too much on such a gamble.

To give all involved a little credit, the result is not just a heavily redacted version of the film that will be playing around the clock on basic cable in a couple of years. A new framework has been added to the mix in the form of an extended homage to the wraparound for “The Princess Bride” in which Deadpool (Ryan Reynolds) sits at the bedside of Fred Savage (Fred Savage) in order to read the story to him. (Okay, technically, Deadpool seems to have kidnapped Savage, but never mind.) After explaining the premise and then immediately trying to see just how far they can push the limits of the new rating (as they demonstrate, sometimes judicious bleeping can make a scene sound much filthier than it actually is), it then plunges into the film proper, albeit without the blood or the swearing, in some cases by using what appears to be alternate versions of scenes and in other cases by dropping scenes entirely.

The results, perhaps not surprisingly, are somewhat mixed. On the one hand, the cutaways to Deadpool and Savage are pretty funny as the two riff on everything from the impending Disney-Fox merger, the way that the films sometimes using the snark factor to cover up lazy writing, and the fact that Savage no longer minds the kissing parts of stories that much anymore. On the other hand, the film itself—I assume no detailed description of it is required here—is still kind of dumb, though its freewheeling weirdness plays a little better than it did in the original. At the same time, if you are a parent who has not allowed your kids to see “Deadpool 2” yet in order to avoid exposing them to such crude and violent material, be advised that even this iteration is insanely inappropriate for the little ones (though I suspect that between DVD, cable and the Internet, kids with any interest in seeing it have probably already done so by now).

Is it worth the bother? I dunno. Those not on the Deadpool bandwagon already will probably not be converted by this version and those who are fans may find it to be a vaguely interesting curio they'll watch once. Yes, there is the charity aspect to consider, but instead of buying a ticket and having a dollar of it donated to Fudge Cancer, you could just as easily donate the full ticket price to the organization and skip the movie altogether. But if you do end up seeing “Once Upon a Deadpool,” be sure to stay through all of the end credits. 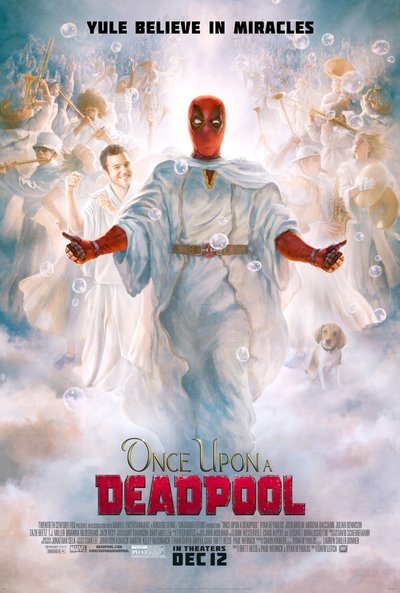