The first sentence of Ian McEwan's 2007 novella On Chesil Beach establishes the tone: "They were young, educated, and both virgins on this, their wedding night, and they lived in a time when a conversation about sexual difficulties was plainly impossible." It's author as social anthropologist. Over and over again, as Florence and Edward thrash their way through a sexual disaster for which they have no context, McEwan keeps up that dry distant tone. The underlying issue is there in the first sentence: If only these two had language to discuss what was happening, perhaps they could have worked it out. Since they have no language, it is a catastrophe which derails two lives. If anyone is to blame in McEwan's book, it is a repressive society, so freaked out by sex it keeps everyone in the dark about the most basic human functions. On Chesil Beach is not peak McEwan, but the tone of the book is key to why it works. How do you transfer that tone into a film? How do you put across the proper sense of distance so that the characters are not just individuals, but representative of a time and place, the pre-sexual revolution 1960s in England? Ian McEwan, who wrote the screenplay for the film, directed by Dominic Cooke, has not solved this problem. The movie is fairly faithful to the book (except for a couple of awful invented scenes at the end), and yet so much is lost in the transfer.

It's 1962, and Florence (Saoirse Ronan) and Edward (Billy Howle), a newly-married couple, have come to a hotel on the Dorset coast for their honeymoon. They sit down to a meal in their room, served by two waiters, and their conversation is alternately exhilarated and awkward. They're like children playing dress-up. They reassure one another how much they love each other, but these words sound increasingly anxious as the night moves forward. The bed looms in the background. Neither knows how to get things going in that direction. Closeups of her hand, clenched tightly in a fist in her lap, illuminate her nerves (or maybe something more). As they chat over roast beef and peas, the story moves into alternating flashbacks, his story, her story, how they met, everything that led them to this moment. The two come from different class backgrounds. Edward's father (Adrian Scarborough) is a teacher, and his mother (Anne-Marie Duff) is a "brain-damaged" artist. Florence comes from a politically active Oxford family (her mother, played by Emily Watson, is friends with Iris Murdoch). Edward and Florence first run into each other at a local meeting of the Campaign for Nuclear Disarmament. They talk a lot. He tries to get her to appreciate Chuck Berry, she tries to get him to appreciate classical music. So far, so good.

But when it's finally legal to take off all of their clothes and get into bed, neither of them know what to do. Sex is supposed to come naturally. But it doesn't. There hasn't been much fooling around beforehand. (In the book, she is repulsed by the sensation of his tongue in her mouth.) Florence has read a book on sex, flinching at the words "penetration" and "engorged." She has no interest in any of it. He's no better off than she is. He aches to have sex, but he has no idea how to help her relax (or that she even needs to be relaxed. This is not him being a jerk. It's him not having the slightest idea how sex works). When "disaster" strikes, she flips out and flees the room. He is hurt and enraged: What is wrong with wanting to have sex on your honeymoon? It would be funny if it weren't so deadly serious. Both actors do a fine job of shading in their characters, but there's only so much they can do.

People sometimes complain when a critic discusses the book on which a film is based. But if a film adaptation goes wrong, it's often because of problems with the adaptation. If you came into "On Chesil Beach" cold, it might look like the story of a tense girl who finds herself unfortunately married to a sexual bully, a guy who has the temerity to feel "entitled" to sex on his honeymoon. But that's not what the book is about. The book is about two sexually ignorant people who have no skills to navigate sex when it goes wrong. They take everything personally when they shouldn't. But they don't know enough. It's a tragedy for both of them. Harold Pinter's screenplay for "The French Lieutenant's Woman" is a great example of dealing with the challenges of adaptation: he invented a modern-day couple, actors playing the Victorian-era characters in a fictionalized film version of the book, and it was such an innovative way to create the "meta" distance so crucial to John Fowles' book. Pinter dealt with the problem of adaptation head-on, giving you at least a whiff of what John Fowles was after. McEwan has not done the same for "On Chesil Beach." Without the historical/economic/social context, the story has no bite.

McEwan's books have been made into films before ("The Cement Garden," "Enduring Love," "Atonement") with varying degrees of success. His obsessive interiority may be, ultimately, untranslatable to film. In Atonement, a book told from multiple points of view, the fabulist child Briony "marched into the labyrinth of her own construction. Her doubts could be neutralized only by plunging in deeper.” (Tasha Robinson did a great analysis of Atonement, movie vs. book, for The AV Club.) Martin Amis has compared McEwan to Joseph Conrad, saying, in one interview, "You think, Wow, to keep your eyes open when most people would be closing theirs. Ian has that. He’s unflinching.” The ending of Atonement is as unflinching as it gets, but the film adaptation softens the blow with an invented scene of a television interview with the elderly Briony, played by Vanessa Redgrave. It's a betrayal of the book's ruthless spirit and McEwan's "unflinching" eye. McEwan writes people into corners and then leaves them there, but movies can't resist giving the characters (and the audience) an escape hatch.

The same thing has happened with "On Chesil Beach," but it's an even more egregious betrayal of the book. In the book, you are left uncertain as to what happened to Florence. In the movie, we are given a glimpse, and, dismayingly, it's a reassuring glimpse. All of the ambiguity of the book's ending is shattered. Even worse, Edward is given a woozy monologue, where he explains to his hippie friends what happened on that wedding night long ago, and, awfully, how we should feel about it. Add to this the old-age makeup on two very young actors, and you're looking at a seriously goofy misstep. The book ends with a bottled-up sense of missed connections, a mourning cry of "If only ..." The movie makes space for resolution, acknowledgement, understanding. In other words, it flinches. 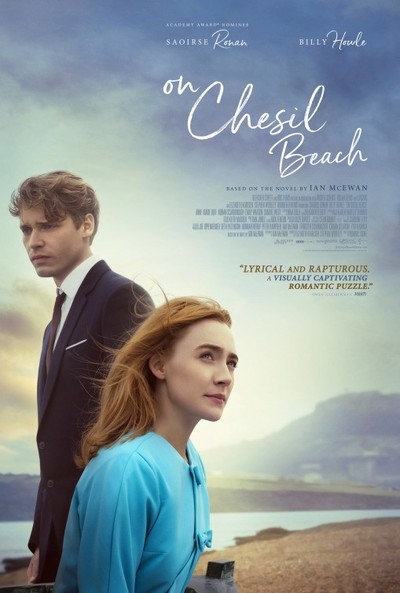