The characters and settings change but the tone remains the same throughout “Nostalgia"—and it is relentlessly somber.

A strong cast giving their all—including Jon Hamm, Ellen Burstyn, Bruce Dern, Catherine Keener and Amber Tamblyn—can’t do much with such heavy-handed, self-serious material. We are expected to dig deep with these people not long after they’ve been introduced to us, but the emotional response the film seeks is rarely earned.

Director Mark Pellington—whose eclectic career ranges from thrillers like “The Mothman Prophecies” to the “U2 3D” concert film to the overly wacky Shirley MacLaine comedy “The Last Word”—explores the significance we place on items from the past to transport us to a particular time or connect us with beloved people. He has said he was inspired to ponder notions of memory and grief in the years following the deaths of both his wife and mother in the mid-2000s. Sadly, what he’s come up with feels like a never-ending dirge.

Pellington is working from an uncharacteristically sentimental screenplay from Alex Ross Perry, known for his biting, incisive and often merciless portrayals of human nature in the independent films he’s written and directed himself, including “The Color Wheel” and “Queen of Earth.” (His latest, which also happens to be opening this month—“Golden Exits”—also features a central character who’s an archivist sorting through the letters, photographs and documents of his late father-in-law’s life.)

Their themes are certainly universal, though. In the process of moving, reorganizing or struggling through the aftermath of our own loved ones’ deaths, who among us hasn’t found a box full of old letters and pictures and gotten sucked down a rabbit hole of laughter and tears? Every once in a while, Pellington hits his target in terms of conveying that sensation with accuracy and insight. But mostly, those moments are lost within the nap-inducing slog that is the film as a whole.

Mercifully, a few scenes crackle with life—particularly the ones featuring Hamm and Keener as siblings who still bicker and tease each other as if they were teenagers. Annalise Basso also brings some much-needed vibrancy as Keener’s college-bound daughter and the voice of reason, who points out that all this stuff is just stuff and it’s not worth agonizing over, especially when so much can be found or stored online now.

But first, we start with Dern’s character: a cantankerous widower named Ronnie who’s unwilling to part with the many items he’s kept crammed into his cramped Los Angeles home over the years. John Ortiz plays a saintly and sympathetic insurance assessor named Daniel who pays him a visit to see whether anything might be of value. He’s there at the request of Ronnie’s pregnant granddaughter (Tamblyn), who’s growing increasingly frustrated with his stubbornness from the comfort of her suburban sprawl.

Then we follow Daniel to the scorched remains of a house owned by Burstyn’s character, a widow named Helen. As Daniel and Helen wander through the ashes and rubble of the place she and her husband called home for 30 years, Helen describes to him the importance of the one item she thought to grab as she was fleeing the flames: a baseball signed by Ted Williams, which has been in her husband’s family for generations.

Then we follow Helen to Las Vegas, where she meets up with a sports memorabilia dealer named Will (Hamm) who can give her an estimate as to the ball’s worth. Will is working through his own grief and loss, of course: the end of his marriage, which has left him in an emotional purgatory nine years later.

But then we follow Will, who must reach back even further into the past when he returns to his abandoned childhood home. There, he and his sister, Donna (Keener), have the task of cleaning out the giant house with its neglected grounds in order to sell it, now that their parents have downsized to a condo in Florida. While he’s there, a tragedy devastates the family and presents yet another sad opportunity to reminisce.

Every stop along the way in this anthology, “Nostalgia” presents a character with an opportunity to rhapsodize about…well, nostalgia. It happens over and over again, and it is not subtle. Everything grinds to a halt for the speechifying—not that the pacing was terribly zippy to begin with—in a way that’s so stilted and self-conscious, it suggests that the material might have been better suited for the stage.

The earnestness of the characters’ platitudes is undoubtedly well-intentioned. From time to time, it may even be cathartic. But it’s also rarely as profound as it aims to be. 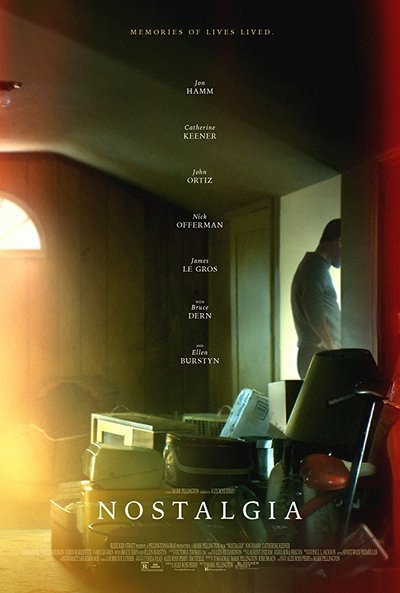