"Golden Exits" made me want to get up and go do something sensible and productive, so as to not be like the characters in the film. That's not a slam so much as an observation about the kinds of people who populate this new feature from writer-director Alex Ross Perry, who's carved out a very particular niche for himself. He chronicles the delusions of the upper-middle class city dwellers that used to be called Yuppies or "Woody Allen characters" back in '80s and '90s, and that were loosely described as "French" in films that appeared regularly in American arthouses during that same period—often chamber dramas that might feature, say, a middle-aged professor who has a younger wife and a much younger mistress who invariably end up staring daggers at each other during a recital. These films are set in a world where job titles like "therapist," "sound engineer" and "archivist" are more common than "waiter," "truck driver" or "police officer," and people spent nearly as much time prefacing what they're about to say as they do saying what's on their mind.

In such features as "The Color Wheel," "Queen of Earth" and the unrelentingly edgy "Listen Up, Phillip" (which is probably the closest we'll ever get to a Philip Roth film that has no connection to Roth), Perry observed this milieu with anthropological care, never letting on whether he approved of characters who kept getting impaled on the spiky plumage of their egos. "Golden Exits" is the quietest, sparest, least action-y film Perry has made yet, to the point where it seems to be the result of a dare somebody made with him: "Can you make an entire feature about people that can't appreciate what they have and are incapable of getting out of their own way?"

The film is set in a small area of Cobble Hill, Brooklyn, not far from where I used to live until a few years ago, at which point I got priced out and had to move. Within a few minutes, the movie has given viewers a frame to put around it: twenty-five year old Australian Naomi (Emily Browning) takes a job assisting a fortysomething archivist named Nick (former Beastie Boy Adam Horowitz, who's excellent) and reawakening the mistrust of his wife Alyssa (Chloë Sevigny), a psychologist, who's still stung by Nick's previous infidelity with younger women; during a lunchtime conversation, Naomi tells her new boss that she would someday "like to write nonfiction accounts of ordinary people" and perhaps turn them into movies, because "people never make films about ordinary people that don't really do anything." Clearly, that's precisely the sort of film you're about to watch for 90 minutes and change.

Nick immediately offers to take Naomi to that kind of movie—an inappropriate offer on its face, considering he's her boss, he's married, and she's at least twenty years younger than he is, plus he tends to get himself in trouble in just these types of situations. This is probably the worst possible time to be releasing a movie with this sort of plot at its center. The spectacle of older men becoming infatuated with women young enough to be their daughters is a subject that's never been far from most Western cinema traditions, American and French dramas in particular. Luckily, Naomi proves to have steel in her spine. She sets boundaries and sticks to them, and when she lets herself be talked into lowering them (as when Nick gets drunk on his birthday, rings her buzzer and passively-aggressively pressures her into letting him come upstairs) she raises them again.

Nick and Naomi's affair-that-probably won't happen is yoked to many parallel plots, all having to do with characters that are struggling to be productive and happy despite feelings of ennui that they can't quite explain. Naomi, Nick and Alyssa all suffer from this affliction, as does Alyssa's sister Gwen (Mary-Louise Parker, stealing the movie, as she tends to do), who hired Nick to go through the collected papers and memorabilia of their recently deceased pack-rat of a father.

Naomi has a sort-of-crush on Buddy (Jason Schwartzman, who's turned literate unctuousness into an aesthetic), a music producer who knew her when she was a girl (he was older, though not Nick-older). Buddy offers to hang out with Naomi as a favor to his mom, but it's immediately clear that he has other designs on her. He initially fails to disclose the gender of the "friend" that he tells his wife Jess (Analeigh Tipton) he's going to meet for a beer, then makes a too-ostentatious show of transparency when he tells her that the friend is female and her name is Naomi. Buddy shares every major character's chronic inability to be happy with where they are and who they're with. So it's not a giant shock when he starts fixating on Naomi, even after assuring her he's not interested in her in that way.

Perry and his regular cinematographer, Sean Price Williams, shoot this story on Super 16mm film, which gives the entire movie a creamy, grainy softness characteristic of features from the pre-Internet era. The neighborhood, the interiors and the characters' faces all have a subtle glow. You get to know the neighborhood so well that you can identify Naomi's house, just one Brooklyn row house among many, when Nick passes it; that's how you know Nick is doomed to go back and try to talk his way upstairs. Perry is perhaps too oblique or evasive for his own good when plotting his characters' stories and elucidating their problems (even for a film that announces itself as a "nothing happens" movie, there's a lot of nothing happening here), and there are too many scenes where characters trade monologues, some of which sound like philosophical position papers. But his direction is unerringly precise, often framing one or two characters as a scene begins, then slowly zooming in or out until the point has been made, avoiding cuts unless absolutely necessary. Visually, the movie seems to be slowly pushing a needle into the lives that it scrutinizes, as if to draw a blood sample and learn what ails the characters.

This is the kind of movie that compels viewers to disclose what sorts of problems they consider important. I'm at a point in my life where, for entirely subjective, personal reasons, I couldn't really relate to any of the characters—except maybe Gwen, who has zero patience for everyone's b.s. even as she dishes out heaping plates of her own, and who eventually snaps and gives Nick the verbal whipping he's been all but begging for. But your mileage may vary, as they say. Naomi tells you up front what kind of movie you're about to see, and she's not wrong. 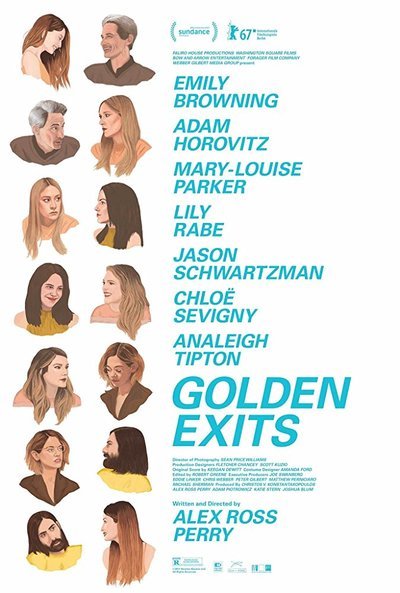 Rated R for some language and sexual references.