Fresh from her television appearance looking aghast at her brother Warren Beatty after the already legendary Best-Picture-flub at the Oscars, Shirley MacLaine is in a new theatrical release. Like too many movies in which the lead performer is over 80 years of age (the great MacLaine will turn 83 in April), “The Last Word” opens with a montage of photographs of said performer in her youth, and young adulthood, in this case doctored to make it look like she spent that adulthood being something other than a great motion picture star.

The movie’s opening proper finds MacLaine standing in front of one of the gabled windows of the spacious house in which her character, Harriet Lauler, lives in comfortable isolation. Seemingly friendless, she haunts the grounds of her property, control-freaking-out both her landscaper (hey, that’s Gedde Watanabe!) and live-in cook (Yvette Freeman). She is sick of life, and so she half-heartedly tries to end it, but after a tetchy confrontation with a physician she’s struck by a notion: to commission her own obituary. So determined, she marches into the offices of her California town’s local paper (which, she reminds its current editor, she saved on many occasions while she made her fortune working in advertising) and demands to meet its obit writer. This turns out to be another woman, a young disaffected one named Anne Sherman, played by Amanda Seyfried. “The thought of leaving my obituary to chance is very unreasonable to me,” Harriet explains to Anne, laying out what she believes to be her bona fides as a “reasonable” woman.

I don’t know how long this movie’s script, by Stuart Ross Fink, has been kicking around, but there’s something distinctly off about Seyfried’s character. Her mien, attitude, mode of dress, all that, suggest she’s a time traveler, come to 2017 America directly from the release date of the first Pixies album. (That would be March 21, 1988.) It’s a testimony to Seyfried’s work that this peculiarity does not necessarily stick in one’s craw as the movie progresses.

And the movie progresses pretty precisely along the lines its premise suggests, if not demands. It is of course A Journey in which a Crusty Older Woman instructs an Unformed Younger Woman in the art of not compromising, and the Unformed Younger Woman instructs the Crusty Older Woman in healing old relationships and forming new ones. And there’s even an adorable underprivileged little African-American girl, Brenda (AnnJewel Lee Dixon) along for the ride, which includes a road trip in which a rapprochement with Harriet’s estranged daughter (Anne Heche) is broached.

This is, among other things, something of a fatty movie. It goes out of its way to hit “beats” that it presumes will be satisfying to a mainstream audience, as when Anne, Harriet, and Brenda bond over McDonald’s food during their road trip. The one mildly unexpected piece of character development comes when Anne encourages Harriet to do something with her modest but choice vinyl collection. This leads to a rhapsody on the joys of hearing a perfectly sequenced radio set, and soon Harriet herself is inveigling the manager of a free-form FM station (there’s that influence from 1988 again) into giving her the “drive time” slot as a DJ. Anne is actually shopping at a used record store when she hear Harriet on the air for the first time. Who goes record shopping between six and eleven in the morning? None of the record stores I used to go to even OPENED before eleven. In any event, it’s in this area that the movie, oddly enough, finds some interesting footing. Director Mark Pellington, who began his career as an in-house rebel at MTV, still has a sharp sense about music and people’s potential relation to it, and Harriet’s DJing sets are a highlight. As are certain quiet, individual scenes between MacLaine and Seyfried. A less expansive treatment of the story might have yielded a less persistently conventional character study, this suggests. But to get to what’s good about “The Last Word” you’re obliged to take it warts and all. 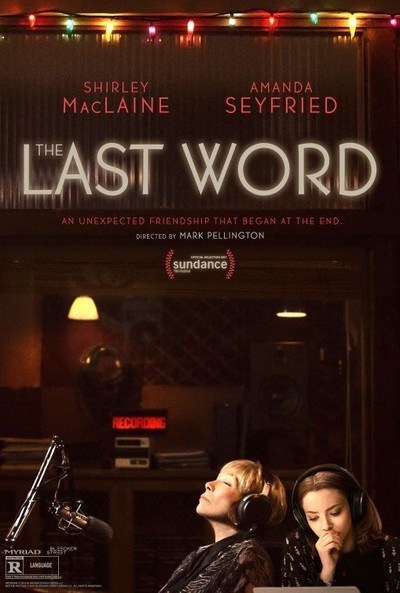 Gedde Watanabe as Louie the gardener