Steven Soderbergh returns to HBO Max this week with a phenomenal genre exercise, an old-fashioned film with one of the sharpest ensembles he’s ever assembled (which is really saying something). Once again, he is interrogating power structures—a theme of films like “High Flying Bird,” “Traffic,” “The Girlfriend Experience,” and so many other greats—embedding sharp social commentary in a story of men with ulterior motives, in which only the truly corrupt come out on top. Soderbergh has always been an incredibly economic filmmaker—there’s no fat on his best movies and no unnecessary cuts or diversions—and this is one of his tightest films, a steel drum of betrayals and twists. For some reason, it feels like the director of modern classics like “Out of Sight” and “The Limey” is still underrated in some circles—take the fact that this film, which would look amazing on the big screen, will primarily be watched on tablets—but history will recognize him as one of the best of his generation, and “No Sudden Move” is just further proof.

“I did not create the river, I am merely paddling the raft,” says a mysterious character late in “No Sudden Move.” We are all in the river. Some will paddle, some will swim, some will drown, and some will push people underwater. To make this point, Soderbergh and writer Ed Solomon set their story against the auto race in Detroit in 1954, bouncing a cast of criminals and auto executives off each other. It starts with the recruitment of a trio of tough guys under the guidance of the mysterious Jones (Brendan Fraser, wonderfully channeling Orson Welles in “The Third Man”). Curt (Don Cheadle) has just been released from prison and needs one good job to get out of town before some of the criminal power players that he’s crossed come after him, including a peculiar figure named Watkins (Bill Duke). He’s partnered with a guy named Ronald (Benicio Del Toro), who happens to be having an affair with Vanessa (Julia Fox), the wife of mob boss Frank Capelli (Ray Liotta). That Ronald and Curt are both on incredibly thin ice with two of the most powerful people in the Motor City is not accidental. They are criminals who need one job to escape with their lives.

Rounding out this trio is the wildcard Charley (Kieran Culkin), who leads the criminals into the home of the milquetoast Matt (David Harbour, doing his best film work to date), taking his wife (Amy Seimetz) and kids (including Noah Jupe) hostage and ordering the low-level employee to retrieve an item from the safe in the office of his boss. They know he'll do it because they know he's sleeping with the boss' secretary. Of course, it’s no spoiler to say this doesn’t go well. Before long, there’s a body, there’s a betrayal, and there’s the potential for more carnage. As Curt and Ronald are forced to think on the fly, the names of Capelli and Watkins filter through their dialogue, representing the criminal powers that control their lives, always in the background, always threatening. Solomon’s script is a classic example of compounding mistakes and hidden motives—nefarious intent always releases skeletons from closets.

“No Sudden Move” feels like it could be almost done about halfway through and then it shifts again to become something else. Solomon's script constantly moves in a subtle manner (not suddenly, of course), following various POVs and strands. Some will find it arguably overly complex as the midsection gets a little cluttered with characters and reveals, but it’s a minor complaint for a film that’s certainly never boring. It's almost more enjoyable when one stops trying to connect the dots and just enjoys the experience from scene to scene. It’s about how often people like Curt, Ronald, and even Matt have to think on the fly, keeping their head above water in that aforementioned river. Without spoilers, it arrives at a fascinatingly cynical and yet truthful place regarding how greed and crime impacts the rich differently than those who made them rich in the first place.

It’s also, of course, a remarkable motion picture in terms of craft. Soderbergh, under the pseudonym Peter Andrews again, gives the movie a unique visual language, sometimes shooting with fisheye lenses that exaggerate the situation in which the characters find themselves, skewing the world around them in a manner that reflects their confusion. The film has great visual set-ups, but they don’t call attention to themselves. It’s succinctly cut and never flashy, as economic in its craft as it is sleek in its storytelling.

There are elements of “No Sudden Move” that taken together almost feel like a Soderbergh Greatest Hits. Not only does it have his sharp cultural insight but it’s a reunion with stars of “Traffic,” “High Flying Bird,” and the TV version of “The Girlfriend Experience,” as well as composer David Holmes of “Out of Sight,” doing great work again here. Of course, it’s also an ensemble crime picture, a genre that Soderbergh returns to every few years and rarely disappoints. It’s a pure joy to watch an expert filmmaker doing what he does so well. "No Sudden Move" is like watching a musician return to the themes and ideas explored throughout a career but with the renewed insight that comes after decades of success.

And yet there’s a ton of brand new life and energy in this great film, even if it’s unmistakably “a Steven Soderbergh movie.” The filmmaker notoriously “retired” for a few years before returning with a more active slate than before his sabbatical. Like the low-power players in the river of “No Sudden Move” who have been lost to history as the auto industry pushed along, the film is a reminder of what might have never been. 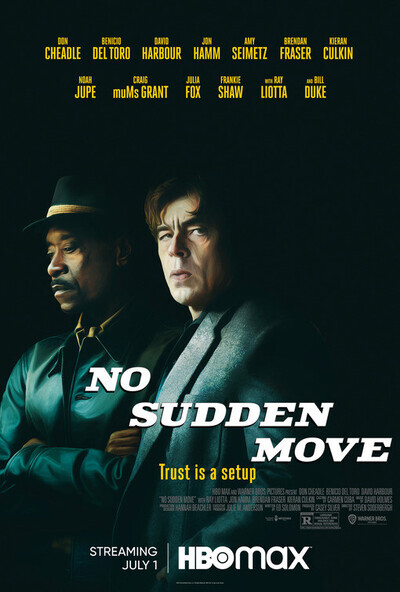 Rated R for language throughout, some violence and sexual references.