“Astonish me!” was the directive that the great dance impresario Serge Diaghilev gave to those who hoped to work with him. It is also what we demand of our best filmmakers. The Iranian director Jafar Panahi, who’s now, to the best of our knowledge, in a prison serving a six-year sentence on charges that don’t amount to a hill of beans in any world that makes sense, is a world-class filmmaker whose work has not astonished like this in some time.

Not entirely his fault, of course. Making films in Iran is never easy, and Panahi has been subjected to constant harassment from the country’s government throughout his career, to the point that he was officially forbidden from making films, and essayed a 2011 work, depicting his house arrest, pointedly titled “This Is Not A Film.” As I observed in a review of his 2015 “Taxi,” “necessity and courage have been the mothers of his cinematic invention.” But the fruits of that invention, enlightening and dispiriting in equal measure, took on a predictable tinge over time.

“No Bears” is a picture that’s in keeping with his recent work—circumstances deemed that it just had to be—but one that breaks away from it in ways that yield a work of, yes, astonishment.

The movie begins with a scene that seems to be from the sort of conventional narrative film Panahi has never really quite made. A man, Bakhtiar (Bakhtiyar Panjeei), summons his girlfriend, Zara (Mina Kavani) from her waitressing duties with good news. He’s gotten her a passport—under a different name—and booked a flight for her to Paris. She’s less than thrilled by the news and dead set on their leaving the country together, not separately. The scene is fraught until the instruction to cut comes not from the actual site of shooting but from a man at a laptop.

That man is Panahi. The director here plays a more overtly fictionalized version of himself than he has in his most recent films. In “No Bears” he has decamped from Tehran to the Iranian village of Joban, near Turkey. His crew is across the Turkish border—Panahi is legally enjoined from leaving Iran—and he is directing his new film remotely. And soon he faces the very prosaic problem of his Wi-Fi going out. He asks one of his hosts for a ladder, in an ultimately quixotic attempt (at least for the time being) to restore his signal. That villager informs him of an interesting ceremony taking place in the village, a prelude to marriage. Panahi feels he needs to keep incognito but is intrigued; he loans one of his cameras to the villager and gives him instructions on how to shoot. Panahi then perfunctorily takes a couple of snapshots.

From this point on, “No Bears” runs on parallel tracks that seem to multiply even as a definite sinking feeling sets in. The story of Bakhtiar and Zara turns out to be a kind of experiment for director Panahi, a reconstruction of a real-life event. And the recording of the ceremony that Panahi passed on opens an entire can of worms in the village. Persian hospitality is legendary and practically sacrosanct, but in one conversation with some of the elders of Joban, one of them says, “I wonder, with all of the beautiful villages around Tehran, and all the nice weather, why would you come to this village so close to the border?” Panahi the artist aims to be a truth teller, but he finds himself practically obligated to prevaricate at every turn.

His desire to be a socially active artist winds up doing far more harm than good. Rather than serving as a light in the darkness, the fictionalized Panahi makes himself more of a potential pariah with every move. This builds to a low-key devastating finale that serves as a rejoinder to contemporary fairy dust about how “movies are magic.” In “No Bears,” image-making is compulsive, and for all intents and purposes a curse. 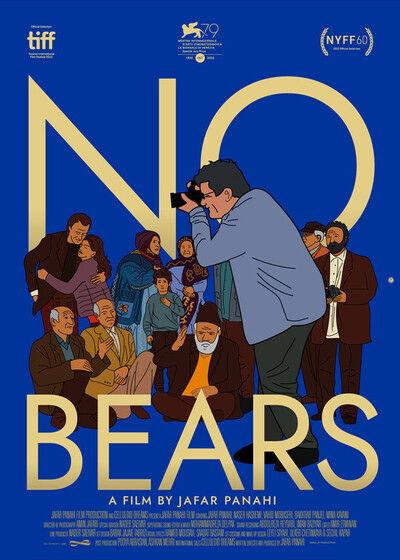 Naser Hashemi as The Sheriff