For many of us critics, “My Spy” was the last screening we attended before COVID-19 shut down the world—including our beloved movie theaters. So it’s unexpectedly welcome to revisit the action comedy now and remember that it’s actually pretty entertaining, besides being an inadvertent time capsule of simpler, happier days.

“My Spy” originally was supposed to open in mid-March and is now available through Amazon streaming for you and your family to enjoy at home. And you will enjoy it, albeit sporadically. The film from director Peter Segal (“Get Smart,” “Naked Gun 33 1/3: The Final Insult”) and written by Erich and Jon Hoeber (“Battleship,” “The Meg”) is pure formula. It’s big, beefy guy meets sweet, cheeky kid, with some espionage and explosions thrown in.

What sets “My Spy” apart from something structurally similar but tonally odious like “Playing With Fire,” for example, is the chemistry between Dave Bautista and Chloe Coleman. Each of them brings way more to the endeavor than it probably deserves. He’s got a wounded vulnerability beneath his hulking persona, she’s got a wisdom beyond her years that never veers into precocious kid territory. And the Hoebers have woven a delightfully weird streak throughout the humor that’ll keep you on your toes. It’s consistently a pleasant surprise in what is otherwise a predictable story.

Bautista stars as JJ, a former Army Ranger/Special Ops bad ass who’s now having a hard time transferring his killing skills and sheer brute strength to the CIA, where his boss (Ken Jeong, amusing in a couple of scenes) informs him that subtlety and finesse are more valuable. After botching a job in Ukraine involving a plutonium deal, JJ is sent undercover to Chicago to surveil the relatives of the bad guy who got away: recently widowed ER nurse Kate (Parisa Fitz-Henley), and her lonely nine-year-old daughter, Sophie (Coleman), who’ve just moved there from Paris for a fresh start. JJ’s partner on the mission is the overeager tech wiz Bobbi (Kristen Schaal, making inspired choices throughout the film), who’s brilliant but has zero field experience. The two hole up in a ratty apartment across the way from Sophie and her mom, but Sophie soon finds their hidden cameras, hunts them down and insists that JJ teach her how to be a spy, or else she’ll blow their cover.

The action element of this action-comedy is extremely perfunctory; what the spies scattered worldwide are looking for, and why, isn’t all that interesting, and the film as a whole nearly drags to a halt when it bothers with an actual plot. Where it comes to life, though, is in the interaction between JJ and Sophie. We see where this relationship is going from the second they discover each other—she needs a father figure, he needs to open his heart—but Coleman and Bautista have such a playful, spiky way with each other, it’s hard not to be charmed. When Sophie blackmails JJ into taking her to an ice-skating party because her mom has to work, we know exactly where it will end up: with this muscular, intimidating beast bumbling and stumbling before ending up flat on his back.

Bautista is subjected to quite a bit of slapstick here, and the former WWE star is certainly more than qualified for such over-the-top physicality, but somehow he also brings glimmers of understatement and even humanity to these moments. (Upending your expectations of him based on his looks is becoming his appealing trademark, from his soulful portrayal of Drax in the “Guardians of the Galaxy” movies to his brief but devastating dramatic turn in “Blade Runner 2049.”) Later, when Sophie drags JJ to school for parents and special friends day, we know that he’ll make a spectacle of himself, but also impress the bullies and mean girls who’ve tormented and excluded her. And no movie like this would be complete without a training montage, including a lie detector test and explosives—and here’s where Coleman’s strong screen presence is so crucial. It would be easy for the “Big Little Lies” co-star to be adorable and annoying, but she stands up to Bautista in quietly steely, persistent ways.

Again, the fact that the PG-13 “My Spy” is willing to go to some dark places along the way makes these obvious developments seem somewhat inspired. It also makes the copious product placement and hit-and-miss pop culture references seem that much more groan-worthy, as does the needless, wedged-in romance between JJ and Sophie’s mom. Still, if you’re stuck at home with some bored, smart-alecky kids of your own, this’ll put a smile on everyone’s faces, at least for a little while. 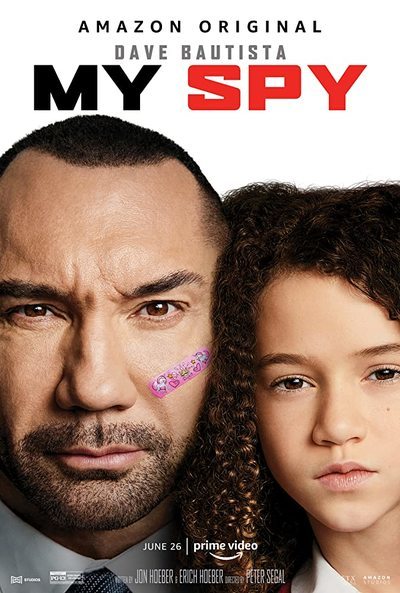 Rated PG-13 for action/violence and language.